It is expected that unused terahertz waves can be applied to high-speed wireless transmission since a wide frequency band can be secured. In this research, we implemented a mixer circuit that applied a unique proprietary high isolation design technology with an Indium phosphide high electron mobility transistor (InP-HEMT). This enlarged the transmission bandwidth, which is a problem in the conventional 300 GHz band wireless front end. It also improved the signal-to-noise ratio (SNR). In addition, using this we realized a 300 GHz band wireless front-end module, and we achieved wireless transmission of 100 Gbps (gigabits per second).

In this research, we realized 100 Gbps wireless transmission with one wave (one carrier), so in the future, we can extend to multiple carriers by making use of the wide frequency band of 300 GHz band, and use spatial multiplexing technology such as MIMO and OAM. It is expected to be an ultra high-speed IC technology that enables high-capacity wireless transmission of 400 gigabits per second. This is about 400 times the current LTE and Wi-Fi, and 40 times 5G, the next-generation mobile communication technology. It is also expected to be a technology that opens up utilization of the unused terahertz wave frequency band in the communications field and non-communication fields.

which will be held in Philadelphia in the United States from June 10 to 15. 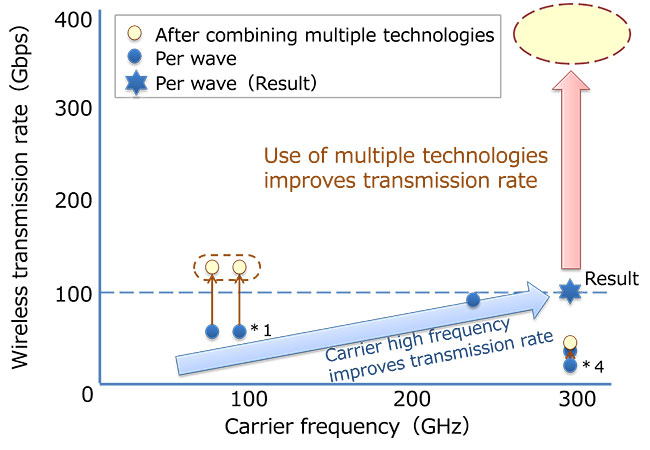 In the carrier frequencies from 28 GHz to 110 GHz that are currently being researched and developed, the transmission bandwidth is limited. So, researchers are studying the use of frequencies which make it easier to expand the transmission band area, from the 300 GHz band to the terahertz wave1 frequency band. The 300 GHz band has a frequency that is 10 or more times higher than the 28 GHz band which is being studied for 5G, which will be the next generation mobile communication technology. With the 300 GHz band, it will be easier to secure a wide transmission bandwidth. On the other hand, with a high frequency, leakage of unnecessary signals between the ports inside the IC and mounting tends to occur, and so far, it has been impossible to obtain a sufficiently high signal-to-noise ratio (SNR)2 . For this reason, even if a 300 GHz band is used, it is impossible to obtain both a wide transmission bandwidth and a high modulation multi-level value at the same time, and so wireless transmission up to now has remained at the rate of several-tens Gbps.

In this research, we devised our own high isolation design technology and applied this technology to a mixer circuit (Fig. 2), which is a key component responsible for frequency conversion in the 300 GHz band wireless front end. We also developed an IC with an indium phosphide high electron mobility transistor (InP-HEMT)3. By applying high isolation design technology, we succeeded in suppressing leakage of unnecessary signals inside each IC and between ports in the IC. We also succeeded in improving signal noise reduction and expanding band width, which had been issues confronting the use of conventional 300 GHz band wireless front end technology up to now. With these technologies, we also realized a 300 GHz band wireless front-end module (Fig. 3), and we confirmed reception of a good 16QAM signal in back-to-back transmission (Fig. 4). In a 300 GHz band, we also confirmed transmission at a speed of 100 Gbps, the first time in the world this speed has been attained (Fig 5). 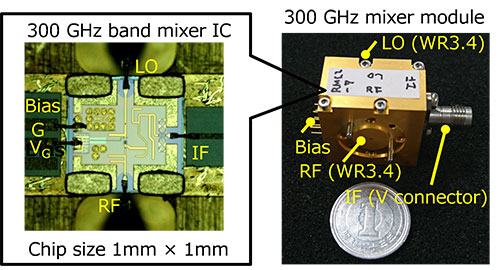 In this research, since we realized 100 Gbps transmission with one wave (one carrier), in the future we will expand our research to use multiple carriers or spatial multiplexing technology such as MIMO and OAM together with this results. With this combination, we expect to attain an ultra high-speed IC technology that enables high-capacity wireless transmission of over 400 Gbps. In addition, we expect that our approach can be applied in various fields such as imaging and sensing in which terahertz waves are expected to be used. Through collaboration with partners, NTT aims to create new services and new industries using ultra high-speed ICs, and it aims to further develop ultra high-speed IC technology.

By adding a quarter-wave line and series capacitance, we were able to create a unique design that dramatically improved isolation between ports. The high isolation characteristics realized in this way can suppress unnecessary signals, contributing not only to improvement of SNR, but also to prevention of deterioration of frequency characteristics when the mixer IC is mounted on a module. As a result, we achieved both broadband characteristics and high SNR characteristics for a wireless front-end module.

This work was supported in part by the research and development program on multi-tens gigabit wireless communication technology at subterahertz frequencies of Ministry of Internal Affairs and Communications, Japan.

Represents the ratio of the power of the signal to the noise.