Invitation to Tokyo Tech: The music of Francis Poulenc

The Institute's concert series for academic year 2018 kicked off with "Evening Concert — Francis Poulenc: Invitation to Tokyo Tech" on April 17. Students, staff, and members of the public filled a 300-seat hall on Ookayama Campus to enjoy two hours of masterpieces created by the French composer. 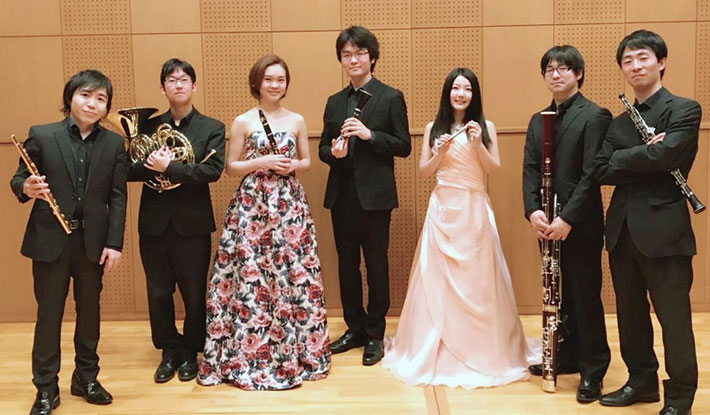 The Tokyo Tech concert series, carefully planned by the Institute's faculty members, features compositions that continuously inspire scientists. While campus concerts generally tend to feature popular, well-known pieces, Tokyo Tech aims to provide more unique content that represents the identity of the Institute and the young performing talents. Past series have featured relatively recent pieces such as Quartet for the End of Time by Frenchman Olivier Messiaen and compositions by Pole Krzysztof Penderecki.

This time, the organizers wanted to communicate the value of music symbolic of early 20th-century Paris, and therefore selected Poulenc, a French composer and pianist. The audience had the opportunity to enjoy Invitation to the Castle, a rarely performed piece of incidental music that is said to encapsulate Poulenc's essence and aesthetic sense. Professional soloists and orchestra performers in their 20s, who in the past were all classmates at the Tokyo University of The Arts, interpreted seven of Poulenc's works.

The next concerts of the series will be held on October 15 and 29. Tokyo Tech's current students and alumni will begin performing from 5:30 p.m. At 7 p.m., they will be joined by professional musicians — the woodwind ensemble Trio d'anches on the 15th, and violinist Miki Kobayashi on the 29th.