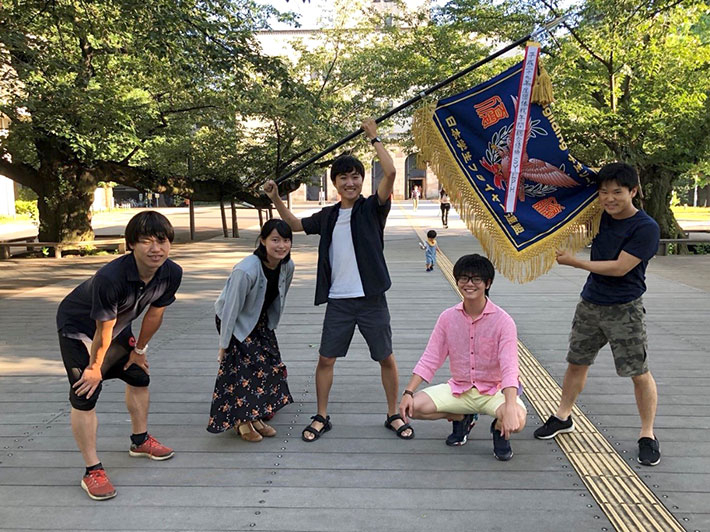 The Paragliding Student League of Japan aims to expand exchanges between student flyers in the country, provide flyers with a chance to improve their skills in a fun environment, and revitalize the sport of paragliding as a whole. The 2017 season included the Mt. Ogamidake Student Cup in late August 2017 and the 22nd Student Championships in Ibaraki Prefecture in late February and early March 2018. The winner of the team category was the group whose three top flyers accumulated the most points in the two competitions.

Sylph dominated the 20 other teams that participated, scoring a total of 75 points. The second-place team accumulated 40 points. 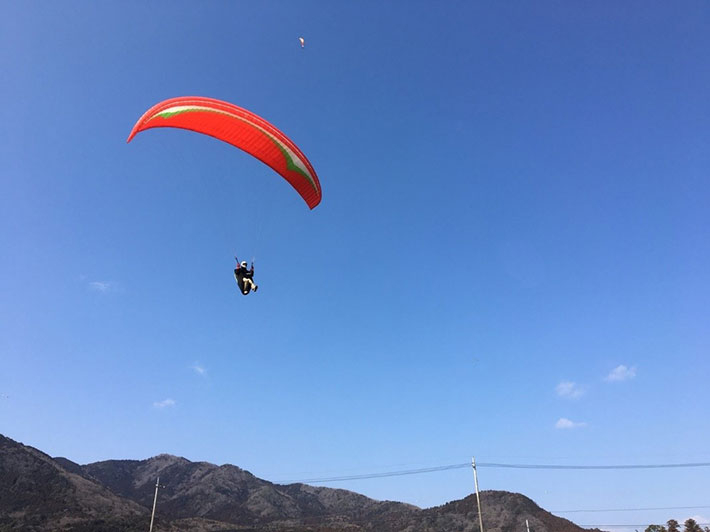 Paraglider going for a soft landing

In paragliding, flyers use an elliptical, inflatable, parachute-like wing to glide through the air. By pulling on controls held in each of the pilot's hands that connect to the left and right sides of the wing, the flyer can control both speed and direction. While gliding performance and speed are slightly lower than with a hang glider, the paraglider still provides a great way to take to the skies. Required practice time is also shorter. While hang glider use generally requires about 20 days of practice, paragliders only require about 8 days.

I competed in the Duration Category, during which flyers aim to maximize their flight time. A paraglider has no motor, so if we don't make use of ascending air currents, we will touch down in about 8 minutes. I manage a 6-hour flight, which was quite tough since the wind-chill factor brought the apparent temperature to below zero. I was actually motivated by the rival flyers around me who just kept going. I won the individual and team categories, and I still remember very clearly the happiness I felt when I stood on the winners' podium. I look forward to flying even higher in my next competition.

Sylph is an official Tokyo Tech student club focusing mainly on hang gliding and paragliding. The club currently includes 30 members from both Tokyo Tech and other universities, many of whom experienced one of these aerial sports only after joining university. The club often practices on weekends and public holidays, traveling to Mt. Ashiozan in the Tsukuba mountain range to get airborne.