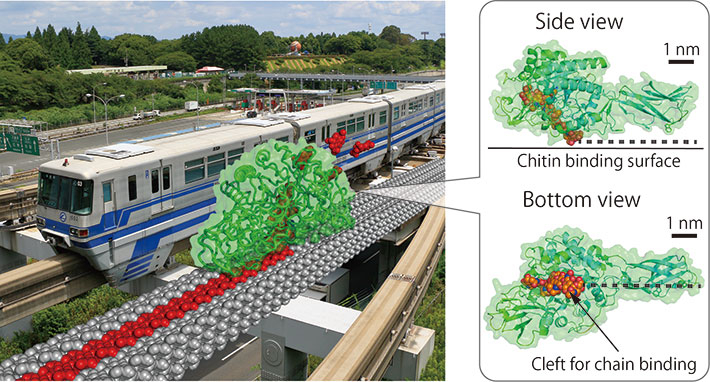 Fictional image of a billion-times magnified SmChiA moving on crystalline chitin like monorail car (left panel) and chitin binding surface and cleft of SmChiA (right panel). SmChiA moves along with single chain of chitin (shown by red) and cut the chitin (rail) into soluble disaccharides.

Molecular motors convert various types of energies into unidirectional mechanical motion. Most of biomolecular motors working in the cell use adenosine triphosphate (ATP) as the chemical energy source. Recently, however, Serratia marcescens chitinase A (SmChiA) has been rediscovered as a molecular motor working in extracellular environments without using ATP. Similar to a monorail car (Fig. 1), SmChiA has cleft-like polysaccharide binding sites and processively hydrolyzes recalcitrant crystalline chitin, a major biomass on earth next to crystalline cellulose, to a water-soluble disaccharide chitobiose. As a tool of biomass conversion to useful chemicals, SmChiA has been extensively studied.

During the processive catalysis and movement on crystalline chitin surface, SmChiA keeps binding with single chitin chain in the catalytic cleft and repeats chemical and mechanical steps. In the chemical step, glycosidic bond is first cleaved and intermediate structure of substrate is hydrolyzed. The reaction product, chitobiose is then released, and the next chitobiose unit is peeled from the crystal surface (decrystallization) accompanied with the forward step. Considering the size of the reaction product chitobiose (~1 nm), SmChiA is expected to move with 1-nm step sizes. Therefore, a single-molecule imaging technique with high precision and speed had been required to resolve the single steps coupled with catalysis.

To understand operation mechanism of fast catalysis and unidirectional motion of SmChiA, Nakamura and co-workers in the Institute for Molecular Science (IMS) analyzed elementary steps of movement coupled with catalysis, using high-precision and high-speed single-molecule imaging probed with gold nanoparticle. They verified fast unidirectional movement (~50 nm s-1) with 1-nm forward and backward steps, consistent with the length of the reaction product chitobiose. Analysis of the kinetic isotope effect revealed that hydrolysis is much faster than decrystallization. Much larger forward step ratio than backward step ratio is explained by the competition between the catalysis (86%) and backward movement (14%), indicating that the movement is rectified forward by fast catalysis (Fig. 2). This is so called "burnt-bridge" mechanism, removing the rail for backward movement and forcing a molecule to move forward. 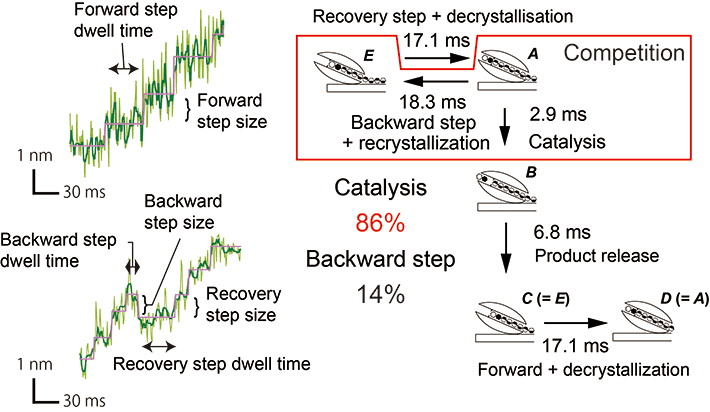 Furthermore, by the collaboration between IMS and Tokyo Institute of Technology, SmChiA was shown to be a "burnt-bridge" Brownian-ratchet, verified by X-ray crystallography and molecular dynamics simulation of the intermediate structures during sliding movement. Decrystallization of single chitin chain is the rate-limiting step of movement achieved by binding free energy at the product binding site, indicated by comparison of free energy differences estimated by the single-molecule analysis with crystalline chitin and theoretical calculation of the binding energy with soluble oligo-saccharide.

The finding demonstrates how SmChiA controls the Brownian motion and extracts fast unidirectional motion for continuous degradation of crystalline chitin without dissociation. The strategy evolved by SmChiA can be applied not only to engineer chitinases and cellulases for more efficient chitin and cellulose degradations, but also to design fast-moving artificial molecular motors such as DNA walkers.

Center for Biological Resources and Informatics,