After more than a year of renovation work in Tokyo Tech's Centennial Hall on Ookayama Campus, the Tokyo Tech Museum took advantage of the iconic building's reopening on August 1 by hosting several new exhibits at the T-POT — the learning commons on the 1st floor — and the facility's basement level.

Faded questions, yet still so relevant

The Entrance Examination Questions from 1924 Exhibit was launched on August 10 to coincide with this year's Open Campus. Despite being aimed mainly at high school students enjoying their summer break, the oldest existing specimens of Tokyo Tech exam questions drew in large crowds of all ages.

Much like today, many hopefuls tried to pass the Institute's entrance exam 94 years ago. The test began with a two-hour English language section and a three-hour section on mathematics. Those who passed these were given a day to rest before they faced the two-hour physics and chemistry components. Current 1st-year students have recently taken on the challenge of solving some of the mathematics and chemistry problems of the past, producing interesting solutions. 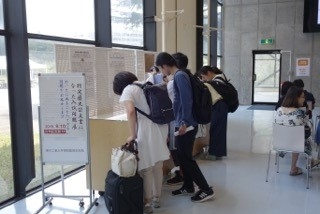 The 1924 entrance examinations were the first to be held away from Kuramae Campus, which was completely destroyed by fires sparked by the Great Kanto Earthquake one year earlier. Many books and documents, including all archived entrance exams from the Kuramae era, were also lost. Therefore, the entrance examinations of 1924 not only provide a rare peek into the challenges faced by prospective students of the past; they also serve as documents that mark a pivotal point in the Institute's history. 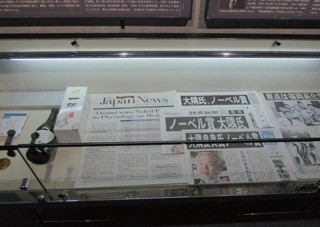 Another exhibit, located in Exhibition Room A on the basement floor, paid tribute to Honorary Professor Yoshinori Ohsumi, the 2016 Nobel laureate for Physiology or Medicine. On display were the Nobel Medal and a replica of the Nobel diploma, a section introducing Ohsumi's discoveries, and newspaper clippings from his student days and the day of his nomination.

This exhibit also included the Nobel Medal received by Dr. Hideki Shirakawa, the 2000 Nobel laureate in Chemistry. Shirakawa, whose achievements will be on show again at the Tokyo Tech Festival in October, is a Tokyo Tech alumni and professor emeritus at the University of Tsukuba. 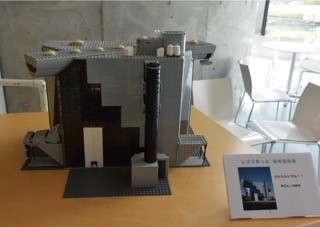 The wooden counter in the T-POT continues to display an interesting exhibit — a LEGO model of Centennial Hall, created by the Institute's LEGO Club. The club actively holds exhibitions and workshops for local schoolchildren to boost their creativity and powers of observation. In addition to Centennial Hall, the LEGO Club has created models of the Ookayama Library, the Main Building, and other architectural achievements on campus under the leadership of current club captain Hidetaka Kamimura, a 3rd-year student in Mechanical Engineering. “The reproduction of the cylindrical and glass portions were both challenging and surprisingly costly due to the transparent parts required,” the club members commented.