Postdoctoral Researcher Tetsuya Kotani, Associate Professor Hitoshi Nakatogawa, Honorary Professor Yoshinori Ohsumi and colleagues at Tokyo Institute of Technology have analyzed the Atg protein1 Atg2, whose function had been completely unknown, and have discovered that Atg2 tethers the pre-autophagosomal membrane to the endoplasmic reticulum during autophagosome formation.

Autophagy is the mechanism which degrades cellular components such as proteins, ribonucleic acids (RNA) and organelles, and is highly conserved from yeast to humans. When autophagy is induced by stresses such as starvation of nutrients, a flattened membrane vesicle called an isolation membrane appears and expands spherically to engulf materials to be degraded, closing to form a double-membrane vesicle called the autophagosome (Figure 1).

The research group analyzed the function of Atg2, one of the Atg proteins playing a role in autophagosome formation in the budding yeast Saccharomyces cerevisiae. Atg2 is a large protein made of 1,592 amino acids, however, any functional domains are not predicted based on the amino acid sequence. It had been known that Atg2 forms a complex with Atg18, a protein which binds to phosphatidylinositol 3-phosphate (PI3P)3, and that this was the last among Atg proteins to localize at the site of autophagosome formation. However, its specific function had remained unknown.

Further, by in vitro experiments using Atg2 purified from yeast cells and liposomes (artifical membrane vesicles), the group demonstrated that both the N- and C-terminal regions of Atg2 have the ability to bind to a membrane, and that Atg2 tethers the two membrane structures together by means of these two membrane-binding regions. They also revealed that the C-terminal region is required for Atg18 to bind to membranes containing PI3P, and that it is required for the Atg2-Atg18 complex to localize to the site of autophagosome formation. 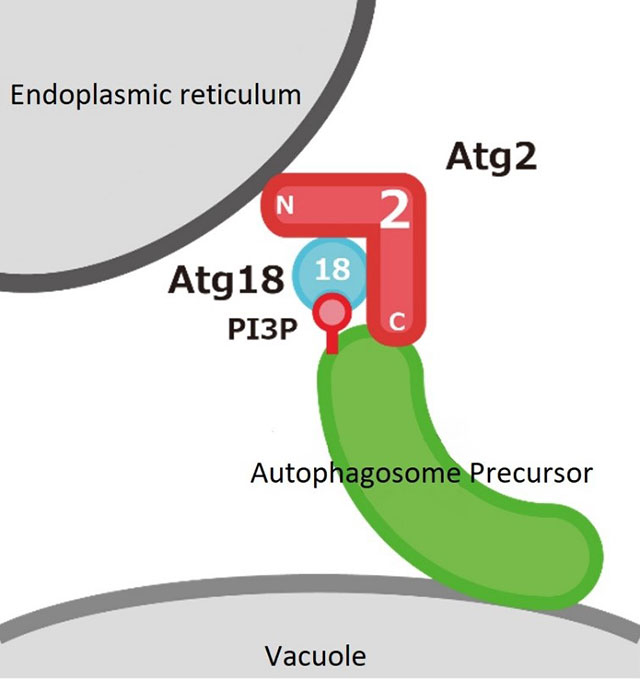 Although the formation of the autophagosome with its double-membrane structure is the most unique feature of autophagy, there remain many questions about this process, such as where the membrane comes from and how it is supplied. Previous reports had suggested that the endoplasmic reticulum supplies the membrane for autophagosome formation. Consistent with this model, this research demonstrated the possibility that Atg2 tethers pre-autophagosomal membrane and the endoplasmic reticulum.

Autophagy is reported to be related to various diseases such as neurodegeneration and cancer. Understanding the mechanism of autophagosome formation is anticipated to provide fundamental information to discovering drugs to treat such autophagy-related diseases.

Autophagy-related protein. Over 40 Atg proteins have been reported so far in budding yeast, among which nineteen are involved in autophagosome formation. Most of these were discovered by the group of Professor Yoshinori Ohsumi, the winner of the Nobel Prize in Physiology or Medicine 2016.

Organelles in the cytoplasm which contain a variety of hydrolases which degrade substances. Lysosomes are present in animal cells, and vacuoles serve this function in plant and yeast cells.