The Tokyo Tech Judo Club welcomed 12 fellow judokas from France's Ecole Polytechnique to Ookayama Campus on October 31 for a memorable training session. Ecole Polytechnique, one of the world's top science and technology institutions, was established in 1794. The Tokyo Tech Judo Club, which itself has a history of over 100 years, has been carrying out exchanges with international counterparts for some time. This time, seven Judo Club members and a number of alumni participated in the day's events.

To kick off the joint training session, the French visitors demonstrated their regular training methods upon request by Tokyo Tech grand master Hiroshi Hasegawa. Each Tokyo Tech student then paired up with a visiting grappler to practice Remma, a traditional Tokyo Tech training method for unbalancing the opponent using a circular technique.

After training, the Ecole Polytechnique students put on their grand uniforms — garments only worn on special occasions. Tokyo Tech Judo Club members took them on a tour of the campus, explaining the history of the Institute while showing them the Gottfried Wagener monument, and introducing to them the main building clock tower and the story of researcher Issac Koga (Issaku Koga). In the evening, the group met several other Ecole Polytechnique judokas who returned from a visit to the Embassy of France. The group enjoyed exchanging views on university life in their home countries, and Tokyo Tech students each received a bottle of French wine as a surprise gift. 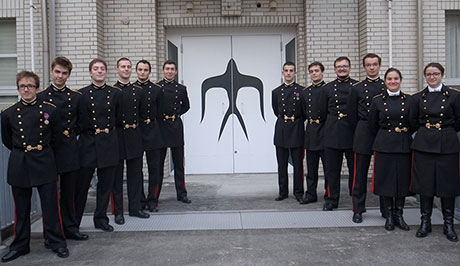 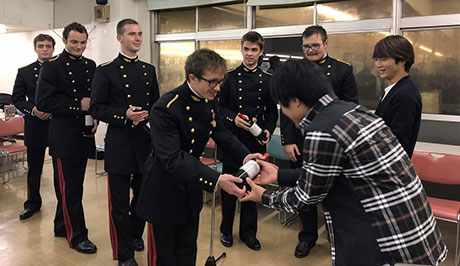 The joint training session with the Ecole Polytechnique judo club was a truly invigorating experience. Despite the geographical and cultural differences between Japan and France, we were able to bridge this gap through the art of judo. At the social gathering, our l'X counterparts sang us songs such as La Marseillaise and Les Champs-Elysees, and our discussions on different cultures helped deepen our friendship. I sincerely hope we have more opportunities like this in the future.

Atsuki Ono currently studies at undergraduate level in the Department of Chemical Science and Engineering. He hopes to make an impact by working for a chemical manufacturer in the future.

As my English is not very good, my verbal communication at this gathering was fairly limited. Still, I felt I was able to connect with our visitors through our mutual interest in judo. At the social gathering after practice, we sang songs together, and that brought us even closer together. I particularly enjoyed joining in the chorus of Les Champs-Elysees. I think if the opportunity presents itself, I would like to go to France and visit the Ecole Polytechnique judo club in the future.

Hiroki Matsui, who is currently a 1st-year student in the 3rd Academic Group, is focusing on the studying of chemistry. He has a particular interest in seawater desalination, and hopes to carry out future research on the topic.

Overall, the event was a great success. A shared passion for judo provided students, particularly 1st-year students, with a platform for international exchange that quickly annulled national and linguistic borders. Tokyo Tech Judo Club members renewed their dedication to study and training, and hope to continue improving themselves using the borderless setting that judo provides. By creating opportunities to train with judokas from around the world, both at Tokyo Tech and at overseas locations, the Judo Club is using its own way to develop professionals who are active on the world stage.