The Laboratory for Design of Social Innovation in Global Networks (DLab), a key component in Tokyo Tech's roadmap going forward as a designated national university, successfully held its inaugural gathering on October 28 at Ookayama Campus.

DLab aims to bring faculty, staff, and students together with members of the public to design an alternate future and ultimately, create a brighter, more prosperous world. By seeking out and openly sharing elements, including technologies and policies, required to realize an image of a desirable future, DLab encourages society to progress together towards shared goals.

Since spring 2018, faculty from Tokyo Tech's six Schools and the Institute for Liberal Arts (ILA) have been discussing the DLab concept with a broad range of contributors — company executives, media professionals, and other parties. At the kickoff event, these DLab members joined Tokyo Tech faculty, staff, students, and alumni, high school students, and other members of society with a passion for dialogue, bringing together over 130 participants. 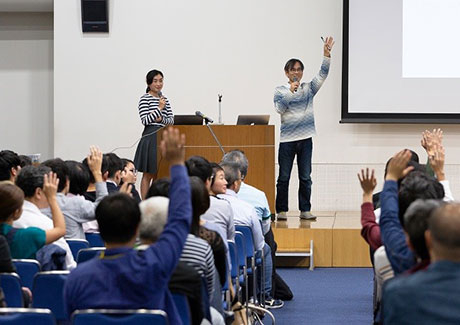 The first event of the day was the Traversing Boundaries Workshop, facilitated by ILA Professor Tamio Nakano and Associate Professor Asa Ito. The objective was to openly discuss, among a wide range of participants, "the future society I want to create." After talks by leading researchers on the latest science and technology and world predictions associated with these developments, participants sat down in world cafe1 style to discuss their thoughts. The aim of the workshop was not to debate, but rather to listen, share, and allow people to discover together how to create something new. 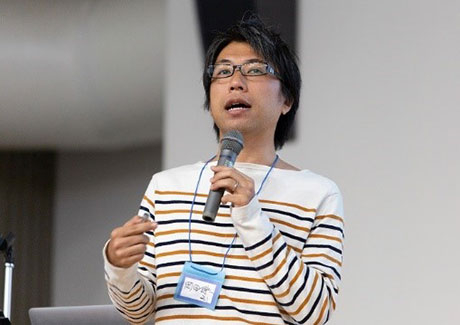 In addition to the facilitators, instigating conversation were three leading faculty members who spoke about developments in their fields. Associate Professor Kenichi Okada from the School of Engineering began by speaking about "Traversing boundaries in wireless communication." Referring to a newspaper article from 1901, he noted that most IT-related predictions for the 20th century had been realized, and that wireless communication in particular had advanced at a staggering speed in the last two decades. Building on Okada's technology narrative, groups shared their views on how they hoped to make use of fifth-generation (5G) wireless networks to alter the world. 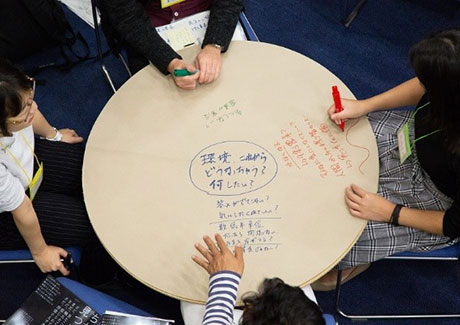 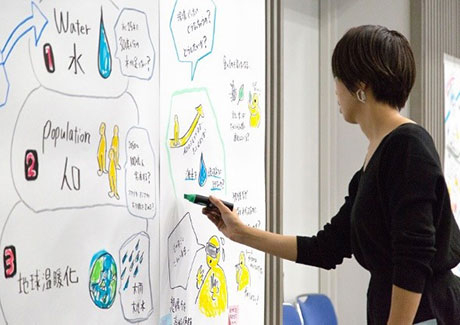 The second talk by Professor Shinjiro Kanae of the School of Environment and Society focused on "Boundaries molding our environment" as defined by predicted water shortages, population growth, and global warming. He urged participants to think carefully about what they really wanted for the future. "Even if you are not changing, the Earth and everything around you is," Kanae emphasized. 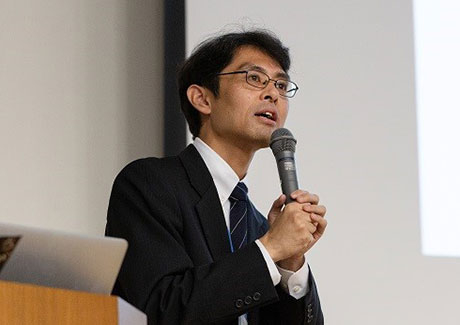 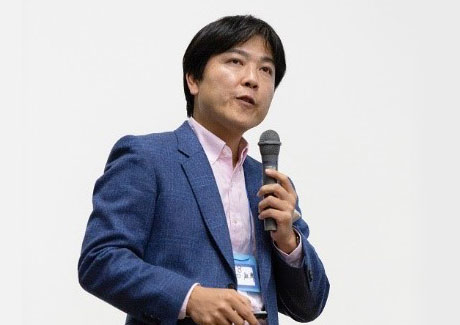 Yamaguchi speaking on mechanism of action and drug discovery

The third expert to share his knowledge was Professor Yuki Yamaguchi of the School of Life Science and Technology, who described "Boundaries in drug discovery." Yamaguchi emphasized the importance of elucidating the mechanism of action of drugs, highlighting thalidomide as a powerful example. He encouraged his audience to think about the difficulty of developing new small-molecule drugs and the problems surrounding current drug discovery including costly large-molecule drugs. 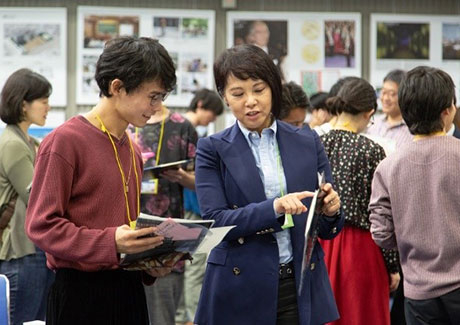 After each speaker, participants exchanged views on the topic in question, brainstormed its effect on human lives, and shared what they would like to see in the future. Attendees shifted to a new group after each talk and harvested fresh ideas before returning to their original groups after the third speaker. Participants then jotted down "my current views on society, the boundaries I want to traverse, and the future I want to create," using both words and images. After completing their designs of the future, participants were free to roam around the venue and continue comparing ideas with others. Opinions from each group were recorded graphically, allowing everyone to absorb the contributions of each team, and in the end reflect on these as one large group.

To conclude, all participants formed a large circle, and volunteers shared the initiatives they intended to pursue. These included a number of student participants, who proposed forming student associations, creating special business cards for Tokyo Tech students, and establishing other venues where open dialogue and the sharing of different values could take place. 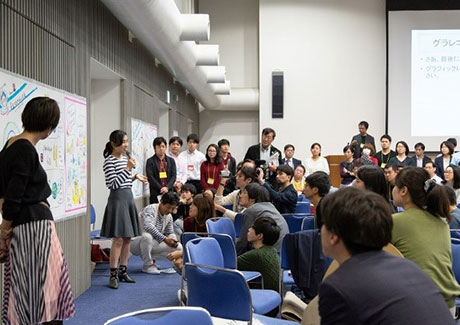 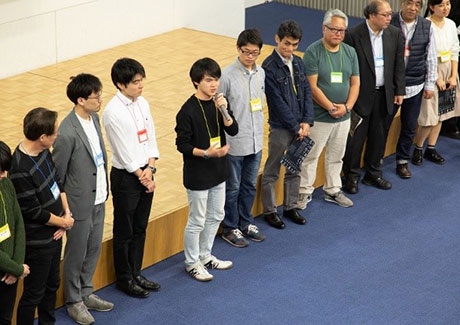 Rather than performing the traditional ippon-jime clap to conclude the event, participants engaged in a synchronized "ippon jump" to symbolize the traversing of boundaries.

Methodology to facilitate large group dialogue first proposed in 1995. In a relaxed cafe-like atmosphere, participants hold several discussion rounds in small groups of 4 to 6, and conclude by harvesting and then reflecting on ideas as a single group.

Method for recording people's ideas and expressions in words, images, and color in real time. At the DLab event, experienced graphic recorder Junko Shimizu was in charge of helping participants visualize their collective intelligence. 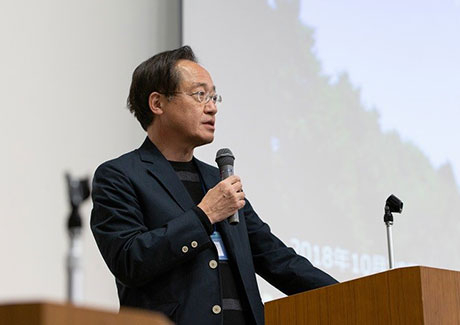 Since commencing his tenure in April 2018, Masu has dedicated ample time engaging and uniting faculty and staff as the Institute continues with rigorous reforms. At a time of constant change, Tokyo Tech's three commitments strengthen a shared sense of value while allowing the community to continue producing outstanding results in education and research. "I feel that, through discussions with high school and university students, we have reiterated the importance of these commitments today," Masu explained. "This session was all about traversing boundaries, leaving behind preconceptions to start designing a new, exciting future. I hope all of you experienced a taste of that today." 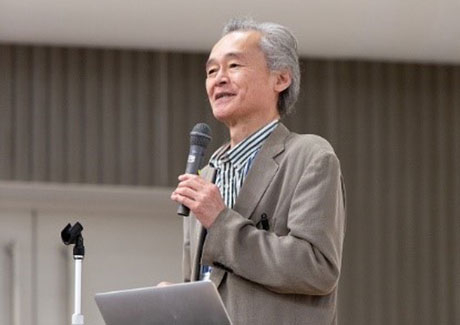 DLab Director Isao Satoh followed with a brief explanation of the structure of the organization. "Rather than picturing how the future should be, I hope we can think together about a future we truly want to create," he said. Satoh expressed hope that DLab would continue to induce active participation by people from all walks of society in future events.

To conclude, ILA Dean Noriyuki Ueda facilitated a brief panel discussion with business and research institute representatives, all DLab members who had participated in the day's activities. They shared their impressions on the inaugural workshop, and spoke about their personal motivations regarding future society. Many said they appreciated the open, encouraging atmosphere and hoped to hear more outspoken opinions from young participants in future sessions. 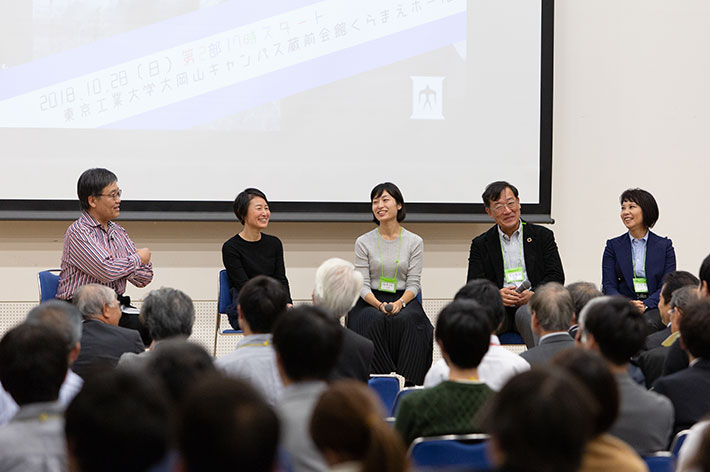 After the completion of the official program, participants continued conversations at the social gathering at Centennial Hall, where graphic recordings and other materials containing the day's ideas were displayed for the following week to ensure that the public had access to DLab's outcomes.

At a time of rapid change, DLab continues to provide an open setting where all members of society can engage in candid, stimulating discussion about a better future for us all.

An alternate future
The Tokyo Tech 2030 statement, consisting of spirit and action, formulated in a series of workshops by members of the Tokyo Tech community

*
This article was updated on December 21.