Dr. Mary A. Voytek, director of the Astrobiology Program at the National Aeronautics and Space Administration (NASA) headquarters, has joined the Earth-Life Science Institute (ELSI) as its executive director.

ELSI, a research institute of Tokyo Tech, was launched in December 2012 as part of the World Premier International Research Center Initiative (WPI) by the Japanese government. Its mission is to establish an internationally recognized, world-class interdisciplinary research institute studying the origins of life in the context of the origin of the Earth and other planets, and to lead in implementing and promoting administrative innovation and organizational excellence. 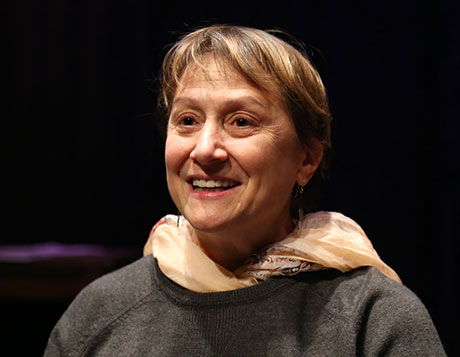 Voytek has been a frequent visitor to ELSI since its early days and one of its global science coordinators since 2015. As described by ELSI Director Kei Hirose, she is well respected in the science community and will help lead ELSI as a manager, a scientist, a program innovator, and someone who can help raise the international profile of the organization by implementing its goals and vision. "Being able to recruit Mary Voytek for this important role is itself a sign that ELSI is developing its world presence and competitiveness," Hirose said, describing her hire as a "strategic addition" for the second half of ELSI's ten-year WPI term.

Voytek said her great interest and excitement about coming to ELSI flow from the nature of the institute and "the opportunity it provides to work in a vibrant research community that is supportive of truly interdisciplinary research."

"I am excited and feel lucky to be part of this unique effort supported by the commitment of the Japanese government to ELSI and the WPI program as a way to evolve science in Japan," she said.

WPI, inaugurated in 2007 by the Ministry of Education, Culture, Sports, Science and Technology (MEXT), aims "to build within Japan ‘globally visible' research centers that promote very high research standards and outstanding research environments, sufficiently attractive to prompt frontline researchers from around the world to want to work in them." Part of that effort explicitly calls for recruitment of scientists and administrators from around the world, and ELSI has been a leader in this outreach. The appointment of Voytek to help administer and direct ELSI is in keeping with that mandate.

The WPI mission also includes a call to experiment with, and potentially adopt, new approaches to managing the research institutes and their host institutions. Voytek brings to that task deep experience in running an important NASA program for ten years. Tokyo Tech President Kazuya Masu has described the hiring of Voytek as an important step in efforts to bring change to the Institute by providing and expanding an "ELSI model" for managing and innovating. In addition to her role as executive director, Voytek will act as special advisor to Masu.

Voytek begins her new position thanks to the Intergovernmental Personnel Act (IPA) program of the United States, agreed between NASA and Columbia University, an ELSI satellite campus where Voytek is an adjunct professor. The agreement between ELSI and Columbia is formally a temporary assignment contract that runs initially for two years and can be extended.

Voytek joined NASA from the United States Geological Survey in Reston, Virginia, where she headed the Microbiology and Molecular Ecology Laboratory. She has degrees in biochemistry, biology, and ocean sciences.

ELSI's new executive director said she intends to learn Japanese and is enamored with many Japanese ways. "I love it here," she said. "My background is Italian and so I tend to effuse. I hope to share my passion for science and collaboration with the staff here and hope to lead with cultural sensitivity and emotional intelligence."