Chor Kleines, Tokyo Tech's choral group and official student club, has won the silver medal at the 71st National Choral Competition, held on November 24 and 25, 2018. The group represented the Tokyo metropolitan area in the university youth category, which competed on the first day of the competition in Sapporo, Hokkaido. 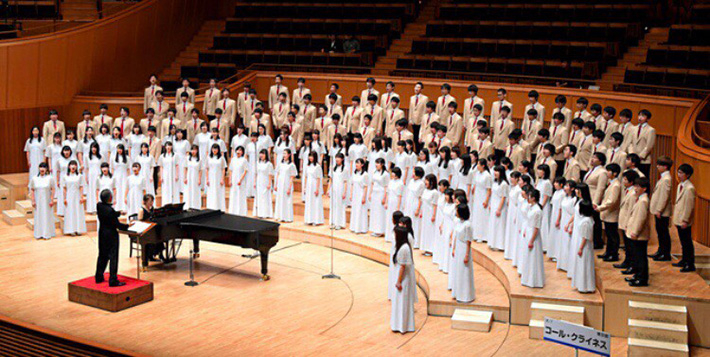 Chor Kleines at the contest

The National Choral Competition has been held annually since 1948, when the Japan Choral Association was established. It is organized into three categories: middle school, high school, and university, company, and community. The last category is further divided into chamber chorus, male or female chorus, mixed chorus, and university youth, the last of which consists of eight or more members under 28 years old.

We were able to maintain our momentum from last year, and again won the silver medal at the National Choral Competition. This award is the result of the daily efforts of all the chorus members. Even during exam periods and amidst our studies, we dedicated ourselves to music, refused to compromise on our practice sessions, and rehearsed as a group until just before the competition. Unfortunately, we fell just short of the gold medal. Still, I feel our group still has a lot of room for growth, and we will continue practicing. We will be performing at the Sumida Triphony Hall on December 27, 2018. Please come and listen to us sing.

Chor Kleines, an official Tokyo Tech student club whose name means “small chorus” in German, only had 30 members when it was established in 1963. Today, this inter-university group consists of approximately 140 members from Tokyo Tech, Ferris University, Seisen University, Japan Women's University, and other higher education institutions. Chor Kleines first joined a choral competition in 1978. It has since participated in 36 National Choral Competitions, winning the gold medal 20 times.