Researchers at Tokyo Tech have developed a low-cost star tracker and Earth sensor made from commercially available components. The star tracker is designed for use with micro-satellites in handling calibration observations, operation verification tests, and long-term performance monitoring during orbit. Embodying the concept of edge computing, the Earth camera performs image recognition while in orbit using a simple AI that identifies land use and vegetation distribution. Utilizing the acquired topography data, assessments can also be conducted using a novel 3-axis attitude estimation method. The star tracker and Earth sensor are installed on the Japan Aerospace Exploration Agency's (JAXA

) Epsilon-4 rocket, scheduled for launch on January 17, 2019 from the Uchinoura Space Center in Kagoshima Prefecture, Japan. 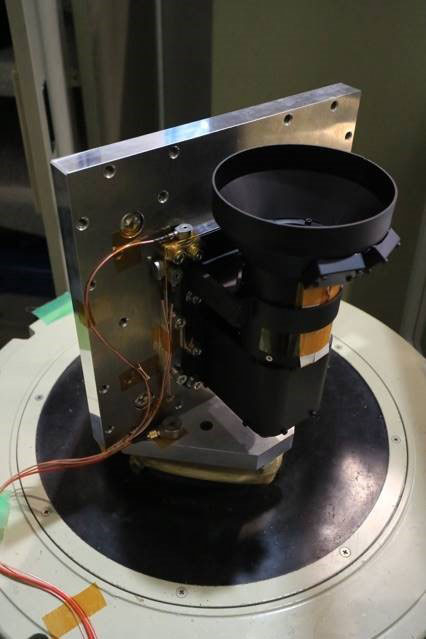 To perform functions such as communicating with ground stations and directing solar cell paddles toward the sun for power and temperature control, satellites use attitude sensors to determine their orientation (attitude). The Tokyo Tech research group led by Assistant Professor Yoichi Yatsu has developed a star tracker and an Earth sensor that uses deep learning to determine attitude in space (Figure 1). With no ground to distinguish directionality, the device constantly tracks multiple fixed stars to achieve high accuracy, while the Earth sensor performs attitude estimation based on images of the Earth.

This Deep Learning Attitude Sensor (DLAS) was developed with three goals in mind. The first is to demonstrate that a low-cost star tracker made from inexpensive, high-performance commercially available components can effectively operate in space. The plan is to capture images of stars in orbit under various conditions to calibrate the sensor system and determine attitude based on novel algorithms, and demonstrate long-term operation with a test period of one year (Figure 2 - Left). 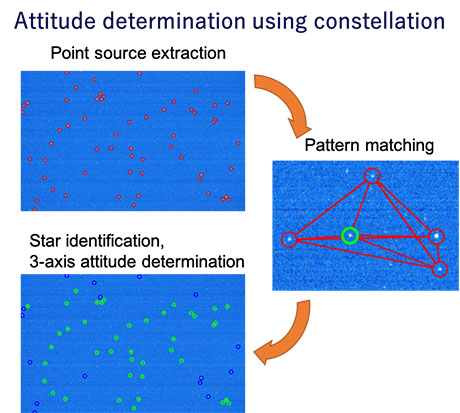 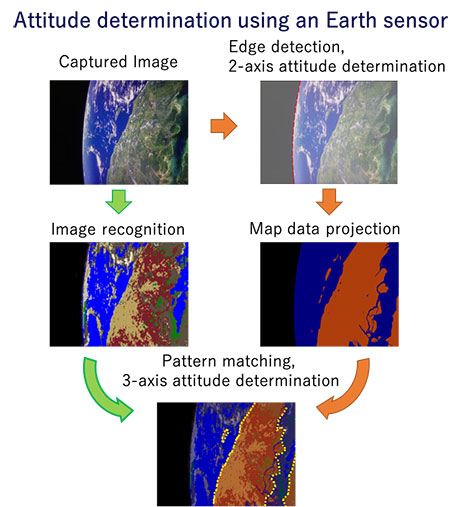 The second goal is to conduct orbital testing of real-time image recognition using deep learning. The Earth is photographed using two compact visible light cameras incorporated in the baffle of the star tracker. The 8-megapixel images taken are processed in about 4 seconds using a specially developed high-speed, lightweight image identification algorithm. Recognition of vegetation and land use is performed over nine categories, including green terrain, deserts, oceans, clouds, and outer space. This will be the first demonstration of real-time image recognition in space using deep learning (Figure 3). In orbit, more than 1,000 images are taken as learning data and transferred to the ground for use in satellite image application tests. The third goal is the application of this image identification technology, and the evaluation of the technologies for estimating 3-axis attitude using land features obscured by clouds and comparing it with map data prerecorded in the onboard computer (Figure 3-Below). 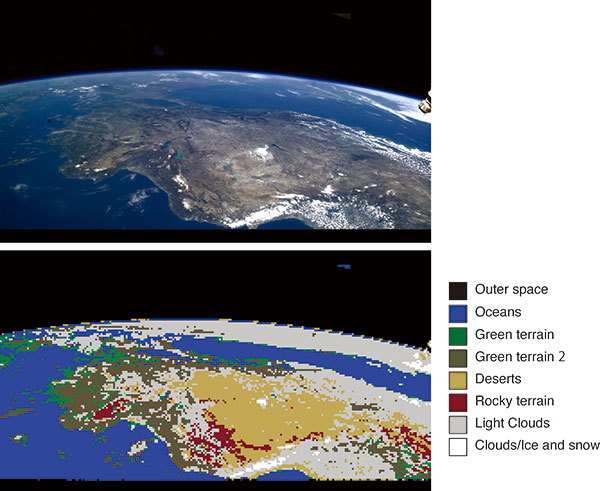 Figure 3. Example of vegetation/land-use identification using an Earth image from the ISS

Hardware development for DLAS completed in April 2018 and was incorporated into the Innovative Satellite Technology Demonstration-1 (RAPIS-1) developed by JAXA (Figure 4). After about six months of system environment testing and operation rehearsals, it will be launched from the JAXA Uchinoura Space Center in Kagoshima Prefecture using Epsilon-4 on January 17, 2019, and will enter into Sun-synchronous orbit at an altitude of 500 km. DLAS operation is scheduled to start after completion of the RAPIS-1 checkout, and after confirming initial operation, each sensor system will undergo calibration for about one month. Afterwards, it will enter into mission operation for one year.

, which is a startup company established by people involved in the development of nanosatellites at the University of Tokyo and Tokyo Tech. This marks a major turning point in Japanese space development, which until now had been led by major electronics manufacturers, and will be a memorable flight operation for those related to private space development, which was "palm size" at universities fifteen years ago. 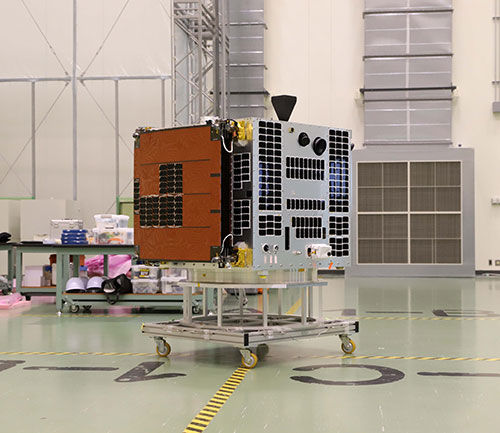 It has been fifteen years since the world's first CubeSats, CUTE-I and X-XI developed by Tokyo Tech and the University of Tokyo, were launched in 2003. Nanosatellites were initially for education purposes. After 2010, these began to be actively used for commercial space projects. Today, more than 200 are launched annually, establishing a new global 1-billion-USD space industry. Since Engineering Technology Demonstration Satellite CUTE-I, research groups from the Kawai Laboratory 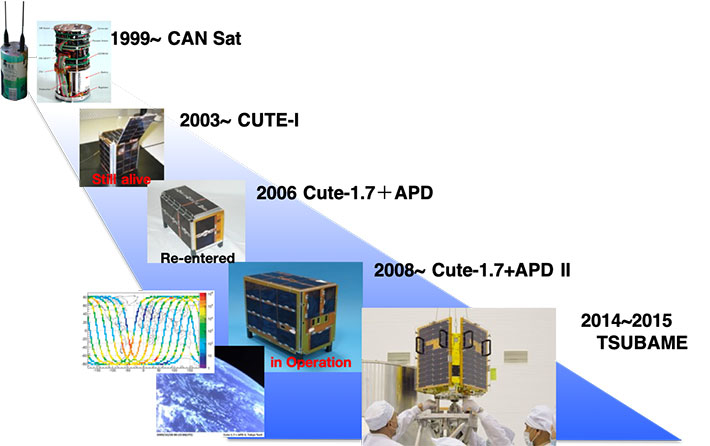 In recent years, due to the development of communication networks (Internet) and computer technologies for connecting satellites with the whole Earth, the new field of discovery known as "time domain astronomy" has opened, which involves research on short-term astronomical phenomena that suddenly appear and disappear. The symbolic target is the gravitational wave phenomenon discovered in August 2017, its electromagnetic wave counterpart was discovered through observation of radio/infrared/optical telescopes, observation satellites, and neutrino detectors all over the world observed simultaneously in response to the detection alert of the position of the gravitational wave telescope. Dr. Yatsu's team plans to monitor a super wide field of 100 square degrees with UV light for which there are almost no observation examples, and conduct research with the aim of discovering initial activity of short-term astrophysical phenomena such as gravitational wave sources and unknown astrophysical events.

Satellites are needed since most UV light is blocked by the atmosphere, but in order to obtain sharp photographs of faint stars, high attitude stability is required. In addition, it is difficult to instantaneously transfer all image data back to the ground due to limitations in satellite communication speed. Therefore, in order to have detailed observation using a combination of the above-mentioned terrestrial telescopes, practical measures need to be developed including transmitting only analysis results such as the accurate position and brightness of a target astronomical object by having image analysis performed in the satellite. To accomplish such an advanced observation mission, it was necessary to acquire a highly accurate star tracker, a highly advanced on-board computer that can be mounted on a satellite, and an automatic image analysis technique that utilizes these.

Astronomical observations from a space telescope require data processing programs such as high-accuracy attitude calculation based on the assumption of cosmic radiation removal, star image detection, star alignment pattern matching, noise contamination, etc., that can also be used as a star tracker, which is an attitude sensor for artificial satellites. Unfortunately, there is currently a lack of attitude system suppliers for nanosatellites in Japan. Therefore, the research team has been developing actual equipment with a view toward commercialization of on-board component development.

On the other hand, ground-based image recognition tests were originally inspired by ground-based weather identification tests. Currently, the Kawai Laboratory has set up robotic telescopes with a diameter of 50 cm in Yamanashi Prefecture and Okayama Prefecture to observe gravitational wave phenomena, gamma-ray bursts, etc. However, observation was often suspended because the weather in Japan is unstable. Therefore, research on a cloud identifier based on deep learning was conducted to improve observation efficiency. The cloud identifier developed in cooperation with Tokyo Tech School of Computing professors Koichi Shinoda and Nakamasa Inoue achieved extremely high accuracy even in the initial prototype stage, and it was believed that it could be applied to instantaneous image identification for orbiting satellites, prompting this study.

Until now, analysis of satellite images using AI generally referred to carefully analyzing large numbers of images accumulated in data servers on the ground using supercomputers, but real-time image recognition on orbiting satellites, i.e. at the computing "edge", has the potential to greatly change the value and operation of the nanosatellite platform. For example, there is a huge amount of information that quickly loses its value if it cannot be quickly determined, such as that in defense, disaster monitoring, and capturing debris. This research was embarked upon to achieve autonomous detection by satellites, in place of human eyes.

(1) Advancing the state-of-the-art in space science

Development of observation satellites aimed at the world's first super wide field ultraviolet survey observation is being carried out through the inheritance of satellite attitude measurement technologies acquired through DLAS and advanced image processing technologies using onboard computers.

In cooperation with the NASA Jet Propulsion Laboratory at the California Institute of Technology, the team plans to employ an ultra-sensitive backside illuminated CMOS imager optimized for ultraviolet color band to achieve required sensitivity. The data processing system, optical system, and satellite bus system will be developed by Tokyo Tech. In parallel with equipment development, discussions of observation strategies are being promoted at Tokyo Tech, Konan University, Tohoku University, the University of Tokyo, California Institute of Technology, Aoyama Gakuin University, and others. According to the current plan, R&D is progressing with a launch goal of 2022 (Figure 6). 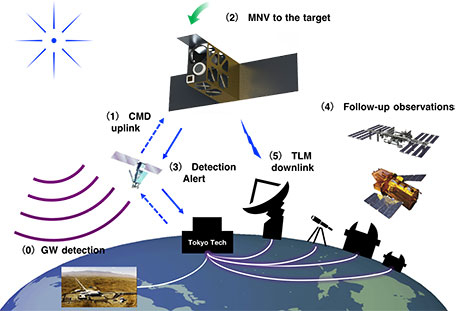 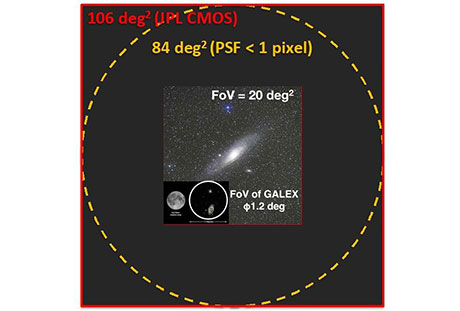 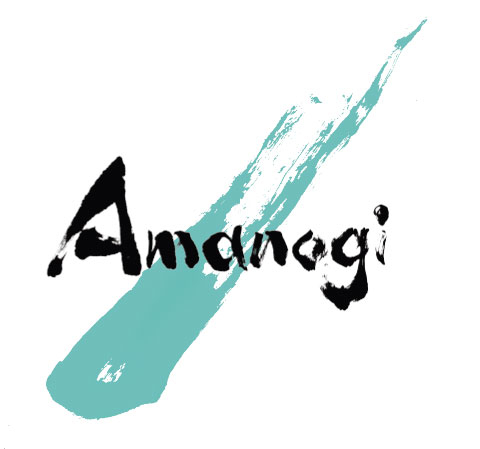 As work on DLAS progresses, various findings are being obtained that can only be learned through actual equipment development such as the star tracker design method, manufacturing techniques, test techniques, ground calibration tests, star matching algorithms, and embedded software. Commercialization of these findings will be actively promoted. Tokyo Tech venture Amanogi

is proceeding with the manufacture and sale of spacecraft mounted devices. This startup has obtained subsidies from NEDO supporting a commercial version of the star tracker, and has also obtained seed financing from the private venture capital companies Innovations and Future Creation Inc. and Darma Tech Labs. Utilizing development knowledge and flight data from DLAS, the goal is to provide inexpensive but reliable satellite-mounted products to the market at an early stage. In the product version, development of a star tracker for CubeSats is being considered to meet demand by private space business operators, and it was decided to install a demo device on Innovative Satellite Technology Demonstration-2. The present goal is to start accepting orders in 2020 (Figure 7).

Conventional space equipment and system designs rely on computer technologies that are 10 to 20 years behind what is used on the ground in order to ensure high reliability. However, when it comes to nanosatellites where many are released within a short cycle, state-of-the-art IoT technology and computational systems such as DLAS can be applied. It is projected that a combination of variable structures such as computer science, extension, and development are needed to overcome the limitation on payload size, the one drawback of nanosatellites, and realize more advanced space utilization. The research team led by Professor Saburo Matsunaga of Tokyo Tech will promote the formation of a development base for "smarter" space systems with an eye toward such space equipment.

In this project, the aim is to realize smart space equipment by 1) carrying out development of attitude/observation sensors that use machine learning based on the application of DLAS information, lightweight and highly rigid contractible booms and arrays, satellite-mounted equipment such as deployable antennas for high-speed communication, and a "HIBARI" nanosatellite with a variable shape function that verifies a new attitude control method capable of achieving both quick change and high orientation stability, and 2) share orbital observation data and processing technology, and provide services such as shared use of test operation facilities such as a cobalt 60 irradiation chamber. Further aims are to support creation and development of new business by 3) creating industry-academia cooperation models and industry-academia networks, and 4) supporting young researchers through hands-on learning. This initiative was adopted as the MEXT commission on the promotion of aerospace science and technology "Research and development center for smart space equipment and systems that create a new space industry" (started August 31, 2018, scheduled for completion at the end of Fiscal 2020), and activities started. As the main executing institution, Tokyo Tech (Saburo Matsunaga (representative), Hiroshi Furuya, Yoichi Yatsu, and Noriyosu Hayashizaki) is promoting the project jointly with Nihon University (Yasuyuki Miyazaki), TechSol (Kazuyuki Nakamura), SAKASE ADTECH (Akihito Watanabe), and Amanogi (Hiroshi Kudo), and technical support and feedback for future direction are received from many other research collaborators (participants being recruited from time to time) consisting of universities, research institutes, and companies (Figure 8). 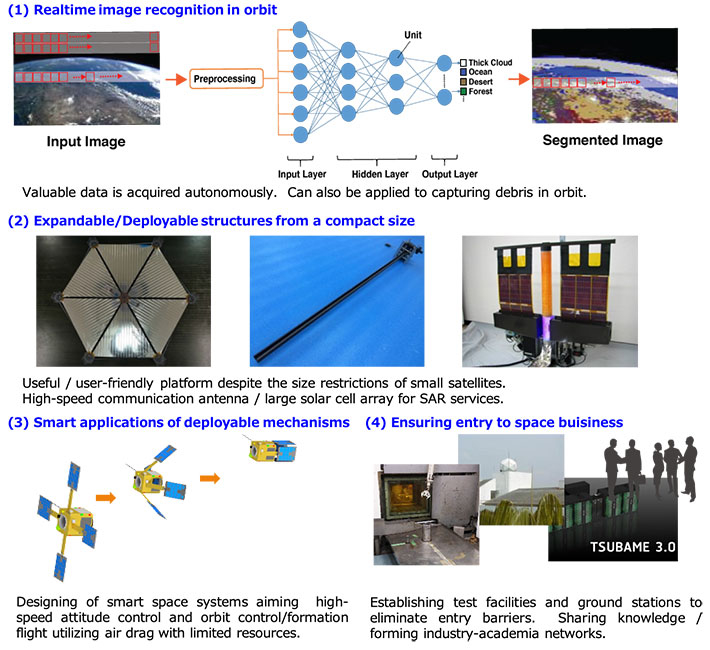