Planning ahead: A new robust approach for minimizing costs in power-distribution networks

Scientists at Tokyo Tech have developed a new method for scheduling the turning on and off of power generators that minimizes costs and ensures reliability while addressing the issues prevalent in multiple previous methods. 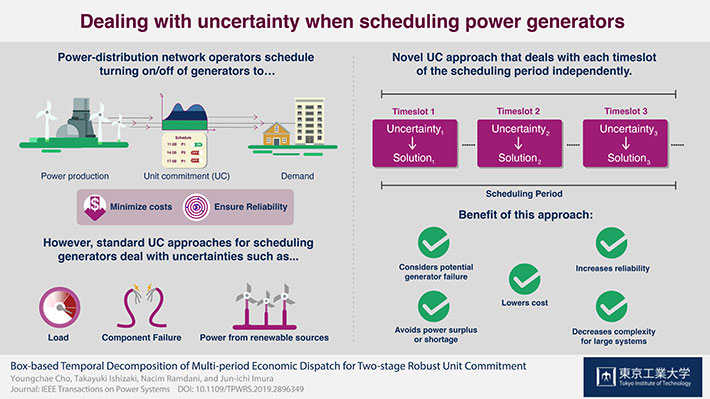 While it is somewhat common for us to take the electricity delivered to our homes for granted, there is a lot happening behind the scenes to ensure that electrical power is available to everyone on demand. Just like many other types of machinery, generators have start-up and shut-down times and associated costs. Because multiple generators are generally available at any given point and they cannot be turned on or off quickly, network operators usually schedule these "on" and "off" operations in advance according to predicted loads in order to reduce these costs. These schedules are made based on mathematical models and strategies that deal with a tradeoff involving minimizing costs and saving energy on the one hand and ensuring reliability on the other.

One such family of mathematical optimization problems is referred to as "unit commitment (UC)" and has been used to determine the required states (on/off) of generators in power systems. As mentioned before, these problems and the schedule are determined in advance, which implies having to deal with uncertainty in multiple variables across the board, such as load, generator availability and failures, and renewable energy input. Available methods to devise such schedules have several disadvantages. Some of them take the scheduled period as a whole and require taking into account the dynamics of the generators and uncertain variables, but this uncertainty is usually not properly addressed and overly conservative schedules are obtained. Other methods are unable to deal with energy storage systems, which are essential for renewable energy technologies.

Considering these problems, a team of researchers from Tokyo Tech, led by Professor Jun-ichi Imura, developed a novel UC method with an interesting twist to overcome the abovementioned issues. "The proposed method has advantages over previous UC methods in several ways and explicitly addresses their main issues," explains Imura. In their approach, instead of taking the scheduled period as a whole and having to deal with system dynamics, the period is divided into timeslots to be dealt with (optimized for) individually in "real time". To do this, the uncertain values in the model are independently given upper and lower limits for each timeslot, and the interplay of these limits and other constraints are used to derive feasible optimal solutions. What's more, the method can be adjusted to consider potential generator outages.

The team conducted simulations to demonstrate how the proposed method works and compared its results with those obtained using existing methods. Unlike previously reported approaches, their method was completely reliable and did not result in any power surplus or shortage. "The proposed method represents a practical framework for non-anticipative and robust UC," concludes Mr. Cho, the lead author of the paper that explains the team's efforts.

The researchers will continue working on various aspects of their new approach, such as on other ways to calculate the limits for the uncertain variables for each timeslot, to further improve the results. The development and implementation of such efficient strategies in power-distribution networks will ensure that we all have access to cheap and reliable electricity for all the electric and electronic devices that we've grown accustomed to, rely on, and love.