Tokyo Tech hosted its first Hult Prize competition on Ookayama Campus on December 8. Team ITHE were crowned the winners with their idea of building a platform that enables creators to outsource all steps of product development.

Held annually since 2009, the Hult Prize is a year-long competition that crowdsources ideas from university students after challenging them to solve a pressing social issue. The global winners receive one million US dollars as seed capital to start their social enterprise. This year's contest focuses on youth unemployment. It challenges students to "build the foundations of a venture that will provide meaningful work for 10,000 youth within the next decade." 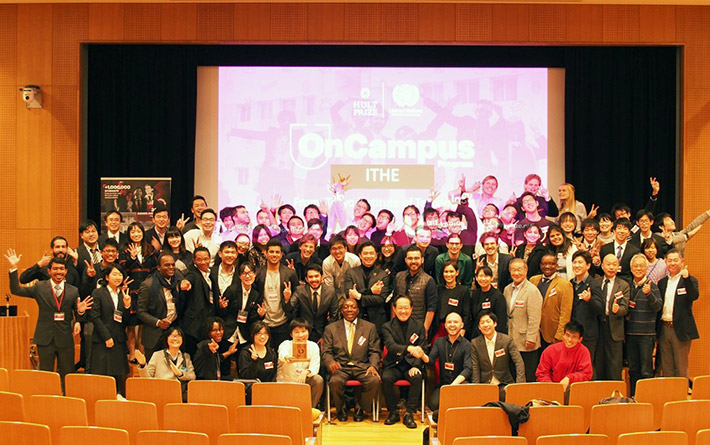 On the day of the event, 17 Tokyo Tech teams presented their ideas on how to alleviate the youth unemployment problem in front of judges from both within and outside the Institute. The winning team, ITHE, will join competitors from around the world at the regional finals in Melbourne, Australia in April 2019. 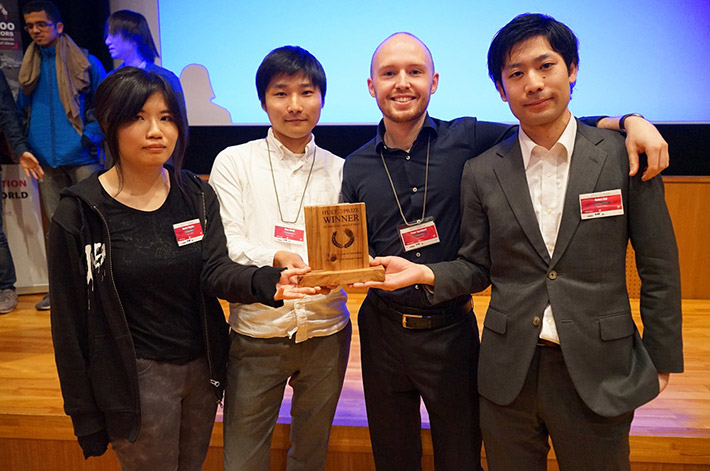 Team ITHE want to provide young changemakers with the tools they need to turn their idea into reality. Finding the right partners is almost always a major hurdle for new projects.

The team will provide a web service where users can create a detailed workflow for their ideas and search for the right people or organizations to fill the skill gaps. People will also be able to search for workflows to which they can contribute. Distribution of profits and accounting can be handled on the platform. ITHE members believe that this will significantly lower the burden for young entrepreneurs, and allow individuals and small businesses easier access to new opportunities.

The future of companies is not monolithic, but highly distributed, according to ITHE. The current trend, for example with Uber, is that employees at the bottom have no way to grow as people. The team wants to change this trend by not only supplying people with diverse opportunities in their field, but also by giving them the chance to learn from others they connect with through the workflow.

I am very glad our team ITHE won the Hult Prize at Tokyo Tech. This is the first time the Institute has held Hult OnCampus, and I really appreciate those who have supported this event.

Hult Prize at Tokyo Tech will allow our team, made up of information engineering and affective engineering students, to spread an idea that we have planning and polishing for a long time. There are many ideas in the world. To keep our ideas from being buried and lost, I'd like to keep asking questions as to what our identity is and what kind of value we should offer.

I will continue pushing forward until our next pitch.

In addition to ITHE, two other finalist teams were selected to represent Tokyo Tech at other regional summits. Team AJIL, selected for the regionals in Tokyo, want to increase the profits of sheepherders in Mongolia by increasing efficiency. Team Kizuna will present their idea of better connecting local guides with foreign travelers at the Paris regionals. 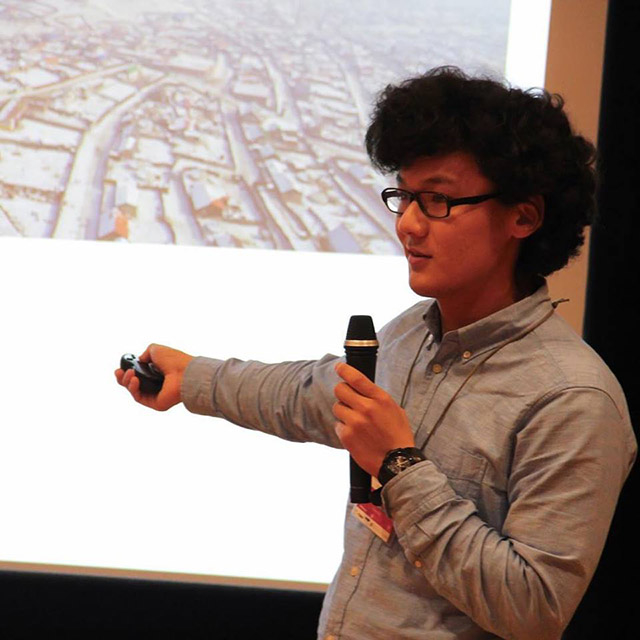 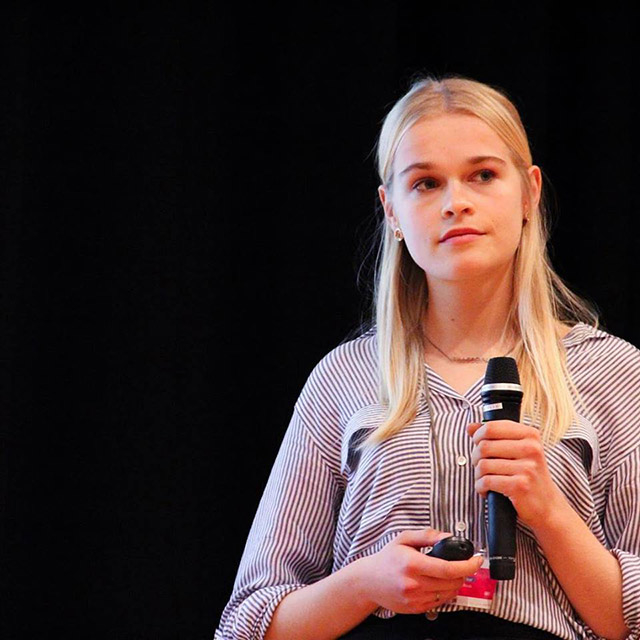 What is the Hult Prize?

The Hult Prize began in 2009 as the brainchild of Hult International Business School MBA student Ahmad Ashkar, who wanted to leverage the crowd to generate startup ideas from young people and sustainably solve the world's most critical social challenges. In 10 years, the prize has developed into a movement that has deployed over 50 million US dollars into helping solve problems in food security, water access, energy, education, healthcare, and housing. Contests have engaged over one million young people from 1,200 universities in over 100 countries across the world. Former US President Bill Clinton, who selects the topic for each year, noted in an interview with TIME Magazine that the prize is one of the top five ideas that are changing the world for the better.

The first Hult Prize competition at Tokyo Tech was organized by a team led by Grace Kagho, a 2nd-year master's student in Transdisciplinary Science and Engineering, six other Tokyo Tech students studying at various levels, and one faculty member acting as an advisor. Tokyo Tech's participation in the contested is supported by companies with strong ties to the Institute, including Gurunavi. Inc. and Innovations and Future Creation Inc. 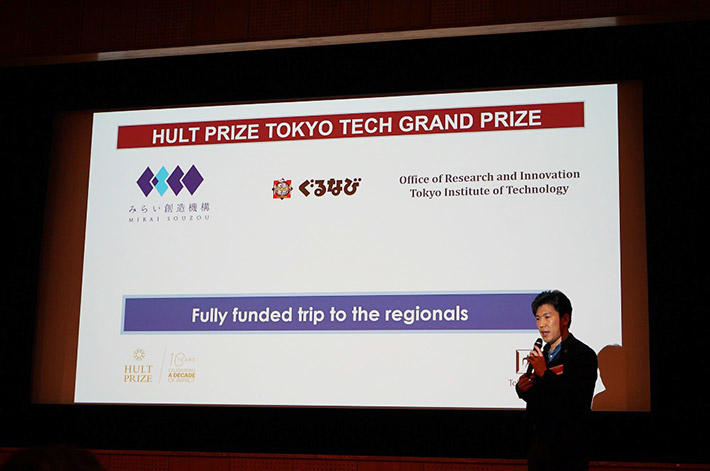 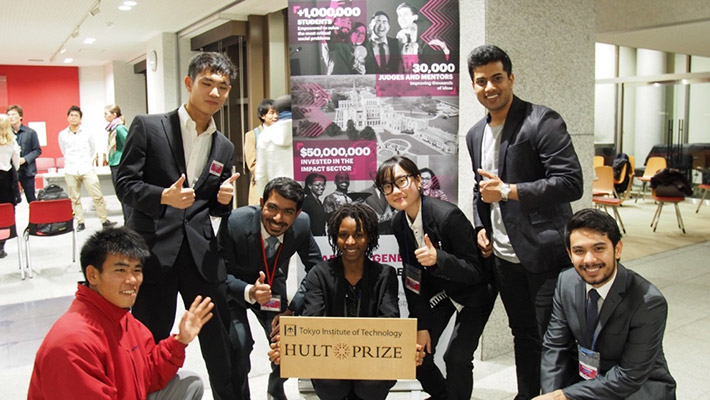 Kagho (center) with other student organizers

Tokyo Tech students are amazing and have shown how much impact we want to make in the world. It has been an exciting experience working with everyone to organize such a platform for sharing and developing ideas to change the world.