A collaborative study between Tokyo Tech and the University of Tokyo reports a series of green fluorescent protein-based glucose indicators that will aid investigations of energy metabolism in living cells. Named Green Glifons, these indicators are the first of their kind designed to be suitable for live imaging of mammalian cells and for simultaneous imaging alongside other color indicators. 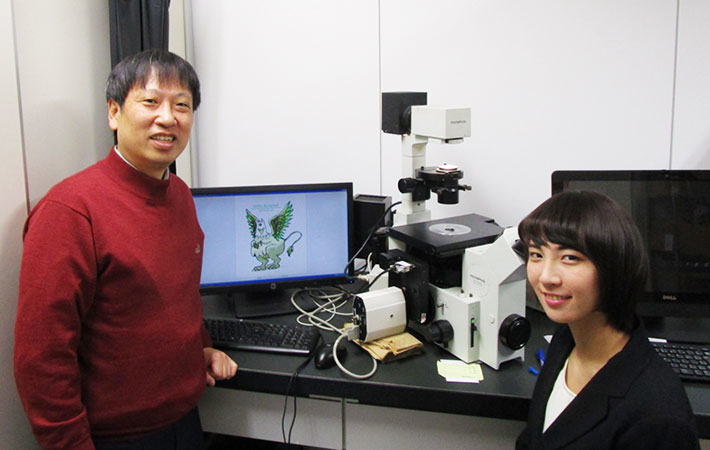 In their study published in the journal Analytical Chemistry, researchers including Tetsuya Kitaguchi of Tokyo Tech's Laboratory for Chemistry and Life Science showed that the sensors achieved up to a seven-fold increase in fluorescent brightness in response to glucose.

They say that their achievement expands the toolkit for monitoring glucose dynamics, enabling cell biologists to visualize many molecules in particular cells of interest at the same time.

"Many scientists would like to image multiple molecules in the same cells using different color indicators in order to study their spatial and temporal interaction," Kitaguchi says. "That's why we need sensors that can be easily applied to multicolor imaging."

Based on their accumulated expertise in biosensor design and development, the team created three types of Glifons capable of visualizing a very useful range of glucose concentrations, from hundreds of micromolar to tens of millimolar concentrations. Named Green Glifon50, Green Glifon600 and Green Glifon4000, the three sensors have EC50 values1 of 50 μM, 600 μM and 4,000 μM respectively.

They then demonstrated that all three Glifons can be applied to visualize glucose in different parts of the cell such as the cytoplasm, nucleus and mitochondria of live HeLa cells2. 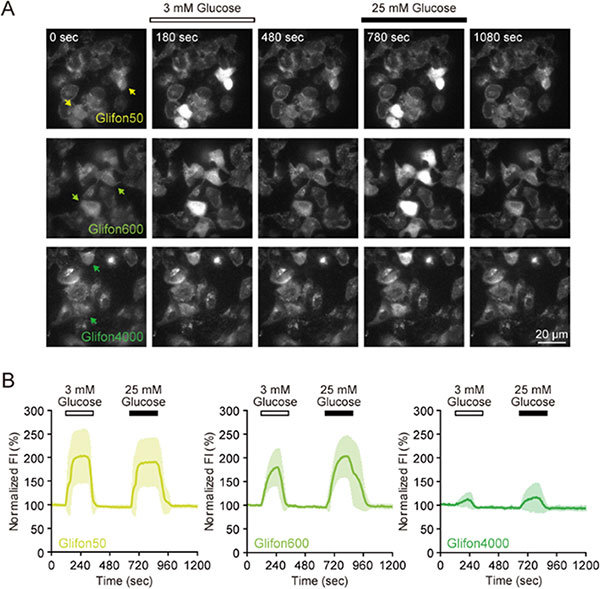 They also confirmed that their sensors are suitable for dual color imaging. Tests using mouse pancreatic beta cells revealed that Green Glifons can be easily used to visualize glucose alongside the red fluorescent calcium indicator, Rhod-2.

To verify whether Glifons are suitable for real-time live cell imaging, they conducted experiments using the roundworm Caenorhabditis elegans as an animal model. They succeeded in observing an increase in fluorescence intensity of Green Glifon4000 in the pharyngeal muscle positioned in the worm's throat.

The current study builds on Kitaguchi and his colleagues' work on many kinds of biosensors, which they have colorfully named after birds and mythical beasts.

"For sensors of second messengers, we decided to name after birds: Flamindo3 and cGull4. And for sensors of metabolism, we named after chimera: MaLion5 and Glifon6," explains Kitaguchi.

He says that all of the knowledge gained so far has been invaluable for optimizing the structure of Glifons. "For example, we realized that linker length within the protein structure is important when we developed Flamindo," he says. "Later, we found that the amino acid sequence in the linker is crucial when we developed cGull and MaLions."

Looking ahead, Glifons could help advance understanding of several chronic and lifestyle-related diseases including diabetes and obesity, as they are related to glucose imbalance. Many research groups are now investigating how artificial sweeteners, for example, might disturb glucose metabolism. Much remains to be explored, as the health effect of artificial sweeteners is a subject of ongoing debate, says Kitaguchi.

Half maximal effective concentrations. Here, they refer to the concentration of glucose that induces a response halfway between zero and maximum.

One of the most commonly used human cell lines in biomedical research. The line was derived from cervical cancer cells taken from Henrietta Lacks, a patient who died of cancer in 1951.

Fluorescent cAMP indicator. The target of this indicator is cyclic adenosine monophosphate (cAMP), a second messenger involved in many biological processes.

Monitoring ATP level intensity-based turn-on indicators. The target of MaLion is adenosine triphosphate (ATP), a key molecule that carries energy within cells. The indicator is named after Merlion, a mythical beast with a lion's head and the body of a fish that is the official mascot of Singapore.

Green Glucose indicating fluorescent protein. These indicators are named after griffin, a mythical beast that is part lion and part eagle.