Researchers at Tokyo Tech have revealed that an artificial receptor preferentially binds male steroid hormones from a mixture of male and female hormones in water. Based on their findings, they succeeded in the preparation of a prototype detection system for male hormones at the nanogram level. This achievement could lead to the development of ultrasensitive analytical devices for medical diagnostics and anti-doping testing in sports. 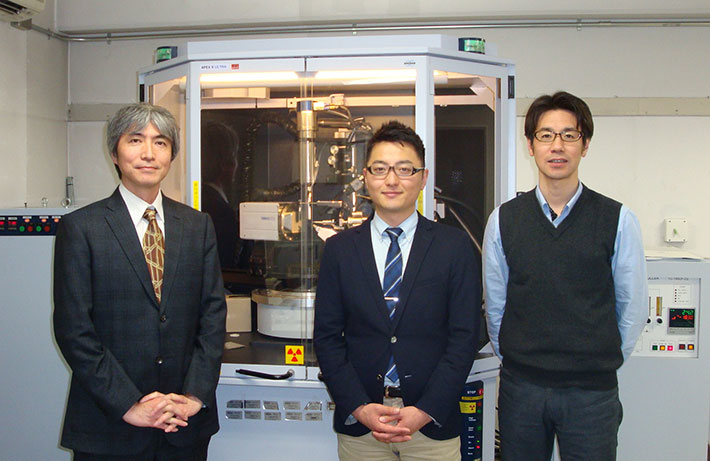 Chemists at Tokyo Tech's Laboratory for Chemistry and Life Science have designed and developed a capsule-shaped synthetic receptor that can distinguish between male and female steroid hormones. Namely, the receptor displays unusual high binding affinity toward androgenic1 male hormones in water.

Published today in Science Advances, their achievement is a prime example of biomimetic design2 — the creation of systems that mimic ideas from nature. "Natural biological receptors can recognize tiny structural differences between male and female steroid hormones using their protein pockets," the authors say. "However, it has been challenging to emulate this function artificially until now."

The key to their breakthrough was the unique design of the cavity (mimicking the natural pocket but using unnatural components) within the receptor. This cavity, encircled by polyaromatic frameworks3 held together with metal ions, enabled the receptor to act as a semi-rigid container — one flexible enough to complement the shape of the hormone and to induce effective bonding interactions.

The study, conducted by Michito Yoshizawa, Masahiro Yamashina and co-workers, is a continuation of the team's previous work on developing innovative nanocapsules for a wide range of biosensing applications in the medical and environmental fields. 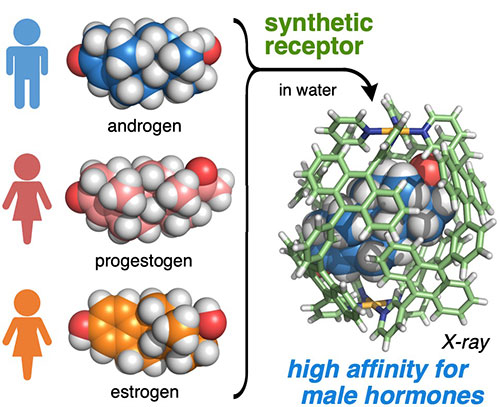 A schematic representation of the selective binding of testosterone from a mixture of testosterone, progesterone, and beta-estradiol in water. The receptor has an inner cavity with a diameter of approximately one nanometer.

Using X-ray crystallographic analysis, the researchers observed that the spherical cavity is distorted into an elliptical shape upon encapsulation of testosterone. They say that this conformational change contributes to the enhancement of intermolecular interactions between the receptor and the hormone.

Going one step further, the team devised a way of using the receptor to detect extremely small amounts of a male hormone. They prepared a receptor-dye complex that emits bluish green fluorescence without testosterone. By adding a nanogram amount of testosterone, the fluorescence decreased considerably upon the encapsulation, representing a remarkable new ultrasensitive detection method. "We envision that our synthetic receptor will be used for the development of practical, ultrasensitive analytical devices for steroid sex hormones, ranging from medical tools to doping controls in sports, in the near future," the researchers say.

Describing a group of steroid sex hormones predominantly involved in regulating the development of the male reproductive system.

A research field that takes inspiration from biological or natural systems (such as structures and functions) for the development of novel materials and devices.