Photonics: The curious case of the disappearing cylinders

A pair of researchers at Tokyo Institute of Technology describes a way of making a submicron-sized cylinder disappear without using any specialized coating. Their findings could enable invisibility of natural materials at optical frequency1 and eventually lead to a simpler way of enhancing optoelectronic devices, including sensing and communication technologies. 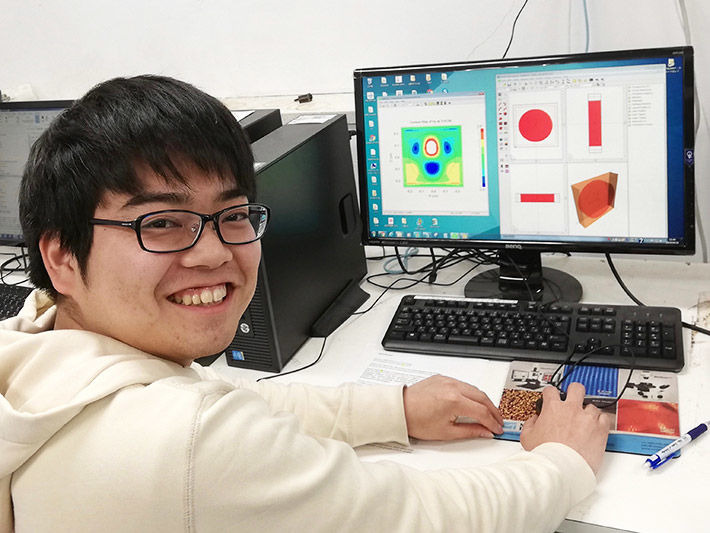 Yusuke Kobayashi, first author, is a graduate student in the Department of Electrical and Electrical Engineering, School of Engineering at Tokyo Tech.

Making objects invisible is no longer the stuff of fantasy but a fast-evolving science. 'Invisibility cloaks' using metamaterials2 — engineered materials that can bend rays of light around an object to make it undetectable — now exist, and are beginning to be used to improve the performance of satellite antennas and sensors. Many of the proposed metamaterials, however, only work at limited wavelength ranges such as microwave frequencies.

Now, Kotaro Kajikawa and Yusuke Kobayashi of Tokyo Institute of Technology's Department of Electrical and Electronic Engineering report a way of making a cylinder invisible without a cloak for monochromatic illumination at optical frequency — a broader range of wavelengths including those visible to the human eye.

They firstly explored what happens when a light wave hits an imaginary cylinder with an infinite length. Based on a classical electromagnetic theory called Mie scattering3, they visualized the relationship between the light-scattering efficiency of the cylinder and the refractive index4. They looked for a region indicating very low scattering efficiency, which they knew would correspond to the cylinder's invisibility.

After identifying a suitable region, they determined that invisibility would occur when the refractive index of the cylinder ranges from 2.7 to 3.8. Some useful natural materials fall within this range, such as silicon (Si), aluminum arsenide (AlAs) and germanium arsenide (GaAs), which are commonly used in semiconductor technology.

Thus, in contrast to the difficult and costly fabrication procedures often associated with exotic metamaterial coatings, the new approach could provide a much simpler way to achieve invisibility.

The researchers used numerical modeling based on the Finite-Difference Time-Domain (FDTD) method to confirm the conditions for achieving invisibility. (See Figure 1 / Animation 1.) By taking a close look at the magnetic field profiles, they inferred that "the invisibility stems from the cancellation of the dipoles generated in the cylinder."

(a) Light with a wavelength of 700 nm traveling from bottom to top is distorted when the radius of the cylinder (in the middle) is 175 nm. (b) There is hardly any distortion when the cylinder has a radius of 195 nm. These images correspond to the conditions for invisibility predicted by the theoretical calculation.

Although rigorous calculations of the scattering efficiency have so far only been possible for cylinders and spheres, Kajikawa notes there are plans to test other structures, but these would require much more computing power.

To verify the current findings in practice, it should be relatively easy to perform experiments using tiny cylinders made of silicon and germanium arsenide. Kajikawa says: "We hope to collaborate with research groups who are now focusing on such nanostructures. Then, the next step would be to design novel optical devices."

Potential optoelectronic applications may include new kinds of detectors and sensors for the medical and aerospace industries.

A region of the electromagnetic spectrum that includes ultraviolet, visible and infrared light.

Specially engineered materials designed to have advantageous electromagnetic properties. Many recent advances in optical cloaking are based on John Pendry's

A measure of how fast light propagates through a material.