Thirty-nine students, faculty, and members of the public gathered at Ookayama Campus on January 17 to learn about and discuss religion through the "Immigration and Religious Pluralism: Co-existing Peacefully" symposium. This was the 13th symposium of its kind, organized mainly by students taking part in the Student Skills Discovery and Development Project.

Japan revised its Immigration Control Law in December 2018, and the country expects to see an increasing number of foreign nationals entering the country in the near future. Against this backdrop, Tokyo Tech students and faculty saw a timely opportunity to discuss how this potential influx of diversity would affect society in Japan.

Professor Tatsuya Yumiyama from the Institute for Liberal Arts and Taisho University Lecturer So Hoshino joined the symposium as panelists. 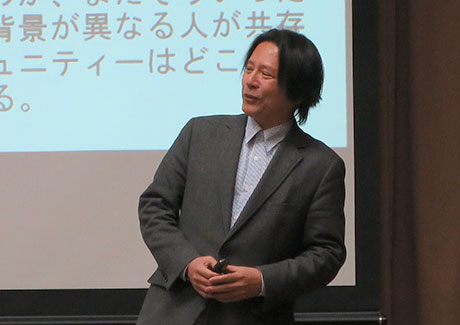 To get the ball rolling, Yumiyama asked what kinds of lives foreign nationals live in Japan, and how religion relates to these lives. Hoshino, who is a Buddhist priest, responded with a short lecture on one of the bigger immigrant communities in Japan. "Many Brazilians come to Japan, and as a result of the cultural differences they experience, their feelings of Brazilian identity strengthen. Religious activities may be a way to resist deprivation of identity, or a way to express the emergence of a new one. He continued, "It is often said that the Japanese are not religious, and the changes that are coming mean that we should strive to improve our religious literacy so we can better co-exist with other cultures."

After the talks by the faculty members, other participants joined in to discuss religion from a variety of different angles. 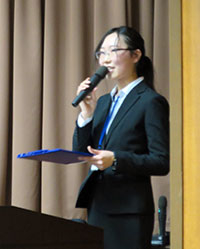 The topic of this symposium was religion. When I was a 1st-year student, I selected Religion as one of my Humanities and Social Science Courses. My aim was to not only understand different beliefs, but also to learn about other people through religion, and as a result learn more about myself. Today, I continue to develop myself by learning and gaining awareness of different cultures, regardless of religion.

What is the Student Skills Discovery and Development Project?

The Student Skills Discovery and Development Project, a Tokyo Tech-led initiative, aims to foster creativity and international leadership among bachelor-level students. Currently, the project focuses on touring domestic conferences, and arranging special lectures and symposiums, the latter of which are mainly organized and facilitated by students. In addition to creativity and leadership skills, the project aims to boost students' planning, negotiation, and communication abilities.

In AY 2018, participating students hosted one special lecture, one symposium, and joined conferences involving the Botanical Society of Japan, the Japanese Biochemical Society, and the Japan Brain Science Society.

The first event of the Student Skills Discovery and Development Project for AY2019 will be a special lecture on cognitive neuroscience, which is planned for June 26.