Scientists at the Tokyo Medical University and the Tokyo Institute of Technology identified the molecule involved in thalidomide-related dysfunctions associated with in utero brain and organ development. Their in vivo results using a zebrafish model of mammalian development showed that thalidomide binds to a protein named cereblon, a subunit of an enzyme complex responsible for the creation of neurons, thereby inhibiting normal brain development. Their results suggest this protein as a possible therapeutic target for regulating abnormal brain development. 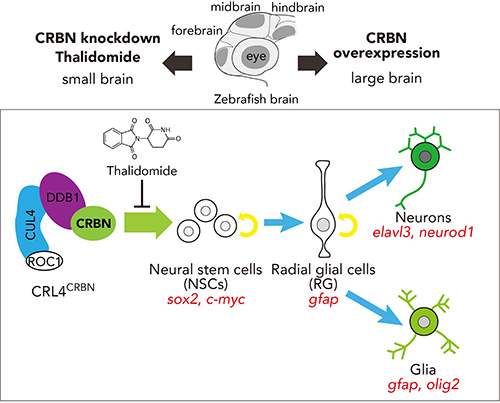 In the late 1950s, thalidomide was prescribed as a treatment for afflictions ranging from anxiety to morning sickness. In the early 1960s, research indicated that the drug was the primary cause of numerous in utero birth defects, ranging from limb malformation to deafness and/or blindness.

Handa's group (Tokyo Medical University) identified that thalidomide selectively binds to a protein called cereblon (CRBN), dysfunction of which reportedly results in mental retardation and epilepsy in humans. To determine the mechanisms involved in CRBN dysfunction and its downstream effects, Handa, Yamaguchi (Tokyo Tech), and their teams studied its role in a common vertebrate animal model (zebrafish), finding that the CRBN gene encodes a protein involved in the survival and differentiation of neural stem cells (NSCs). During the embryonic stage, NSCs transform into neurons and glial cells, which are directly involved in brain development.

Their findings showed that decreased levels of available CRBN protein resulted in smaller brains in zebrafish embryos, whereas increasing its availability resulted in larger brains (Figure 1). Importantly, parallel experiments in zebrafish embryos with normal levels of CRBN revealed that treatment with thalidomide showed results similar to those observed in embryos with depleted levels of CRBN. Handa commented that these findings "suggest that CRBN selectively binds thalidomide, which alters the CRBN functions involved in promoting normal embryonic development".

Specifically, CRBN is a member of a group of molecules responsible for allowing the creation of neurons and glial cells, the latter of which are responsible for neuron proliferation and protection, from NSCs during the early stages of brain development. The authors describe a process by which inhibition of CRBN function results in the premature death of these NSCs, thereby preventing the creation of cells required for normal brain and organ development.

Importantly, the authors' findings suggest a role for the CRBN gene in regulating brain size. "This suggests potential opportunities to develop therapeutic strategies for afflictions associated with macrocephaly related to excessive brain size, such as autism spectrum disorder," said Yamaguchi. Thalidomide derivatives can be developed to control unchecked proliferation of NSCs in order to address such afflictions.