The Laboratory for Design of Social Innovation in Global Networks (DLab) held a gathering on May 18, bringing together approximately 30 staff, students, alumni, and members of the public at the Future Scenarios Workshop. 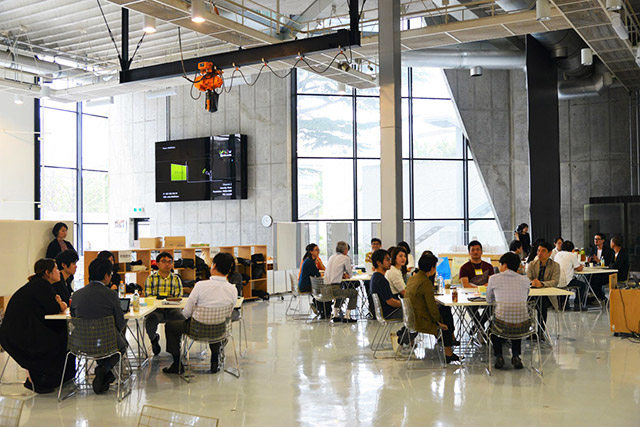 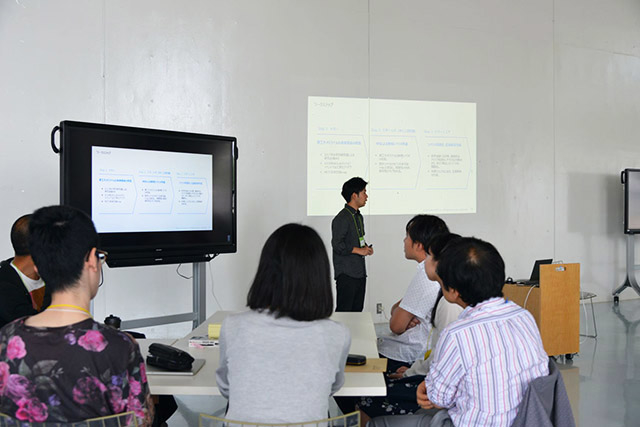 Since its establishment in September 2018, DLab has aimed to unite Tokyo Tech members with citizens to discuss openly the kind of future they want to design. In the May workshop, the objective was to work towards the creation of a "Tokyo Tech future chronology."

As in past workshops, participants tried to avoid simply extending linear thinking to predict an already foreseeable future, and instead sought the intersection between "the future we want" and the possibilities of science and technology. To gain insights into possible future scenarios, the group looked to develop a strategy that would help them backcast their way from a point in the future back to the present. 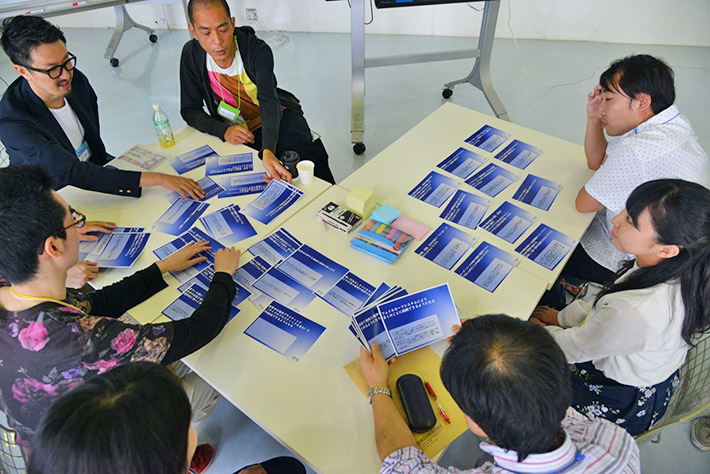 Team viewing and discussing "elements of the future" cards

After some icebreaking activities, participants formed groups to discuss ideas produced by DLab members and researchers at previous workshops. Cards containing these "elements of the future" were sent to participants beforehand, and contained a desired future achievement such as "having the ability to decide precisely what one remembers and to remove unwanted memories." Workshop participants reviewed and discussed the meaning and potential of roughly 60 of these elements, jotted down related ideas on post-its, and grouped these with each element. 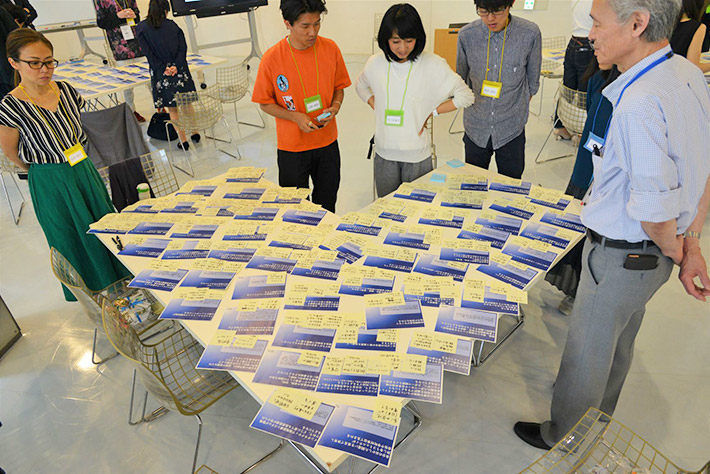 To follow up, participants used the KJ method — a process to identify effectively a key problem, organize information, and create new ideas — to explore the expectations of participants united by common elements, identify signs of social change, and create hypotheses of the future. One goal that emerged was: 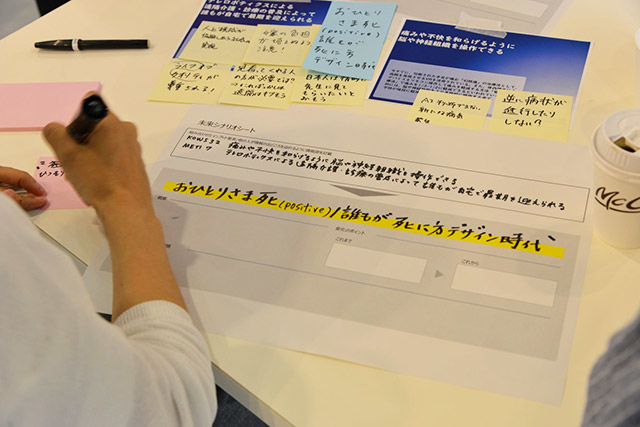 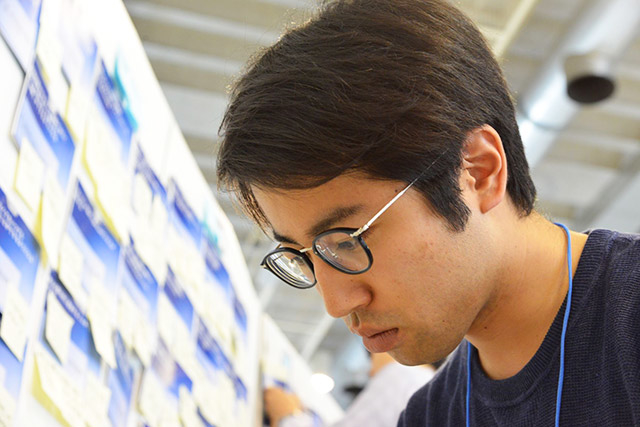 Another team concluded that we can "choose the life we live without being confined by the real or virtual worlds." By specifying which elements their hypotheses derived from, teams were also able to pinpoint actions required, specific changes, and potential issues to be addressed in relation to their hypothesis.

Scenario: Choosing the life we live without being confined by the real or virtual worlds

Action required: Realize technology that eliminates the boundary between the real and the virtual

Change: For women, giving birth at a special place filled with memories rather than a hospital

Issue: Need to identify risks that potential emerge when the real-virtual boundary is eliminated. 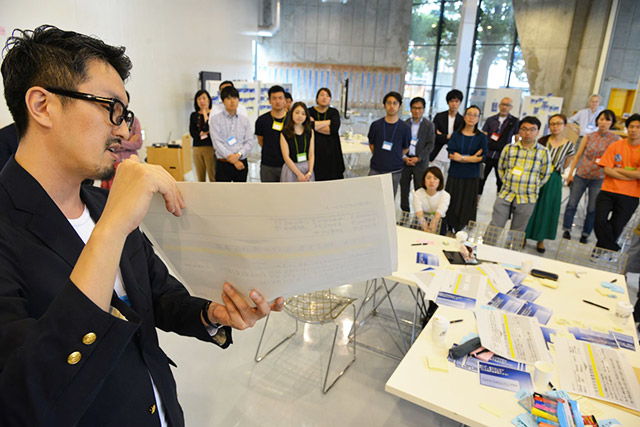 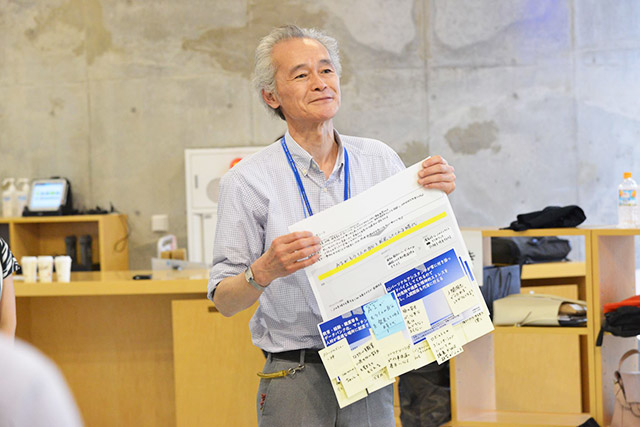 To complete the event, teams shared and discussed how their ideas were interrelated. Each group presented their scenario and predicted a timeline for when it might be realized. As a result, participants forecasted the emergence of a society capable of solving global-scale problems by 2040, the ability to select freely between the real and virtual world by 2050, and a truly equal society by 2100. Key phrases that emerged during discussions included health, education, and the recycling of resources, suggesting that these aspects are important links that will shape the Tokyo Tech Future Chronology.

Considering the correlation between created scenarios

Feedback from participants after the event was again positive. Many expressed satisfaction regarding the fresh approaches and unique ideas that emerged during the session. The DLab process continues at the next workshop scheduled for June 16, when participants will refine, integrate, and create new scenarios in order to progress towards a better future. 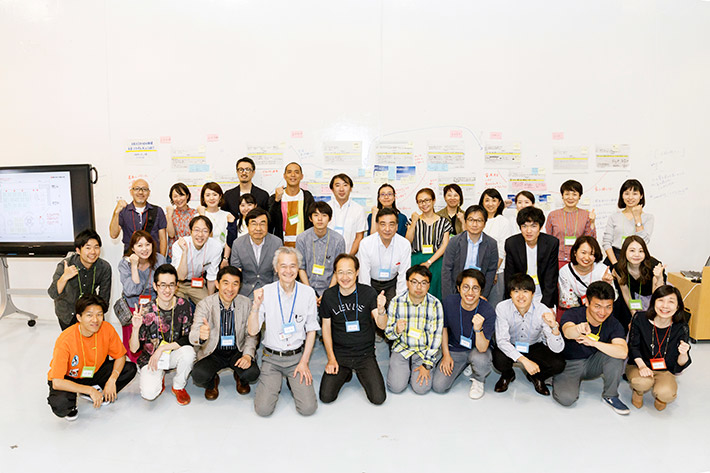 *
This article was updated on July 26