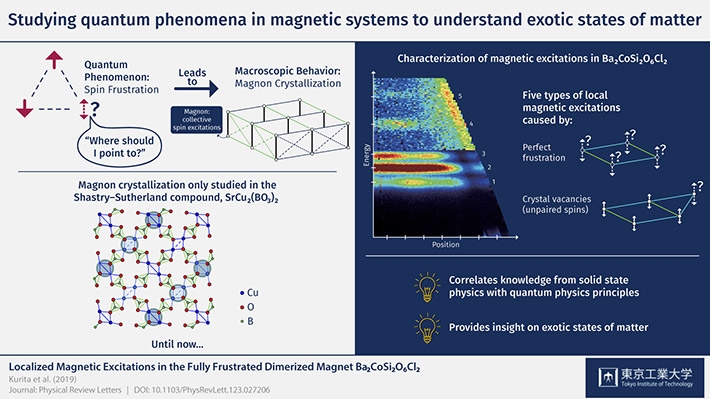 Apart from the states of matter that we are all aware of and accustomed to, which correspond to solids, liquids, and gases, more exotic states can be generated in specific materials under special conditions. Such states are of great interest to physicists because they help them gain a deeper understanding of quantum phenomena, which is key for scientists and engineers to innovate state-of-the-art technology.

Bose–Einstein condensate is one such state of matter that occurs at very low temperatures. In this state, most of the constituent particles of the condensate are in the so-called "ground state", which is the state with the lowest energy, and microscopic quantum phenomena can be easily observed. Interestingly, this state can also be exhibited by quasiparticles, which are not actual particles but represent collective microscopic excitations in a system and can be thus used to describe the system in a simplified, yet very useful manner. Magnons, a type of quasiparticle that manifests in magnetic materials, are collective excitations originating from electrons in a crystal. Magnons can normally hop between different locations in the crystal; however, in some compounds and under the effect of a magnetic field, they can be trapped in a kind of catch-22 situation, which results in them exhibiting rigid crystallinity. This is a very interesting quantum phenomenon called "magnon crystallization", where the magnons are said to be in a ‘frustrated' state.

To explore this peculiar effect, a team of scientists led by Prof. Hidekazu Tanaka from Tokyo Tech, worked on characterizing the magnetic excitations occurring in a magnetic insulator bearing the chemical formula Ba2CoSi2O6Cl2. They performed neutron scattering experiments, in which neutron beams were fired onto Ba2CoSi2O6Cl2 crystals at different energies and angles to determine the properties of the crystals. Based on the results of these experiments, the team demonstrated that magnon crystallization occurs in Ba2CoSi2O6Cl2 and attributed the origin of this ordered state to the fundamental electronic interactions in the material, from a quantum-mechanical perspective. "Until recently, experimental studies on magnon crystallization have been limited to the Shastry–Sutherland compound, SrCu2(BO3)2, and this study is an attempt to investigate this fascinating quantum phenomenon in a different material," remarks Prof. Tanaka.

Understanding the ordering of magnons and their effects on the micro- and macroscopic magnetic properties of crystals could provide researchers valuable insight to correlate condensed matter physics with the principles of quantum mechanics. "This work shows that highly frustrated quantum magnets provide playgrounds for interacting quantum particles," concludes Prof. Tanaka. As recommended by the scientists, additional studies will be needed to further understand the Ba2CoSi2O6Cl2 system and gain a deeper foothold into quantum mechanics and its potential applications.