Tokyo Tech's Summer Challenge, a unique three-day-two-night camp for high school students, provides youngsters the chance to participate in university-level education while engaging with some of the world's top researchers. The event was held for the sixteenth straight year in the summer of 2019.

After an unusually long rainy season, 53 third-year students from three high schools gathered in Ranzan Town, Saitama Prefecture from August 1 to 3 to exercise their creativity and teamwork skills, and motivate each other to discover new fields of interest. In addition to working on various scientific and technological challenges under the guidance of university faculty, the participants dined and spent evenings together, developing new friendships with their counterparts.

Challenges 1: The rays in Reiwa

Department of Industrial Engineering and Economics, School of Engineering

Summer Challenge 2019 kicked off with Column Land, a popular Tokyo Tech class and effective icebreaker where students evaluate short anonymous pieces of writing prepared in advance by all participants. This year's guiding topic was Reiwa — the name of the new era in Japan — or more specifically rei, the first two syllables in this name. As always, the written pieces created based on this theme exhibited both creativity and humor. The session concluded with quick self-introductions and teams reading out each other's creations.

The style is the man himself, according to the proverb. By critiquing each other's writing and appreciating different styles and personalities, students quickly acquainted themselves with others and began building teams for the challenges to come.

"Among many of the scientific challenges, the first one was liberal arts-focused, and the exchange of opinions was very interesting. I could feel the academic aura surrounding the event."

Department of Mathematical and Computing Science, School of Computing 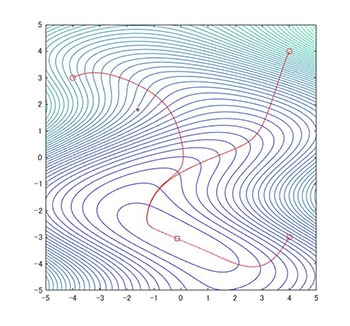 This was the first time for many students to come across the gradient descent concept, but many were soon pulled in as they learned about its link to machine learning. This challenge was designed so that students could experience advanced content in three simple steps.

First, after grasping the principle using intuition, students traced a route down a mountain which was perpendicular to the contour lines on their map. Next, students learned how to express this route using a mathematical expression and calculation. And finally, students attempted to apply gradient descent to artificial intelligence. By running a simulation and allowing the computer to perform complex calculations, students were able to observe how the "learning error" and "test error" change, and were asked to discuss how they could minimize the latter.

"Gradient descent is a concept rarely covered in high school. The contours and the water flow routes, the calculation methods, the principle of data calculation in AI were all cutting-edge and very stimulating."

This challenge began on the first evening and continued on the second day. In the past, students had disassembled fairly large items, including coffeemakers and measuring wheels, but this time the items fit in one hand — toy cars and mechanical pencils.

Students were surprised to learn how each part played its own role in such small items. Participants elucidated the mechanism of the spring and gear in their toy car, and examined how the car's initial speed is applied, how far it will run, and how it performed on a slope. Students also scrutinized and tested their mechanical pencils carefully, with many showing interest in the relationship between the strength of shaking the pencil and the way in which the lead advances from its tip.

On the following day, groups gave five-minute presentations on their findings. 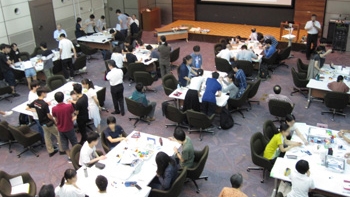 "All of the items were things that participants were familiar with or had seen at least once, but the students' ability to observe was still thoroughly tested."

Department of Earth and Planetary Sciences, School of Science 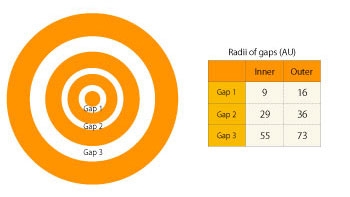 After a short excursion outdoors, it was time to jump into the world of space and planets with Challenge 5.

Even within our solar system, planets vary greatly. We have rocky planets like Earth, gassy planets like Jupiter, and massive icy planets like Neptune. Other stellar planetary systems are even more diverse.

Still, each of these unique planets seem to follow a common process before they are born, with dust playing a key role. This cosmic dust, often less than 1 µm in size, wraps around a star and forms a disk. This dust coalesces further to create a larger mass, which in turn creates a planet. When a newly formed planet is in orbit, it opens a gap in the disk. Therefore, if a gap is observed around a star, a newly born planet may very well be orbiting it.

HL Tauri has around it a dusty disk with three prominent gaps. Students were asked to calculate a theoretical value for the thickness of this disk so that these gaps could be seen not only from directly above, but also from a 45-degree angle. A challenge of truly infinite scale that combined observation and theoretical calculation.

"Observing the HL Tauri star and its disk structure — its structure as seen from above, from the side, and from a 45-degree angle — was very interesting." 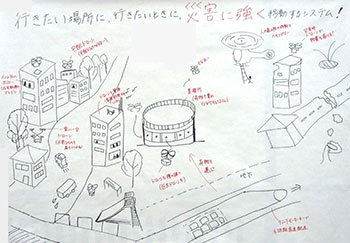 Transportations systems have come a long way with human endeavors, but the need to secure energy for these systems and the issue of global warming caused by fossil fuel-generated carbon dioxide emissions have been on a head-on collision course for some time. Additionally, safety is of utmost importance, particularly for aging societies.

After listening to a short lecture, students groups were asked to design their dream transportation system. They were encouraged to set goals for new systems first. What should they focus on? Safety? Efficiency? Energy saving?

Some teams focused on freedom and envision individual vehicles, while others combined units to design highly efficient systems. When it was time to design plans on paper, the female students in many groups took on leadership roles.

"Transportation systems connect societies in many ways, and this challenge asked groups to define such systems in the near future. It was an interesting activity that required use of past knowledge, knowledge acquired during the lecture, and creativity."

Challenges 7: Examining the line between life and death

Center for Biological Resources and Informatics 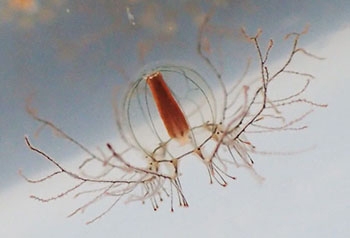 Being alive...what does it mean? Jellyfish can provides clues to answering this very big question. Cladonema pacificum jellyfish, for example, can reproduce using both asexual and sexual reproductive systems. After some knowledge sharing on these unique organisms, students moved on to discuss bacteria, hibernating mice, ancient lotus seeds, and other seemingly "lifeless" plants and animals, and debated standards and methods to determine whether these species were "dead or alive."

Many suggestions emerged — observation with a microscope, stimulation with electricity or chemicals, or simply waiting to see if species decayed. In this last challenge, students seemed to split into two camps — those who wanted to apply direct stimulus despite the risks involved, and those who preferred a more non-invasive approach.

"It was fascinating to see how students perceived life and death."