Histone modifications are the influencers of zygotic genome awakening

Scientists at Tokyo Institute of Technology (Tokyo Tech) observed changes to the gene-regulating factors during zebrafish development and discovered that modifications to "histone H3", one of the proteins around which DNA is bound, play an important role in "zygotic genome activation" or transition of control of zebrafish embryonic development from maternal material to the zygote (Figure 1).

The zebrafish is an important model organism in biology. We share 70% of our genes with these tiny tropical fish, and more than 80% of human genes associated with disease are known to have a zebrafish counterpart. Additionally, their entire genome sequence has been identified, and it is more efficient to grow fish than mice.

Their development, however, is a little different from that of mammals. Although fish reproduce sexually, like all vertebrates, fertilization of the egg is external, as both the egg and sperm are released into the water. Despite this important difference, the majority of sequences involved in protein synthesis associated with, and the regulation of, embryonic development is conserved across species.

This means that some of the basic building blocks that give cells the instructions of how to build a living organism are conserved across species. Instead of getting rid of these sequences, evolution regulates their expression through modifications of genomic DNA and histone proteins, around which DNA is bound. These "epigenetic factors", as scientists call them, determine whether genes become functional or not because they alter the chemical and/or structural composition of DNA. This regulation of what gets to become what is particularly important when an organism develops.

This is why a group of scientists from Tokyo Tech, led by Professor Hiroshi Kimura, set out to study epigenetic changes during zebrafish development. According to Professor Kimura, "the structural conservation of histones and crucial enzymes for transcription (i.e., RNA polymerases II), as well as the fact that zebrafish embryos are transparent, makes them a perfect model to study the role of these modifications in the development of living organisms."

Using fab-based live endogenous modification labeling, or "FabLEM", a technique to visualize the dynamics of posttranslational modifications using specific antibodies in live cells (Figure 2), the team observed active RNA polymerase II during "zygotic genome activation" (ZGA), or the process during which the development of the embryo comes under control of the zygote or the developing embryo itself, instead of the maternally deposited material. Although the timing of this transition is species-specific, it also occurs in mammals.

Then, the team compared the changes in histone modification with the timing of genome activation. One of the main findings of their studies was that acetylation that occur on the 27th Lysine in histone H3, or H3K27, becomes concentrated prior to active transcription (Figure 3). Visualizing transcripts of the earliest activated gene miR-430 together with H3K27 acetylation confirmed the findings, and transcription inhibitor did not prevent the accumulation of H3K27 acetylation. What the results suggest is that H3K27 acetylation is an epigenetic factor that awakes the genome for transcription.

Because RNA polymerase II is present in all species, the method can also be applied to study the development in other living organisms. "This opens the possibility of further research on the link between transcription regulation and nuclear organization", remarks Professor Kimura.

Fab-based imaging to monitor the dynamics of active transcription and histone modifications during ZGA in living zebrafish embryos revealed spatiotemporal coordination within single nuclei, where H3K27 acetylation was concentrated at distinct foci on the miR-430 gene cluster prior to its transcription. These observations, together with inhibitor assays, suggest that H3K27ac precedes active transcription during ZGA. 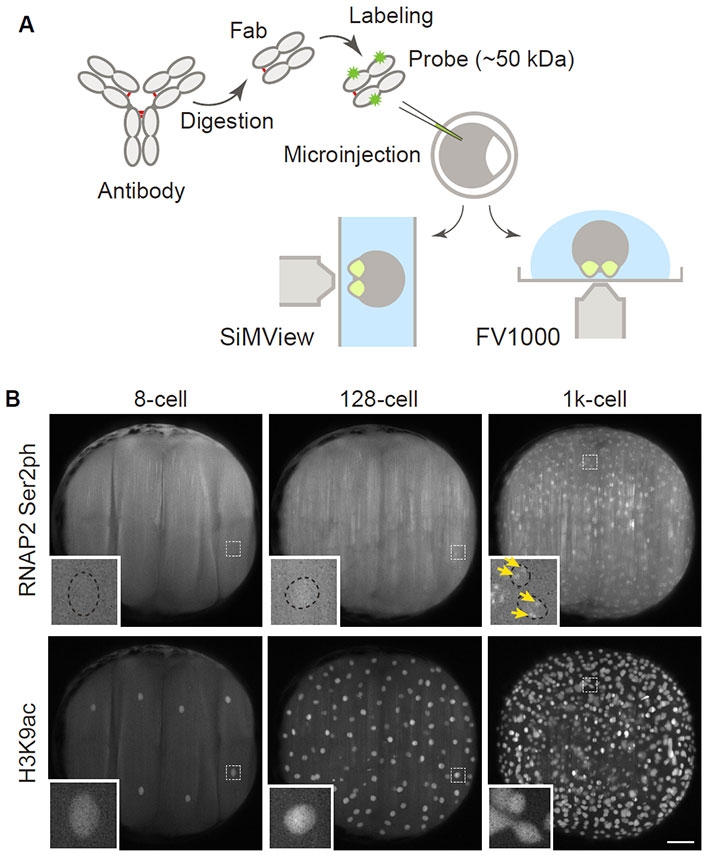 (A) Scheme of experiments. Fluorescently labeled Fabs prepared from modification-specific antibodies are injected into 1-cell-stage zebrafish embryos, which are then mounted for a lightsheet (SiMView) or a confocal (FV1000) microscope. (B) Representative images taken with a SiMView microscope. Fabs specific to active, phosphorylated RNA polymerase II (RNAP2 Ser2ph) and histone H3 acetylated at the 9th lysine (H3K9ac) were simultaneously injected and imaged. RNAP2 Ser2ph Fabs were clearly concentrated in nuclei around the 1k-cell stage, whereas H3K9ac Fabs were enriched in nuclei from the 8-cell stage. Scale bar: 100 μm. 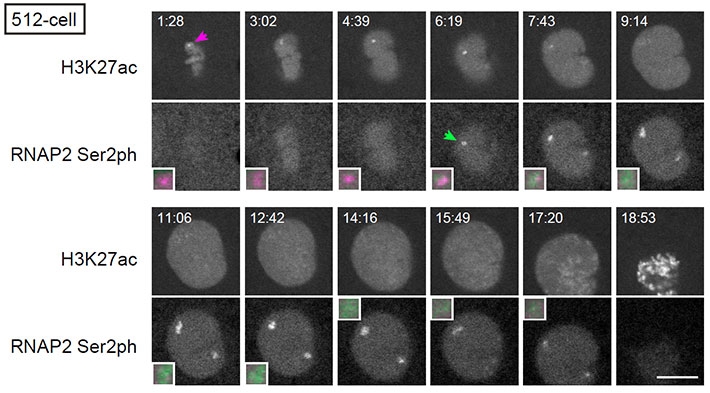