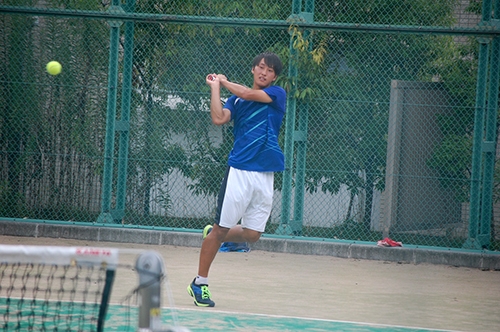 Sumiya also finished second in the doubles category with pair Hiroki Kojima, a 4th-year Information and Communications Engineering student. Sumiya and Kojima, seeded sixth at the start of the tournament, knocked out several top-seeded pairs before being stopped in the finals.

The Kanto Polytechnic University Hardball Tennis Federation competition, held this year from August 17 to September 6, brings together approximately 1,000 men and 300 women from universities around the Kanto region. This year, 18 male and 8 female players participated from Tokyo Tech.

I am extremely happy to have won the singles and finished second in the doubles category of this competition. Last year, I finished third in the singles and reached the best eight in the doubles, so I really feel that I have developed as a player in the past twelve months. I would like to thank all my practice partners, and the alumni, coaches, and families who support the club.

In the Department of Physics, challenging lectures and assignments keep me busy, and I sense that this will continue in the future. Still, I want continue practicing my tennis every day. My goal is to win both the singles and doubles crowns next year.