The Tokyo Tech Tennis Team has been promoted to Division 2 of the Kanto Polytechnic University Hardball Tennis Federation league after finishing in first place in Division 3. During a busy match schedule throughout October, the Institute's players beat Kanagawa Institute of Technology 8-1 and defeated Kitasato University 7-2. They then overran Tokyo City University 9-0 to earn promotion. 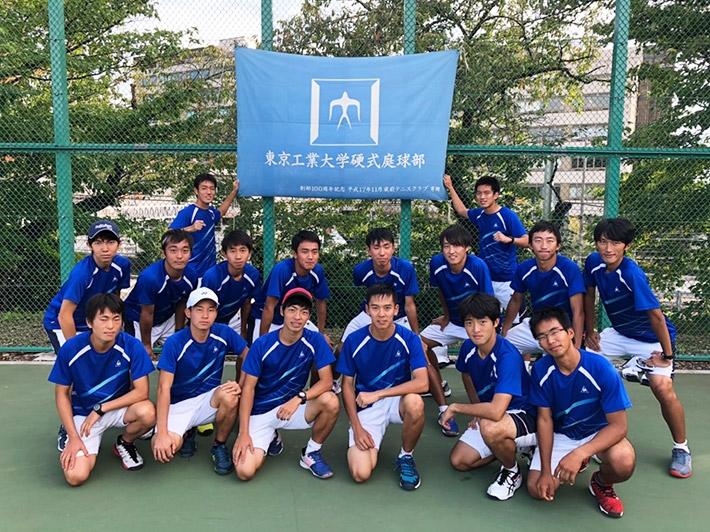 A total of 51 higher education institutes compete in the 13 divisions of the Kanto Polytechnic University Hardball Tennis Federation league. Divisions hold annual tournaments each of which include three doubles matches and six singles matches. The winner of each tournament is determined based on the number of match victories, while the winner of the division is the team with the most tournament wins.

This year, Tokyo Tech already secured victory in Division 3 after the second tournament, and completed their move to Division 2 with a win over Tokyo City University.

This was our first official tournament after the 4th-year students left us last month to focus on their studies and research, and we are very pleased with the result. The whole team would like to thank the alumni and guardians of the students who support us on a daily basis.

Last year, we were not able to gain promotion to Division 2, which was a tough pill to swallow. Achieving it this year has united the team further and encouraged us to continue studying and practicing harder.

The Tokyo Tech Tennis Team, affiliated with the Kanto Inter-Collegiate Tennis Federation and Kanto Polytechnic University Hardball Tennis Federation, has a 100-year history. The men currently play in Division 6 of the Kanto Universities Tennis League. They were recently promoted to Division 2 of the polytechnic universities league. Tokyo Tech's women play in Division 5 of the former and Division 4 of the latter. In addition to normal practices, the Tokyo Tech Tennis Team holds trial sessions with interested high school students.