Researchers from USA and Japan have cultivated lifelike chemical reactions while pioneering a new strategy for studying the origin of life.

Figure 1.
The researchers subjected their chemical soups to a form of selection by taking a small amount of material from one vial and placing it in a new vial with fresh pyrite and chemicals. After multiple generations, they found evidence of chemical networks, represented in yellow, spreading quick enough to avoid dilution.
Credit: David Baum Lab

The work is far from jumpstarting life in the lab. Yet, it shows that simple laboratory techniques can spur the kinds of reactions that are likely necessary to explain how life got started on Earth some four billion years ago.

The researchers subjected a rich soup of organic chemicals to repeated selection by constantly paring down the chemical population and letting it build back up again with the addition of new resources. Over generations of selection, the system appeared to consume its raw materials, evidence that selection may have induced the spread of chemical networks capable of propagating themselves.

On longer timescales, these chemical changes oscillated in a repeating pattern. This boom-and-bust cycle isn't yet fully explained, but it is good evidence that the chemical soups established feedback loops resembling those found in living organisms.

David Baum, a UW–Madison professor of botany, and his team published their findings

Oct. 23, 2019, in the journal Life. The work was funded by the National Science Foundation and NASA.

Now, other researchers can use this experimental approach and help untangle what components are necessary to encourage lifelike chemical systems and whether those chemical networks can go on to evolve more complex traits.

If this system can generate greater complexity, it might help solve the puzzle of how simple chemicals eventually gave rise to something as intricate as the cellular ancestor that spawned all life today.

"A core question in the origin of life is: How do you get evolution before there was genetic information like that within DNA or RNA?" says Baum. "What we've now realized is that the evolution of chemical networks may solve that problem, and that's something we can tackle in the lab."

To test the idea of chemical ecosystem evolution, the researchers assembled a rich soup of chemicals. In seawater, they dissolved amino acids, sugars, common organic compounds, trace minerals and the building blocks of nucleic acids. To give the system even more of an edge, the scientists spiked the rich seawater with ATP, a high-energy molecule that drives nearly all of life's reactions today but was unlikely to exist in primordial times.

"Not all of these chemicals might have been available on early Earth, but we're trying to accelerate a process that could in theory get started from even simpler building blocks," says Baum, who is also a discovery fellow at the Wisconsin Institute for Discovery

The team mixed their primordial soup with fine grains of pyrite, a mineral of iron and sulfur also known as fool's gold. Building on German chemist Günter Wächtershäuser's 1988 proposal of chemical evolution

, Baum's team believes that pyrite is an ideal material for cultivating lifelike chemistry.

"Pyrite was a common mineral on primordial Earth, it can bind to a lot of organic compounds, and it can catalyze reactions between them," says Lena Vincent, a graduate student in Baum's lab and the lead author of the study. "And, very elegantly, a lot of highly conserved enzymes across life have cores that are very similar to pyrite. They're basically pyrite wrapped in protein."

The researchers added a few drops of the enriched seawater soup to a small amount of crushed pyrite in a vial and mixed the solution for a few days. This was the first generation. To begin the next generation, Vincent took a small amount of the first solution and mixed it into a vial with fresh soup and pyrite. Over a dozen or more generations, only those chemical networks that could propagate faster than they were diluted would survive and spread.

After 12 or 18 generations, the researchers saw a drop in available phosphate — a readout of ATP use — and in the dissolved organic material, which suggested that chemical compounds might be sticking to and spreading along the pyrite grains.

When they inspected the pyrite under ultra-high magnification, the researchers saw an abundance of fractal shapes spreading along the surface of the mineral in the experimental samples but not in control samples that lacked a history of selection.

While these fractal shapes appear to be salts and are not likely to be lifelike themselves, the researchers suspect they may be induced by a thin smear of organic compounds bound to the grains. The fractals never appeared when organic material was left out of the solution. 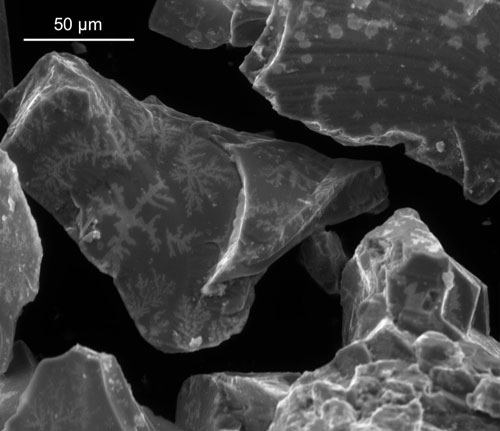 Fractals:
Under ultra-high magnification, the researchers found distinctive fractal shapes spreading along pyrite grains after their chemical soups went through multiple generations. The researchers believe these fractals are salty deposits induced to form by a thin layer of organic material spread along the mineral.
Credit: David Baum Lab

"Scientists have been looking for examples of reactions that spontaneously complexify and organize organic chemicals for a long time," says Jim Cleaves, a co-author on the work from the Earth-Life Science Institute (ELSI) at the Tokyo Institute of Technology in Japan. "Based on this work, and other experiments we have been conducting at ELSI, it seems possible such reactions may not be incredibly rare at all, it may simply be a matter of using the right tools to find them."

When the researchers ran the experiment out to 40 generations, they observed periods of gradual change interspersed by sudden reversals to the starting conditions. While the cause of these crashes remains unknown, this kind of non-linear feedback loop is found across life and is evidence that the experimental system induced complex behaviours in the chemical soup.

"This non-linearity is a prerequisite for all the interesting lifelike behaviours we're looking for, including self-propagation and evolution," says Vincent.

Cautiously excited with their preliminary success, Baum and his team are now eager to recruit others to help them refine their system.

"We wanted to develop a system that we can probe further to address questions about evolvability. And hopefully other labs will use this protocol and improve it," says Baum. "This is exactly where we wanted to be." 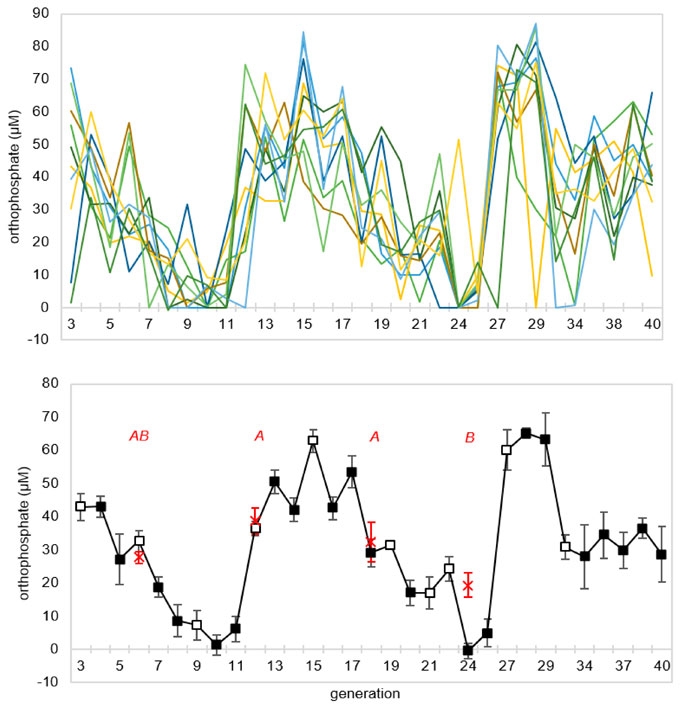 Oscillations:
When the researchers extended their experiment to 40 generations, they spotted repeating oscillations in the concentration of phosphate, one of the key starting materials in their chemical soups. These oscillations suggest the development of feedback loops, which are one characteristic of life. Credit: David Baum Lab