From 3D to 2D and back: Reversible conversion of lipid spheres into ultra-thin sheets

Scientists at the Tokyo Institute of Technology (Tokyo Tech) and the University of Tokyo have developed a technique for the reversible conversion of 3D lipid vesicles into 2D ultra-thin nanosheets. Both the stable nanosheets and the reversible 2D–3D conversion process can find various applications in the pharmaceutical, bioengineering, food, and cosmetic sciences. 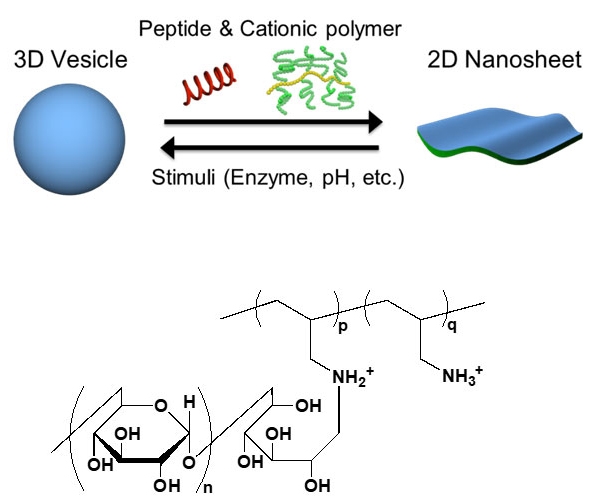 3D vesicles can be reversibly converted to 2D nanosheets via the cooperative action of a peptide and a cationic polymer called PAA-g-Dex, whose chemical structure is shown.

An astonishing number of recent technological advances and novel engineering applications go hand in hand with progress in the field of materials science. The design and manipulation of materials at the nanoscale (that is, on the order of billionths of a meter) has become a hot topic. In particular, nanosheets, which are ultra-thin 2D planar structures with a surface ranging from several micrometers to millimeters, have recently attracted much attention because of their outstanding mechanical, electrical, and optical properties. For example, organic nanosheets have great potential as biomedical or biotechnological tools, while inorganic nanosheets could be useful for energy storage and harvesting.

But what if we could go from a 2D nanosheet structure to a molecular 3D structure in a controllable and reversible way? Scientists from the Tokyo Tech and The University of Tokyo have conducted a study on such a reversible 2D–3D conversion process, motivated by its potential applications. In their study, published in Advanced Materials, they first focused on converting spherical lipid vesicles (bubble-like structures) into 2D nanosheets through the cooperative action of two compounds: a membrane-disruptive acidic peptide called E5 and a cationic copolymer called poly(allylamine)-graft-dextran (or PAA-g-Dex, for short). They then attempted to revert the lipid nanosheets back to their 3D vesicle form by modifying specific conditions, such as pH, or using an enzyme (Fig. 1), and found that the reaction was reversible.

Thus, through various experiments, the scientists elucidated the mechanisms and molecular interactions that make this reversible conversion possible. In aqueous media, planar lipid bilayers tend to be unstable because some of their hydrophobic (water-repelling) tails are exposed on the edges, leading to the formation of vesicles, which are much more stable (Fig. 2). However, peptide E5, when folded into a helical structure with the aid of PAA-g-Dex, can disrupt the membrane of these vesicles to form 2D nanosheets. This pair of compounds combine into a belt-like structure on the edges of the nanosheets, in a process that is key to stabilizing them. Professor Atsushi Maruyama, who led this research, explains "In the sheet structures observed in the presence of E5 and PAA-g-Dex, the assembly of E5 and the copolymer at the sheet edges likely prevents the exposure of the hydrophobic edges to the water phase, thus stabilizing the nanosheets." (see Fig. 3) The sheets can be converted back to spherical vesicles by disrupting the belt-like structure. This can be done by, for example, adding the sodium salt of poly(vinylsulfonic acid), which alters the helical shape of E5.

The scientists' experiments showed them that the nanosheet is very stable, flexible, and thin; these are properties that are valuable in biomembrane studies and applications. For instance, the 2D–3D conversion process can be used to encapsulate molecules, such as drugs, in the vesicles by converting them into sheets and then back into spheres. "Lipid vesicles are used for both basic studies and practical applications in pharmaceutical, foods, and cosmetic sciences. The ability to control the formation of nanosheets and vesicles will be useful in these fields," concludes Prof. Maruyama. Undoubtedly, improving our ability to manipulate the nanoscopic world will bring about positive macroscopic changes to our lives.

Figure 2. Model of the 3D vesicles

3D vesicles consist of a lipid bilayer and spontaneously form in aqueous solutions. A fluorescence confocal microscopic image is shown to the right (scale bar: 10 μm).

Figure 3. Model of the 2D nanosheets

The edges of the lipid nanosheets are stabilized by a self-assembled molecular belt composed of PAA-g-Dex, shown in yellow and green, and the E5 peptide, shown in red (scale bar: 10 μm).

*
This article has been updated to include the related link on February 27.