Scientists at Tokyo Institute of Technology have uncovered some new aspects of how connections in networks can influence their behavior over time. Usually, network elements with many connections generate more complex activity than others, but this effect can become inverted if the connections are overly strong. In contrast, in cases such as neurons, which behave in a seemingly random way when by themselves, connectivity can result in more regular and predictable patterns. 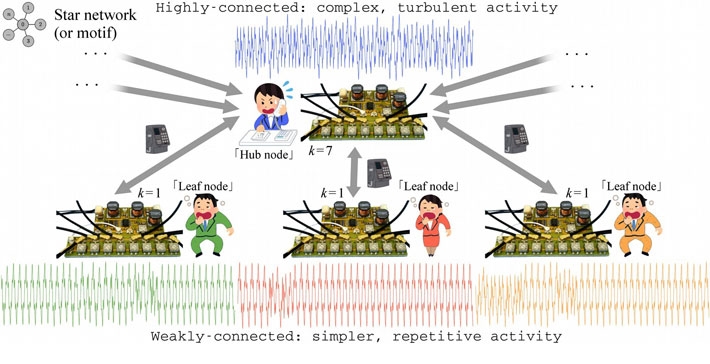 The idea underlying this study is that in a network arranged with a given architecture (for example, a star network) and under suitable conditions, the node(s) having the largest number of connections (top) spontaneously develop more complex activity than those having only a few or even just one connection (bottom). Here, an example involving electronic oscillators is shown. (Image usage restrictions: None, Image credit: Ludovico Minati)

It is common to find examples of how people with many connections—social or professional—tend to have a rather turbulent and unpredictable daily life compared to those with fewer relationships, who usually follow routines that are more regular. This difference is particularly evident when specific individuals or communities are compared, such as top managers versus operatives, or people living in a metropolis versus people living in the countryside.

This can be extended to natural and engineered networks of interacting elements—from neurons to coupled oscillators and wireless terminals—where the "nodes" (the network elements where the connections intertwine) having more connections tend to have richer dynamics (activity unfolding over time). Understanding the intricacies of networks within a system can give us a holistic view of that system, which is useful in both biology and engineering.

published in the journal IEEE Access, researchers in Japan and Italy studied using theoretical and experimental methods the dynamics of networks in various natural and engineered systems. This research was the result of a collaboration between scientists from Tokyo Institute of Technology (Tokyo Tech), in part funded by the World Research Hub Initiative, and the Universities of Catania, Palermo, and Trento in Italy.

The research team began by analyzing purely mathematical scenarios. First, they simulated elementary star-shaped networks, where most nodes (called "leaves") have a single connection to a central node (called "hub"); each node consisted of a so-called Rössler system, which is an elegant set of equations able to generate quite intricate behaviors. It became evident that the hubs in these networks almost always exhibit a more complicated behavior than the leaves, because they are influenced by many different nodes at the same time. But, if the connections between nodes are too strong, their outputs become rigidly bound to each other and this relationship is lost, whereas if they are too weak, the effect vanishes.

Interestingly, this phenomenon was also seen in a physical network made of electronic oscillators connected to each other using resistors (Fig. 1). "It was quite surprising to notice how strong the tendency for the hub and leaf nodes to behave differently is," explains Assoc. Prof. Hiroyuki Ito, co-author and head of the laboratory where these concepts will be applied to solve sensing problems in the field of Internet of Things (IoT).

To dig deeper into this phenomenon, the researchers conducted further numerical simulations with more complicated networks containing higher numbers of nodes and more intricate connection patterns. They found that the relationship also generally applies to such systems unless the individual connections are too strong, in which case the trend can even flip and cause nodes with fewer connections to exhibit more complex activity. The reason for this inversion is not known yet, but it can be imagined of as the highly connected nodes becoming "paralyzed" and the rest "taking over" (Fig. 2). "There remains much to be clarified about how the structure and dynamics of networks relate to each other, even in simple cases," says Assoc. Prof. Mattia Frasca, from the University of Catania.

Figure 2. Architecture and tightness of the connections

Results of numerical simulations showing the relationship between the number of connections (circle diameters) and complexity of activity (blue-red hue). In scale-free networks, a few "hub" nodes have disproportionately many connections: those nodes usually generate richer activity patterns than the others, but the effect may be lost of even inverted if each connection, or coupling, becomes too intense (left). In totally random networks, the number of connections is distributed more uniformly, so this relationship is not observed easily (right). (Image usage restrictions: None, Image credit: Ludovico Minati)

The scientists then moved on to investigating one of the most complicated types of natural networks: those made of neurons. Unlike mathematical or engineered systems, isolated living neurons are quite unpredictable because they are often subjected to forms of randomness or "noise". By analyzing the activity of living neurons through simulations as well as measurements, the researchers found that a greater connectedness may help them reduce this noise and express more structured patterns, ultimately allowing them to function "usefully." "Earlier studies about brain function show similar relationships between cortical areas. We think that a better understanding of these phenomena could also help us improve brain-computer interfaces," adds Prof. Yasuharu Koike, head of the laboratory focused on topics at the interface between engineering and biology.

This study sheds light on how knowledge of the intricacies of a network system can be used in different fields. Assoc. Prof. Ludovico Minati, lead author of the study, talks about the implications of the study, "While caution and humbleness need to be exercised not to fall into making excessively generalist statements, studies such as this one may exemplify the potential inspirational value of multidisciplinary research, which can impact not only engineering and biology but even management concepts."

Figure 3. Regularity emerging out of noise

The Japanese word "fureai" is an amalgamation of the words "fure" and "ai", meaning "touch/contact" and "mutuality", respectively. This concept goes beyond its literal meaning; it stands for the emotional connection between human beings and the connections formed socially.