Tokyo Tech cycle-ballers Sayaka Kizawa and Moku Fujito have won the women's category at the 50th All-Japan Indoor Cycling Championships, held on December 14 and 15, 2019. This was the first Championships to include an all-women's contest, and the Institute's women now stand proud as the inaugural champions. 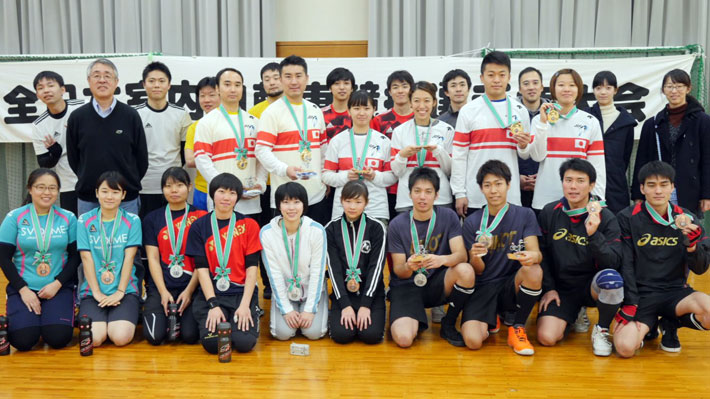 Kizawa and Fujito (center, middle row) with other top performers

The All-Japan Cycling Championships is open to all members of the public. This year, eighteen male and four female cycle-ball teams competed. Kizawa, a 4th-year Architecture and Building Engineering student, and Fujito, a 3rd-year Physics student, formed one of all-female teams in the competition.

On the first day, the ladies battled it out in round robin format. On day two, the Tokyo Tech duo met a joint Kansai University-Ritsumeikan University team in the finals. After a scoreless first half, the second half was tense. With one minute left in the match, Tokyo Tech was awarded a free kick in a good position. They scored and took home the first ever Japan women's championship in cycle-ball.

In the men's action, 4th-year Systems and Control Engineering student Kakeru Masuda and 3rd-year Architecture and Building Engineering Keita Ichihashi — the winners of the All-Japan Collegiate Cycle-ball Tournament — reached the top eight before bowing out. 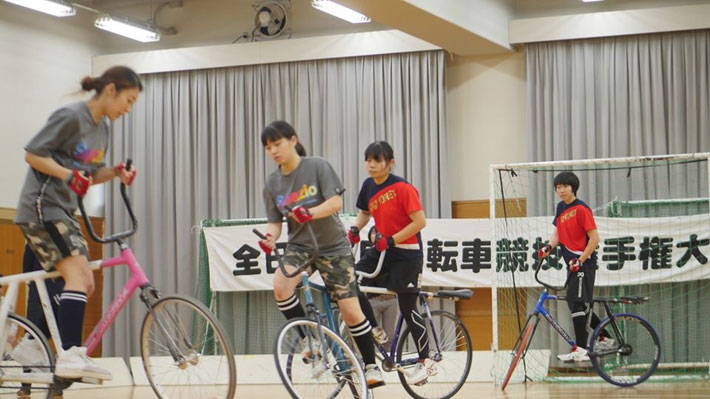 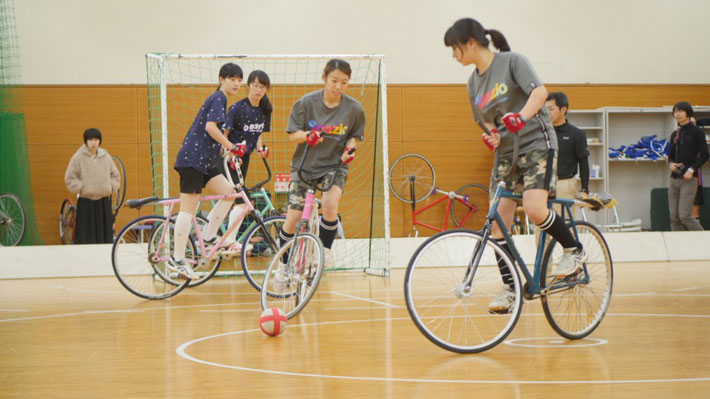 Kizawa and Fujito forcing the opponent to defend

I am very happy to have won this commemorative event. We could not have achieved victory without our teammates who so often practiced with us. Thanks to them, I have been able to continue playing this sport.

It took a lot of hard work from many people to form a women's category, but we achieved it and were finally able to hold a formal competition. Thank you very much to all those involved! I hope we can continue to attract more female players and hold even bigger contests in the future!

Cycle-ball is not a very popular sport, but that in itself is an advantage. We really have an opportunity to book our place in the world championships, which will probably include a women's category soon. I look forward to gaining more experience and developing myself further through cycle-ball.

I feel that I have developed by patience and ability to try new things — especially things that many others have not tried — through this sport. I will strive to utilize these qualities and skills not just in future cycle-ball events, but also in my studies and life after leaving Tokyo Tech.

This was the first time the All-Japan Indoor Cycling Championships included a women's cycle-ball category, and I am very pleased that we are the inaugural winners! I would like to thank all my teammates, practice partners, and the people who helped in making the women's category a reality.

Until recently, female cycle-ball players, who are still hard to find, had to compete in mixed teams with men. This was a disadvantage due to the gap in physique between the sexes. I think this official contest for female teams was a huge step in the right direction for the sport. It truly has been a valuable experience to be involved in creating cycle-ball history.

While there are few competitive cycle-ballers, the sport is both intense and enjoyable. It can provide players with a variety of rich experiences, and I sincerely hope the sport continues to gain popularity.

I will be a 4th-year student in April, which means I will be joining a lab within the Physics Department. This transition will bring with it new challenges, but I hope I can find time to continue playing cycle-ball alongside my research.

Cycle-ball is a soccer-like sport played indoors by two teams usually consisting of two players each. Using a specially adjusted bicycle with no gears or brakes, players dribble, pass, and shoot the ball using the wheels of their bicycles. As most of the action takes place while standing on the pedals, the handlebars face upwards and the bike allows players to pedal backwards.