The men of the Tokyo Tech Kyudo Club have been promoted to League 2 by the Tokyo Metropolitan Intercollegiate Kyudo Federation for academic year 2019. The team secured their place in the second highest tier after winning League 3. Tokyo Tech defeated Toyo University 121-108 in the final on October 19 and Rikkyo University 126-114 in the promotion-relegation game on the next day.

Aida was awarded the Kaichu Award after hitting the target with all 20 arrows in a league match against Tokyo University of Science. Takeuchi was commended in the women's league for her overall 0.813 accuracy rate, earning her 10th place in the leage. Kashimura also had a strong final year before retiring from the club.

I am extremely happy that we not only won League 3 but were promoted to League 2 this year. While I did not participate as much as the others this season, this promotion has been our goal for a long time, and seeing it happen was very emotional. The upperclassmen who taught me so much will retire, which mean that next academic year, I will be captaining the team. I feel both excited and inspired. It will be my job to unite and push the Tokyo Tech Kyudo Club to new heights while balancing these activities with my studies. We thank everyone for their continued support.

I am extremely happy about our results. We won Block A in League 3 like last year, but this time we also achieved a promotion to League 2, which had been our long-term goal. We sensed that this was our year before the season began, and our confidence grew throughout, which made this result possible. As the captain, I often felt that I was holding the team back, but the support from other archers, including those who had to sit out some competitions, gave us the strength to win the matches we had to.

This competition was my last, and I am now retiring from the club. This will give me more time to focus on my studies. I hope the other members will continue to develop and improve the Tokyo Tech Kyudo Club. 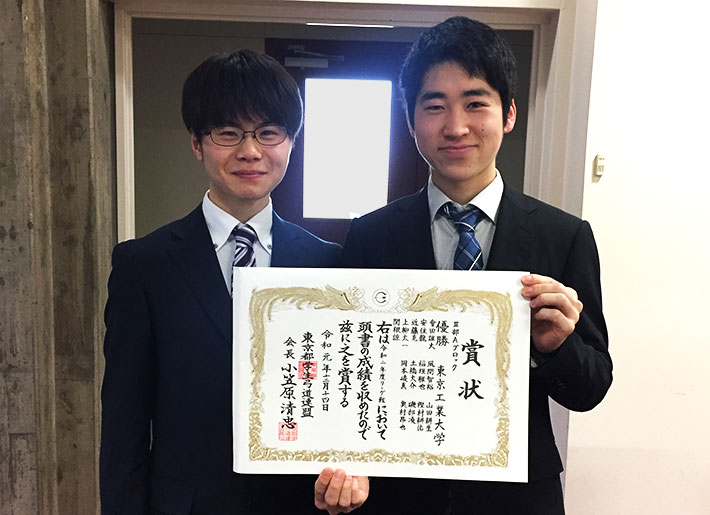 Aida with his sharpshooter certificate

I am a 4th-year student so this is obviously my last year in the Kyudo Club. I actually retired last year after joining a lab in the Department of Materials Science and Engineering, but I was encouraged to return after finding a good balance with my research life. I am extremely pleased to have made a comeback and produced a good result. What's even better is that I was able to contribute to the team's promotion to League 2, which is a big achievement for us.

I would like to thank my professors, teammates, and mentors for allowing me to end my time as a Kyudo Club member in the best possible way.

Takeuchi with her overall accuracy certificate

At this year's league matches, I was able to achieve tenth place in overall accuracy among individual female competitors. I felt uneasy as I was not performing well during practice sessions, but thanks to my fellow Tokyo Tech competitors and the support I received from other teammates, I was able to produce a good result. I could not have done this alone.

I will be leaving the Kyudo Club this year as I will soon be starting life in a lab. I will do my best to dedicate more of my time to research while continuing to watch over my successors at the club.

The Tokyo Tech Kyudo Club studies and practices the Heki-ryu Insai branch of Japanese archery under the guidance of Masters Hiroko Urakami and Takashi Isobe. The club currently consists of fifteen male and five female members. Three practice sessions a week are held at the Ookayama Campus field, but members are also free to practice independently at a time that suits them best. Over two-thirds of current members began kyudo after entering university, and everyone is encouraged to participate in competitions.