Many Buds to a Blossom: a Synchronization Approach to Sensing Using Many Oscillators to Make a Measurement

Engineers at the Tokyo Institute of Technology (Tokyo Tech) have found a new approach of taking a measurement over an extended area. The technique is based on coupled "chaotic oscillators," which are highly sensitive electronic circuits that can interact wirelessly through low-frequency low-power electromagnetic coupling. By making each oscillator sensitive to a quantity of interest, such as light intensity, and scattering a number of them sufficiently closely, it is possible to "read out" useful measurement statistics from their collective activity. This technology has many possible applications in biomedical, environmental, and structural monitoring. 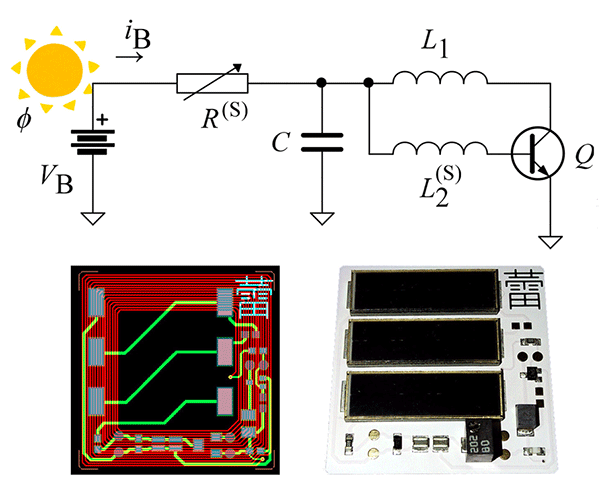 Each sensor node consists of a circuit made of just a photovoltaic source, a variable resistor, a capacitor, two inductors and a bipolar transistor (top). One inductor is realized as a printed layer onto the circuit board and used for coupling (bottom, left). The overall design is quite compact, with the majority of the 32 × 32 mm board area taken up by the solar cells. (Image usage restrictions: None, Image credit: Ludovico Minati)

When one thinks of measuring something, the first idea that comes to mind is that of taking a tool, such as a caliper, reaching out to a specific place or thing, and noting down a number. There is no doubt that, in many domains of engineering and science, taking reliable measurements at well-defined locations is fundamentally important. However, this is changing in today's connected world because we attempt to distribute technology everywhere for improving sustainability. One quickly emerging need is that of efficiently making measurements over relatively large surfaces or objects, for example, comprehensively assessing the soil water content over an entire cultivated plot, checking for cracks throughout the whole volume of a concrete pillar, or sensing tremors across all limb segments in a patient.

In such cases, a measurement taken at a single location is not enough. There is a need to use many sensors, scattered approximately evenly over the area or object of interest, giving rise to a set of techniques termed "distributed sensing." However, this technique has a potential problem: reading out data from each individual sensor may require considerable infrastructure and power. Especially in situations where only a reliable average or maximum value needs to be computed, it would be preferable if sensors could simply interact between themselves as a population, effectively "coming to an agreement" over the desired statistics, which could then be read out in a way that does not require interrogating each node individually.

However, implementing this electronically is not easy. Digital radio and processing technology is always an option, but is very demanding in terms of size, power, and complexity. An alternative approach is to rely on analog oscillators of a peculiar type, which are very simple but endowed with a remarkable ability to generate complex behaviors, separately and collectively: the so-called "chaotic oscillators." Now, researchers in Japan and Italy propose a new approach to distributed measurement based on networks of chaotic oscillators [1]. This research was the result of a collaboration between scientists from the Tokyo Institute of Technology, in part funded by the World Research Hub Initiative, the Universities of Catania and Trento, Italy, and the Bruno Kessler Foundation, also in Trento, Italy.

The research team started from the idea, introduced in a previous study [2], that coupling chaotic oscillators, even very weakly as in the case of over-the-air using inductor coils or other antennas, makes it easy for them to create meaningful collective activity. Surprisingly, similar principles seem to arise in networks of neurons, people, or, indeed, electronic oscillators, wherein the activity of their constituents is synchronized. By rendering each oscillator responsive to a particular physical magnitude, such as light intensity, movement, or opening of a crack, it is effectively possible to engender a "collective intelligence" via synchronization, effectively responding to changes that emphasize the sensitivity to an aspect of interest while being robust against perturbations like sensor damage or loss. This is similar to the functioning principles of biological brains.

The key to realizing the proposed circuit was to start from one of the smallest chaotic oscillators known, involving just a single bipolar transistor, two inductors, one capacitor, and one resistor. This circuit, introduced four years ago by Dr. Ludovico Minati, the lead author of the study, and co-workers, was remarkable for its rich behaviors that contrasted with its simplicity [3]. Such a circuit was modified so that its power source would be a compact solar panel rather than a battery, and so that one of its inductors could enable coupling via its magnetic field, effectively acting as an antenna. The resulting prototype device was found to be able to reliably produce chaotic waves depending on the level of light. Moreover, bringing multiple devices closer would cause them to generate consonant activity in a manner representative of the average light level. "Effectively, we could do spatial averaging over-the-air just with a handful of transistors. That's incredibly fewer compared to the tens of thousands that would be required to implement a digital processor at each node," explain together Dr. Hiroyuki Ito, head of the laboratory where the device prototype was built, and Dr. Korkut Tokgoz from the same laboratory. The circuit design and results are carefully detailed in the article that has recently appeared on the IEEE Access journal [1].

But perhaps even more remarkable was the discovery that the best way of harvesting information from these nodes was not just listening to them, but gently stimulating them with an "exciter" signal, generated by a similar circuit and applied using a large coil. Depending on many factors, such as coil distance and circuit settings, it was possible to create various behaviors in response to the level and pattern of illumination. In some situations, the effect was an increased synchronization, in others dissipated synchronization; similarly, there were cases in which one sensor would "pull" the entire networks towards irregular, chaotic oscillation, and others when the opposite happened. Most importantly, accurate and robust measurements could be obtained from the sensors via the activity of the "exciter" circuit, acting as a proxy. Because providing the exciter signal allows observing many aspects of dynamics otherwise "hidden" inside the sensor nodes, the researchers felt that it resembled the process of watering flower buds so they can open up and form a blossom (a collective feature). The sensor and exciter circuits were respectively dubbed "Tsubomi" and "Ame", which mean flower bud and rain in Japanese. "Because it is easy to apply this approach with many sensors interacting collectively on the scale of a human body, in the future we would like to apply this new technique for reading out subtle movements and biological signals," explain Prof. Yasuharu Koike and Dr. Natsue Yoshimura, from the Biointerfaces laboratory where some proof-of-concept tests were carried out.

"This circuit draws its beauty from a truly minimalistic design gently attuned for operating collectively in a harmonious manner, giving rise to something which is so much more than the individual components, like how a myriad of small flowers creates a blossom," says Dr. Ludovico Minati, whose entire research is now dedicated to emergence in nonlinear electronic circuits. This, he explains, is yet another example of how Nature can inspire and guide new engineering approaches, less grounded in prescriptive specifications and more focused on emergent behaviors. The difficulties encountered while applying this approach remain considerable, but the potential rewards are enormous in terms of realizing complex functions in the most economical and sustainable manner. "Multidisciplinary integration is truly the key to success of precursory research such as this one," notes Prof. Mattia Frasca from the University of Catania, Italy, whose work on complex circuits and networks was a fundamental basis for this collaborative research. 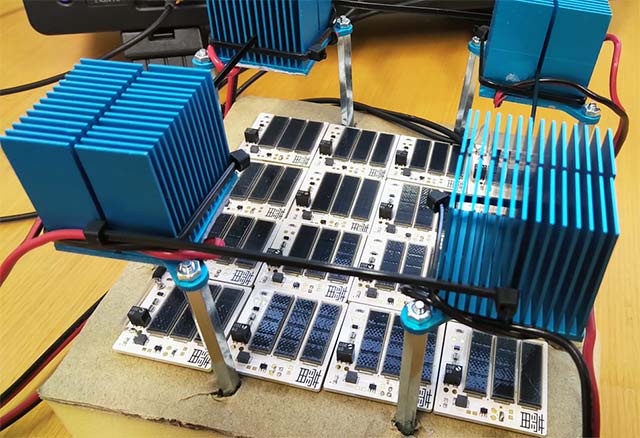 To investigate the collective behavior of the sensors, a 4 × 4 array was prepared in the laboratory under a shielding enclosure. These sensor boards are pictured overlaying a coil connected to the exciter oscillator. Four high-power LEDs (under the blue heatsinks) provided controllable illumination, mimicking sunlight and representing the physical variable to be reconstructed from the dynamics. (Image usage restrictions: None, Image credit: Ludovico Minati) 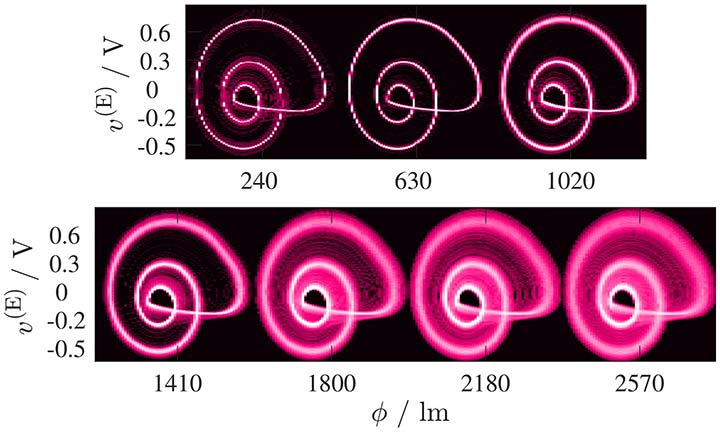 As a function of the light intensity, the dynamics of each sensor node could change from periodic (weak illumination) to markedly chaotic (strong illumination). Reconstruction of the temporal trajectory of the signal (known as attractors) revealed a characteristic snail-like shape, which was similar among the physically-realized boards, and boards thus allowed synchronization to arise between them. (Image usage restrictions: None, Image credit: Ludovico Minati) 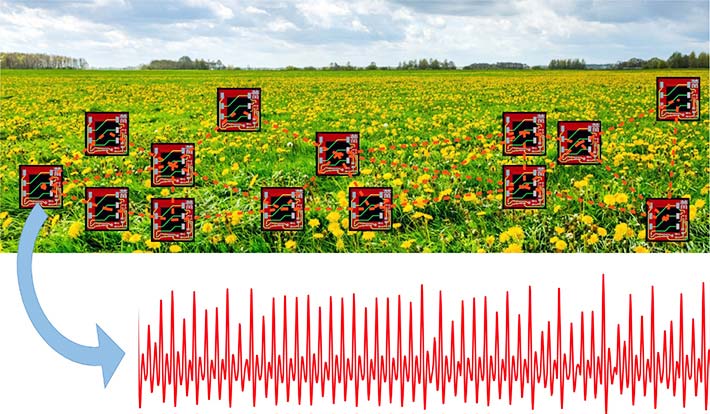 Figure 4. Example of a future application

In this artist's impression, light-sensitive nodes are scattered over a cultivated field. By virtue of the coupling mechanism, each one is able to interact only with those closer to it, but collectively a coherent activity emerges. Because the latter is similar among the nodes, it is sufficient to record a signal from one of them in order to obtain an estimate of the illumination level over the entire surface. This situation, wherein "the whole is contained in each part" makes it easier to conduct a measurement, compared to having to access each sensor directly. (Image usage restrictions: None, Image credit: Ludovico Minati)