We need to talk: Communication prevents inaction by leveraging goodwill 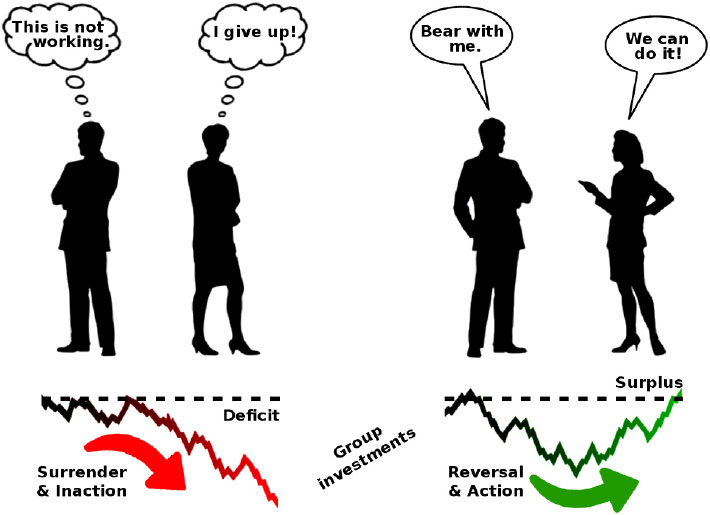 When facing a common problem, a group of people may fall victim to free riding if individuals are left to their own devices (left). Communicating individuals, however, stave off inaction by leveraging pre-existing goodwill, even if communication is limited (right).

A large-scale, multi-institutional study designed to examine human behavior has shown that communication helps groups of strangers to focus on resolving common problems, and provides new and surprising insights into what goes on when negotiation talks fail or succeed. The findings have implications for how to confront global, collective-action issues such as climate change mitigation.

Challenging global issues are frequently accompanied by shared associated risks, and without a concerted effort, resolution is hard to achieve. Climate change talks often stall when nations start accusing one another of contributing too little. When such a stalemate arises, it becomes unclear how to move forward or how to make involved parties adhere to agreed-upon terms.

Waiting for others to resolve common problems is recognized in behavioral studies as a form of free riding, which can ultimately hinder the group's chances of achieving a given goal. To examine what causes free riding, and how to stave it off, a team of international researchers coordinated by Marko Jusup from Tokyo Institute of Technology (Tokyo Tech) in Japan and Zhen Wang from Northwestern Polytechnical University in China conducted a so-called social-dilemma experiment through which the team could investigate whether communication might help improve cooperativeness among strangers tasked with avoiding a shared risk.

In each round of the game, players had to decide whether to invest their capital toward mitigating the shared risk, or to forgo investing and take more of the capital home, provided that the risk had not materialized. Thus, the dilemma was whether to invest one's own capital or wait for others to act.

Investment options consisted of zero, two, or four units of capital — if everybody invested two units in every round of the game, the risk would be mitigated with certainty. Groups of, for example, seven individuals playing ten rounds of the game had to reach a target of 140 units to mitigate the risk. The initial capital consisted of 40 units per player. To make informed decisions, players could see their group's current-round investment, as well as the remaining amount towards the target. Failure to reach the target entailed losing any capital saved during the game, and going home empty-handed, with 50% probability.

Approximately half of the players engaged in games in which no communication was possible. These players relied on their own devices to decide whether to invest or not. The other half played the same games, but with limited communication. This communication took place between game rounds, in the form of five yes/no questions designed to gauge sentiment and outlook harbored by player groups.

Across all group sizes, the study found that communication increased the likelihood of reaching the target by almost two-fold. The results thus confirmed a natural expectation that communication promotes cooperativeness, but the story does not end with a more cooperative environment created simply by persuading free riders to invest.

Intriguingly, the researchers found that players who communicate are more persistent in pursuing the investment target and refuse to give up even in the face of substantial current deficits. Genuine free riders appear to pay little attention to communication. It is players who already possess prosocial tendencies that, when communicating, better endure setbacks, and thus fight off inaction as the failure looms.

"Without communication, prosocial players shut down upon seeing nothing but a widening deficit. With communication, however, these same players stay hopeful thanks to cooperation-reinforcing signals from others," write the researchers in their study published in the journal Proceedings of the National Academy of Sciences.

The study identified two prosocial behavioral types, namely cooperators and altruists. While altruists contribute almost unconditionally, cooperators are rather more astute, weighing carefully when and how much to contribute. Too much caution, however, often leads to near-misses of the investment target, meaning that even if just a few individuals fail to give their best at crucial times, the whole effort may be in vain. This is reflected in the fact that larger groups of communicating players often come close to mitigating the risk, but ultimately fail by a narrow margin. The overall lower success of larger groups points to additional challenges in coordinating an increasing number of individuals and highlights the insidious nature of collective-risk social dilemmas.

What, then, can be done to curb free riding and improve the situation for complex issues such as climate change talks? "The key is to leverage pre-existing goodwill, especially when an otherwise contributing side starts to doubt success," says Jusup. "Persuading those who a priori have no intention to contribute is unlikely to amount to much," adds Wang. Both researchers conclude that although experimental games can help uncover the mechanisms underlying mitigation efforts, caution needs to be heeded in extrapolating the study's findings beyond experimental conditions.

*
This article has been updated to correct a typographical error and add DOI on July 16.