To maneuver microparticles into specific positions, scientists often use the "ratchet transportation," a technique utilizing time-varying electrical fields to encourage movement. Theoretical studies have suggested that "particle density," or the number of particles in an area, can be utilized to develop a novel ratchet transportation with a "static" electrical field even without the time-varying one. Now, scientists from Tokyo Institute of Technology (Tokyo Tech) have demonstrated that this is possible in an experimental study. 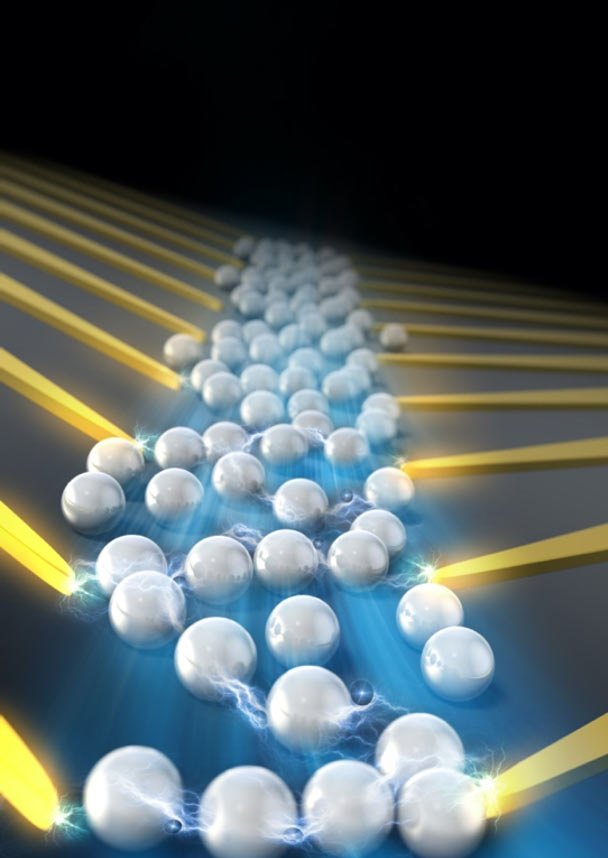 Science that teaches us to look macroscopically at the big picture, also emphasizes equally the importance of looking at the small, on the microscopic level. After all, this is often where the answer to many of humanity's problems lie. In the quest for microscopic answers, scientists have come up with many incredible solutions, and one such innovation is the lab-on-a-chip device. This device assimilates many "laboratory functions", so to speak, on a single millimeter-sized integrated circuit. These chips are a revelation; they find uses in a wide variety of fields spanning from medical to environmental sciences.

Making these chips is a difficult task, however. Due to the microscopic nature of each chip, assembling it requires techniques that work at the microscopic level, in particular to move particles from one location to another. Constructing a device of microscopic proportions and building a brick wall are very different, as the micro-world operates under strikingly different rules to our own macro-universe. Down there, gravity has little power to hold particles in place and the slightest change in electric potential can undo hours of careful maneuvering.

One solution is to take the electric potential modify it "asymmetrically" to shepherd microscopic particles to where they are needed. This technique is called "ratchet transportation," and can be used to move unmoving particles such as molecules and colloids. Controlling the asymmetric electric potential, however, is essential. Scientists have suggested many theories to overcome this, but no studies put these theories into practical application.

A research team from the Tokyo Tech, headed by Dr. Masahiro Takinoue, decided to look beyond the traditional methods of ratchet, and instead preferred a new technique where they would observe the interactions of particles crowded together, and have published their findings in Advanced Intelligent Systems. Their theory was that crowded particles would interact with one another and result in the ratchet transport, accelerating the development of ratchet transport techniques. "A successful experiment," in the words of Dr. Takinoue, "would enhance the development of smart applications in lab-on-a-chip devices and electrically controlled molecular robots."

The team used gold to create twin two-dimensional "sawtooth" electrodes on a glass micro-scope slide, as shown in Figure 1. The sawtooth pattern of the electrodes generated a static asymmetric electric field rather than a time-varying one, encouraging motion. Using these electrodes to distribute an asymmetric electric field, the team observed sparsely distributed microscopic polystyrene particles moving back and forth in a predictable pattern. When the particles were crowded together, however, the particles interacted with one another and underwent unidirectional movement, successfully migrating from one end of the electrode towards the other, as illustrated in Figure 2. 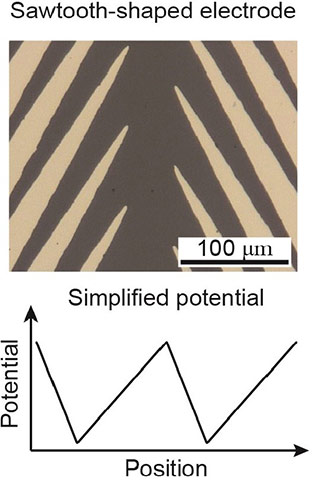 The sawtooth pattern on the twin electrodes allows for an asymmetric electric field, encouraging movement. 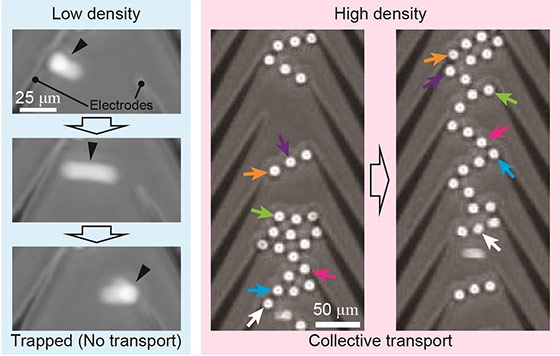 Here, the sparsely populated particles move in a stable "back and forth" motion, trapped in the same position. The crowded particles, on the other hand, migrate steadily towards the top, indicating the successful unidirectional transportation of particles.

Using these findings, the team has produced an abstract model to illustrate collective ratchet transport. The model succeeded in depicting the crowding behavior observed in the experiment, verifying the theory that particle interactions in crowds would positively affect ratchet transportation techniques.

Dr. Takinoue is hopeful that the study "can lead to the development of transport techniques on a micrometer scale with sophisticated functions such as changes in the transport direction, and sorting in accordance with the particle shape and size," allowing us to build new micro-robotics, lab-on-a-chip devices, and other life-saving microtechnology.