Scientists at Tokyo Institute of Technology (Tokyo Tech) have now uncovered a key mechanism by which pancreatic function is maintained in response to a high-fat diet. A protein present in pancreatic insulin-producing cells protects them from damage under the stress induced by a high-fat diet. As the world increases its intake of high-fat foods and as type 2 diabetes incidence rises as a result, this protein could be a novel therapeutic target for type 2 diabetes mellitus. 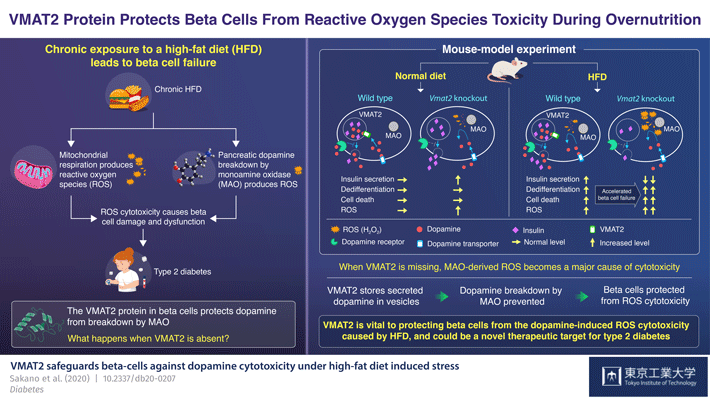 Every time we eat, the glucose level in our body goes up. This spurs our pancreatic machinery into action and through intricate physiological mechanisms, appropriate amounts of insulin are produced, our blood glucose levels are controlled, and we remain healthy. But when a person indulges in high-fat food repeatedly over the long term, their pancreas is consistently overstimulated, eventually contributing to its damage and impairing its function. This increases the risk of developing type 2 diabetes, in which glucose level control mechanisms become lopsided.

Today, high-fat foods have become commonplace and so has diabetes. The need for designing new treatment strategies against diabetes is peaking. But to find an effective therapy, clarifying the causal cellular mechanisms at the core is essential. Now, a group of researchers from Japan, led by Dr Shoen Kume from Tokyo Institute of Technology (Tokyo Tech), have unraveled one key mechanism by which pancreatic function is regulated. Their findings are published in American Diabetes Association's journal Diabetes

The pancreas contains "beta cells", which secrete excess insulin in response to excess glucose and fatty acid in the diet. Dopamine, or the "feel-good" hormone that is commonly known to induce feelings of pleasure, is what controls insulin levels, when excess insulin is produced. In the pancreas, a protein called VMAT2 ferries dopamine into sacs called "vesicles" to protect it from degradation by monoamine oxidase (MAO). The dopamine stored in vesicles is then released along with the insulin into the extracellular space of beta cells, where it binds to its specific receptor on the plasma membrane of the beta cells and acts as a brake for insulin secretion. Thus, through the modulation of dopamine, VMAT2 regulates pancreatic insulin levels as well.

Meanwhile, the degradation of dopamine by MAO produces a type of chemical called "reactive oxygen species", which when generated in excess, damages the beta cells.

But how do all these dots connect? "We wanted to understand the exact mechanism by which VMAT2 and dopamine signaling regulate beta cell function and glucose homeostasis" Dr Kume says.

To this end, Dr Kume and team created a genetically mutant mouse model, the beta cells of which would be deficient in the VMAT2 protein: the "βVmat2KO" mouse. They then ran experiments in which they fed these and wild type mice both a regular diet and a high-fat diet and monitored subsequent changes in their beta cell structure and function over the weeks that followed. In the immediate aftermath of being fed, the βVmat2KO mice, as expected, showed increased insulin secretion. But with prolonged exposure to a high-fat diet, they showed both impaired glucose and insulin tolerance and beta cell failure.

This prompted the researchers to infer the following: a high glucose and fat diet induces the simultaneous increase in insulin and dopamine production. But when VMAT2 is missing from the beta cell, the dopamine remains exposed to MAO and is degraded by it. However, as the amount of dopamine increases, its reaction with MAO rapidly produces the reactive oxygen species hydrogen peroxide. Over time, this constant oxidative stress leads to beta cell loss and failure. Thus, a high-fat diet accelerates beta cell failure and could cause the βVmat2KO mice to develop diabetes as they get older.

In this scenario, VMAT2 protects beta cells from the oxidative stress that a high fat diet induces in patients with diabetes.

"We were excited to discover that VMAT2, the protein widely known for its crucial role in dopamine transport and storage within pancreatic beta cells, also performs such a critical role in the cell's response to excess nutrition, such as a high-fat diet," Dr Kume says. "Our findings underscore the possibility of using VMAT2 as a target for novel therapeutic approaches against diabetes."