Team Maquinista, Tokyo Tech's representatives from the Society for the Study of Robotics student club, have received a Special Award from Toyota Motor Corporation at the NHK student robot online festival, held on September 26. This year, due to the effect of COVID-19, the online festival replaced the traditional NHK Student Robot Contest. 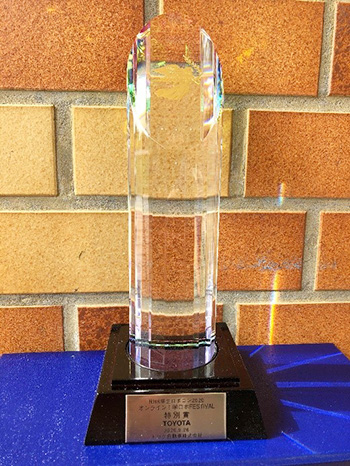 Due to the socially distanced nature of this year's contest, the rules also differed slightly from previous years. In addition to designing machines that matched the "robot rugby" theme of the 2020 student robot contest, participants were also asked to create up to three PR videos that were viewed and scored by the opposition.

Team Maquinista's robots were designed so they could conduct many of the functions required during an actual rugby match. PR Ronnie could accurately pass the ball to his partner and kick the ball through goal posts. TR Sally was capable of receiving even the quickest of passes and grounding the ball to score tries.

On the day of the festival, 27 teams from across Japan connected online to introduce their robots through presentations to their competitors. Seven corporate partners also presented awards to teams that demonstrated particular noteworthy components in their robots or presentations. Maquinista members were visibly pleased to receive the Toyota Motor Corporation Special Award.

I am extremely happy that our efforts were recognized with this award. This year, the traditional NHK Student Robot Contest was canceled, but I am grateful that NHK still decided to hold an online version. I would also like to thank our professors, who mentored and encouraged us to continue with our activities despite the circumstances, and Tokyo Tech for opening up the makerspace, gym, and EEI Building so we could work on our robots. Above all, I want to send a big thank-you to the other members of the team who worked hard to make this happen.

I am currently conducting power electronics research at the Department of Electrical and Electronic Engineering. Maquinista includes students who study materials and physics, and their studies are not necessarily related to robots. That said, anyone with even the slightest interest in robotics can play an active role in the team, regardless of their affiliated School or department.

Maquinista will continue to work towards victory in future robot contests, and we look forward to your support.

Tokyo Tech's Society for the Study of Robotics is an official student club that focuses on the research and development of robotics, including mechanical, electrical, and programming technology. Team Maquinista works at one of the society's labs with the specific objective of winning the NHK Student Robot Contest and the ABU Asia-Pacific Robot Contest.

Maquinista, Society for the Study of Robotics