The Neurobiology of Thirst: The Neural Mechanisms that Control Hydration

Scientists at the Tokyo Institute of Technology (Tokyo Tech) provide deeper insights into neural thirst control. Their study published recently in Nature Communications indicates that cholecystokinin-mediated water-intake suppression is controlled by two neuronal ‘thirst-suppressing’ sub-populations in the subfornical organ in the brain; one population is persistently activated by excessive water levels, and the other, transiently after drinking water.

Water sustains life on earth. The first life originated in an ancient sea, and since then, nearly every species that has existed in the past or lives today depends on the exact balance of salt and water (~145 mM; called body-fluid homeostasis or salt homeostasis) for survival. Humans can go weeks without food but will not last more than a few days without water, stressing the importance of this liquid.

The human body has several intricate mechanisms to make sure we consume an appropriate amount of water for maintaining the homeostasis, which is requisite to survival. One of these simple but key “hacks,” is thirst. When the body experiences dehydration on a hot day (noted by the excess of sodium in the body compared to water, a condition called hypernatremia), the brain sends “signals” to the rest of the body, making us crave the tall glass of water. On the other hand, under a condition called hyponatremia, where there is a more water than sodium, we suppress water drinking. The neural mechanisms of how this happens are a subject of great interest.

A team of researchers from Tokyo Institute of Technology, headed by Prof Masaharu Noda, have conducted extensive research into this. In their previous studies, they identified that thirst is driven by the so-called “water neurons” in the subfornical organ (SFO) of the brain, a region just outside the blood-brain barrier. When the body is dehydrated, the plasma levels of a peptide hormone called angiotensin II increase. These levels are detected by special angiotensin II “receptors” of water neurons to stimulate water intake. In turn, under sodium-depleted conditions (where there is more water than sodium), the activity of these water neurons is suppressed by “GABAergic” interneurons. “The latter control appeared to be dependent on the hormone cholecystokinin (CCK) in the SFO. However, the CCK-mediated neural mechanisms underlying the inhibitory control of water intake had not been elucidated so far,” states Prof Noda.

Now, in their latest study published in Nature Communications, the researchers find out more details about this mechanism. They performed an array of experiments including transgenic mice studies, single cell dynamics, fluorescence microscopic Ca2+ imaging, and optical and chemogenetic silencing to explore the neurons in the SFO.

They made several interesting observations: first, CCK was produced in the SFO itself, by CCK-producing excitatory neurons, which activate the GABAergic interneurons through their “CCK-B” receptors, causing them to suppress the water neurons and inhibit thirst. What's more, there are two distinct subpopulations of these CCK neurons. Group 1, which is the largest population, shows strong and sustained activation under the Na-depleted condition (excessive water in the body). Group 2 shows a more rapid and transient activation in response to water intake, with the activation lasting no longer than 20 seconds. There are hints of a third group as well, but these neurons don't show activation in either condition. 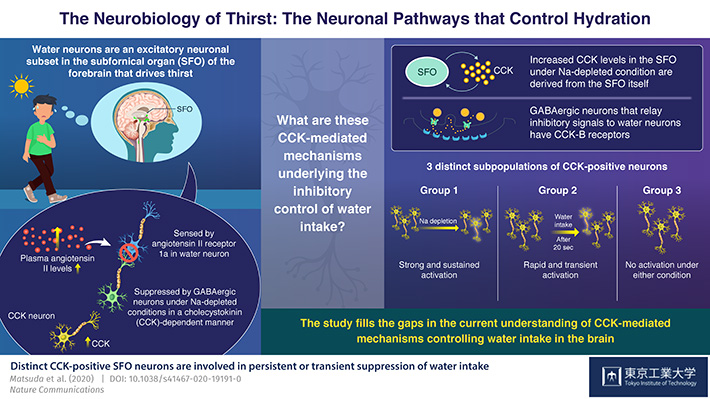 Prof Noda is excited about the implications of this study. “Since CCK has long been noted for being a gastrointestinal hormone, these findings open up many possibilities, the most exciting one being the probability of a negative feedback control of drinking based on water sensing signals from the oropharynx or gastrointestinal tract,” he reports.

The research highlights the roles of CCK in both Group 1 blood-mediated “persistent” and Group 2 oropharyngeal / gastrointestinal “transient” suppression of water intake. The potential of CCK to activate CCK-B receptor-positive different GABAergic interneurons in a cell-type specific manner underlies the mechanism for the functioning of neuronal circuits. Overall, this research has furthered the understanding of the “thirst control” phenomenon substantially.