(Taki Plaza), the new landmark exchange hub on Ookayama Campus, is nearing completion. Physical construction of the facility finished on November 13, and Tokyo Tech's students are now adding final touches to the hub before its grand opening next spring.

Tokyo Tech Grand Prix 2, an event for students to propose ideas for future uses of Taki Plaza, was held on October 21 and 28. This was the second event of its kind after the first Tokyo Tech Grand Prix took place in October 2018. This year, participant numbers had to be kept to a minimum due to COVID-19, so the fastest 15 Japanese students and 15 international students to register were selected for the event.

The theme for the two-day event, "React Pitch Act," encouraged participants from different backgrounds to interact, negotiate, pitch ideas to one another, and express them through final presentations. One important goal was to generate ideas that can be applied and realized at Taki Plaza in the near future. 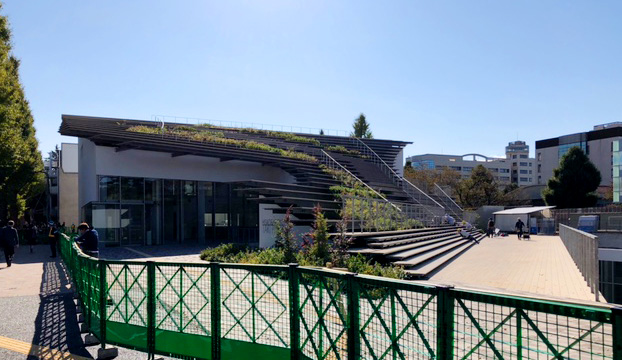 Unlike in 2018, participants now had the entire 5,000-m2 building to examine with their own eyes. After splitting into groups of six on Day One, the participants drew straws to receive one specific challenge for which they were asked to create a solution. These challenges were drawn up by Taki Plaza Gardeners, or TPGs — members of the student group who will help operate Taki Plaza in the future. On Day Two, solutions to these six challenges were presented to the entire group. Overall, all challenges and solutions had a shared goal — to create ideas for making the facility more user-friendly for all students while adhering to the original concept conceived by the main donor of the building — a space where international and Japanese students connect, deepen ties, and create the future together 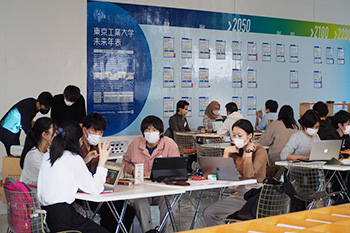 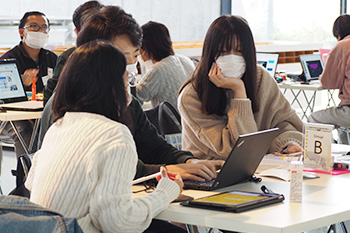 Members of Group B exchanging ideas

The audience for the presentations on Day Two consisted of Gurunavi Inc. Chairman and CEO Hisao Taki, the donor who made Taki Plaza possible, President Kazuya Masu, Executive Vice President Tetsuya Mizumoto, and numerous members of Kengo Kuma and Associates, the architects who were involved in the design of the facility. All presentations were given in English, and the participants seemed comfortable with this, expressing and exchanging opinions frankly. 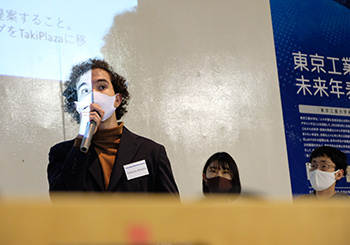 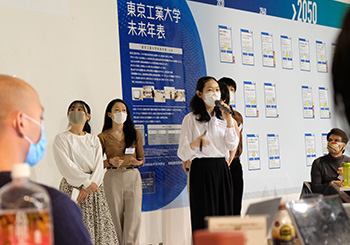 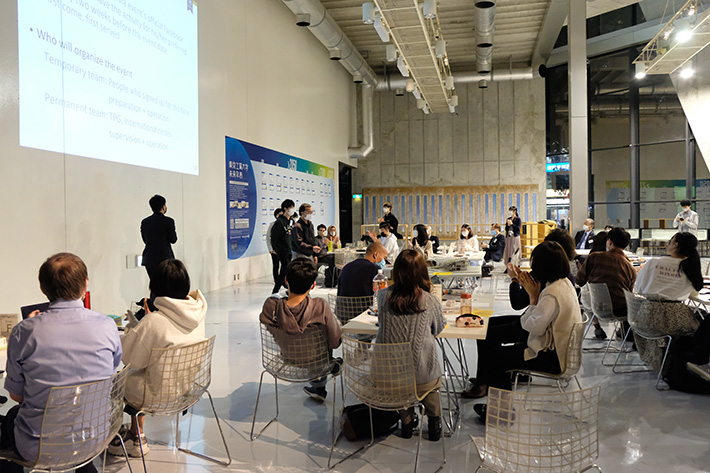 At the end of each presentation, the groups were challenged with numerous questions from the audience. Each presentation was rigorously judged by members of Gurunavi Inc., Kengo Kuma and Associates, Tokyo Tech faculty and staff, and the TPGs. Of the six groups, four were acknowledged with awards for their excellent ideas, particularly in terms of originality and feasibility. 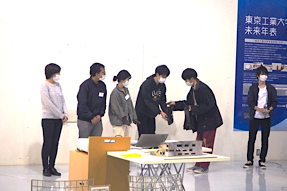 The judges were particularly impressed with the efforts of Group C, who proposed Taki Bar. Taki Bar would offer meals and games from a different country every Friday after classes and lab activities have finished, as inspired by hanakin, the Japanese equivalent of the "TGIF" concept. The group's proposal won the TPG Award and is now being considered for full launch at Taki Plaza. Other ideas presented by the groups were as follows.

Despite the challenging circumstances caused by COVID-19, Tokyo Tech Grand Prix 2 was a successful event to involve the students of Tokyo Tech in campus operations. After the event, a number of international and Japanese students expressed heightened interest in the future of Taki Plaza and became the newest members of the TPG group. The group looks forward to hosting future events where the diverse students of Tokyo Tech unite to create something new together.

Courtesy of the TPG production team