A Tokyo Tech research team led by Specially Appointed Professor Takuya Oda of the Institute of Innovative Research and Professor Keisuke Tanaka of the School of Computing, in collaboration with Mitsubishi Electric Corporation, has developed a new technology an original blockchain[1] technology that can optimize peer-to-peer (P2P) energy trading[2]. The technology is expected to contribute to more effective use of surplus electricity from renewable energy by creating trading environments that flexibly respond to shared trading needs, particularly to maximize the amount of surplus electricity available in the market at any given time. Beginning in April, the P2P energy trading system's performance will be evaluated to further optimize the algorithm as required, aiming at the earliest possible commercialization.

In the collaboration, Mitsubishi Electric has taken charge of designing the P2P energy trading system and its clearing (transaction-completion) functions while Tokyo Tech has handled blockchain technology R&D and the design of an optimal clearing algorithm.

General blockchain technologies, such as those used for trading cryptocurrencies, require a large number of high-performance computers to perform massive calculations, or mining[3], when determining the creator of a new block to record trading information. To clear buy and sell orders, a conventional method[4] can be used to match conditions and process transactions, but this does not optimize matches.

As shown in Fig. 2, using the new technology involves four steps. In the first step, information on buy and sell orders with a common trading goal (market surplus, profit, etc.) are shared by computing servers during a predetermined timeframe. Second, each server searches for buy and sell orders matched to the common goal in the first step. Third, each server shares its search results. In the fourth and final step, each server receives the search results and generates a new block by selecting trades that best meet the shared goal, which it adds it to each blockchain. 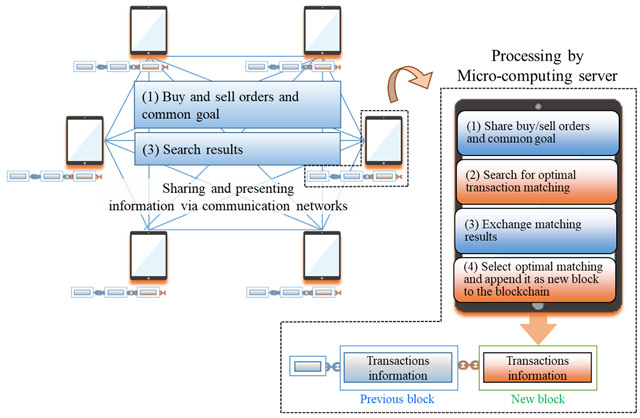 P2P energy trading benefits consumers by enabling them to engage in direct trading as buyers and sellers and sometimes make trades even above offer prices or below bid prices if the right match is found. In addition, since new offers and bids can be issued, a customer who fails to make a trade can improve the chances of making a trade by changing the price or quantity in the next offer or bid after refering to the previous offer/bid conditions.

The trading goal shared among consumers can be changed to meet specific needs. For example, if the goal is to maximize the amount of surplus electricity available in the market, the best offer-bid match can be searched with respect to this common goal. If a surplus exists, the trading price would likely decrease according to market principles and thus demand for recharging electric vehicles would likely increase due to cheaper prices. As a result, surplus power usage would be maximized without retail power companies having to respond to market fluctuations.

To ensure fair trading, the decentralized search of a solution occurs in parallel on multiple computers where equivalent[5] matches are selected randomly.

As a measure against global warming, Japan introduced a feed-in tariffs (FIT) system to enable electric utilities to purchase electricity generated from solar and other renewable energy sources at fixed prices. The law for this system, however, has been gradually retired since November 2019. With buy-seller contracts under the FIT system now expiring, prosumers need to find alternative retail-power suppliers to sell their surplus electricity at acceptable prices.

As a new method of trading surplus power, P2P energy trading is attracting attention by allowing prosumers to directly trade surplus energy at optimal prices. Since the current Electricity Utilities Industry Law allows only retail power companies to sell electricity to consumers, demonstrations are now being conducted to test the use of blockchain technology for P2P power transactions under the management of retail electric operators, aiming at verifying the effectiveness of such transactions while identifying any possible issues.

[1] blockchain : A distributed ledger technology that connects blocks of transaction information in a chain along a timeline

[3] mining : The use of extensive iterative calculations to search for a value that satisfies an uncommon condition. In a typical blockchain, the first person to succeed in a search receives a processing fee.

[4] conventional method : A contract method used in the stock and wholesale electricity markets, known as the continuous double-auction method.

[5] equivalent : Orders where all information, except order name, is the same, including order time, price, quantity and type of buy or sell.