A team of scientists from Japan have found success in growing small intestinal cells, akin to those found in the human body, from human-induced pluripotent stem cells. The scientists used a procedure they previously developed on embryonic stem cells for this discovery. They claim that the grown cells can be used for laboratory studies focusing on human small intestinal drug transport and metabolism. 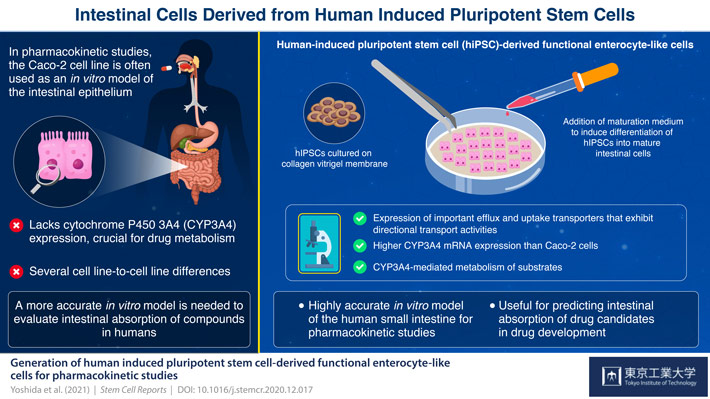 Enterocytes, which line the epithelium of the small intestine, are the sites of absorption and metabolism of most orally consumed medications. For this reason, studies on the absorption of novel oral drugs rely on in vitro or animal models to accurately recreate the environment of the small intestine. Currently, scientists widely use the human colon cancer cell line Caco-2 as a model of the intestinal epithelium. However, this has its drawbacks: Caco-2 cells have been derived from the colon; therefore, they more closely resemble the colon than the small intestine. For example, these cells do not express cytochrome P450 3A4 (CYP3A4), a protein critical for drug metabolism that is abundantly expressed in the small intestine. Moreover, Caco-2 cells tend to show high cell-line to cell-line variations.

To tackle these problems, scientists from the Tokyo Institute of Technology, The University of Tokyo, Kanto Chemical Co. Inc., Shionogi & Co., Ltd. and Shionogi TechnoAdvance Research Co., Ltd., developed novel enterocyte-like cells from human-induced pluripotent stem cells (hiPSCs), which can differentiate into any type of cell when provided with right growth factors.

By modifying a procedure that they previously used on human embryonic stem cells, the scientists initially grew cells that resemble the early stages of small intestine cells, called intestinal progenitor cells. Then, they cultured these progenitor cells on a collagen vitrigel membrane (CVM). Further, they treated the progenitor cells with a maturation medium containing 6-bromoindirubin-3'-oxime, dimethyl sulfoxide, dexamethasone, and activated vitamin D3. Their efforts resulted in the development of enterocyte-like cells that closely resembled actual enterocytes, expressing efflux transporter proteins regulating drug absorption as well as CYP3A4, which Caco-2 cells lack. Dr. Nobuaki Shiraki, Associate Professor at Tokyo Institute of Technology, and one of the corresponding authors of this study, adds, "We established an efficient culture procedure for generating enterocyte-like cells from hiPSCs by culturing the hiPSC-derived endoderm or intestine progenitor cells on CVM."

The scientists claim that these first-of-their-kind enterocyte-like cells can be used as an in vitro model of the small intestine for evaluating the intestinal absorption of drugs in humans. Elaborating on the advantages of using these cells for future studies, Dr. Shoen Kume, Professor at Tokyo Institute of Technology, and co-corresponding author of this study, comments, "The hiPSC-derived enterocyte-like cells established in this study could be used for the quantitative prediction of the intestinal absorption of drugs in humans under special occasions such as alteration of the functions of transporters/metabolic enzymes by drug-drug interactions as well as normal conditions."