Tokyo Tech's Data Science for Particle and Nuclear Physics 2020 (DSPN2020), a lecture and practical training series for high school students, was held on six Saturdays between October and December 2020. 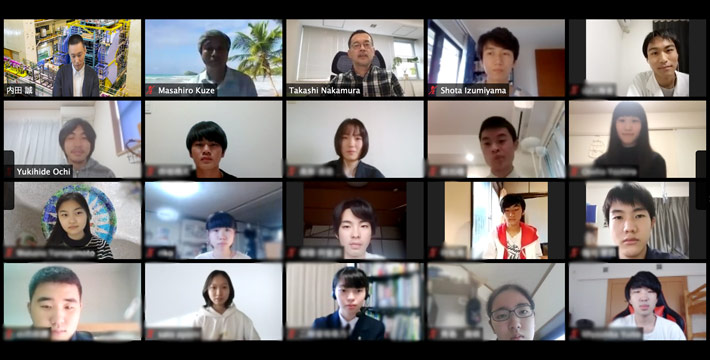 DSPN2020 participants on Day One

The online workshops, supported by Tokyo Tech's STEM Education for Younger Generations fund, attracted twenty-one 1st and 2nd-year high schoolers from around Japan. The aim was to introduce the group to frontline accelerator experiments, and to offer practical experience in data science through the analysis of mainly open data from recent particle and nuclear physics experiments. Lectures and exercises were provided by faculty and students specializing in particle and nuclear physics, many of whom are affiliated with Tokyo Tech's School of Science.

Each session focused on cutting-edge research topics involving modern particle and nuclear physics, with a lecture in the first half followed by a practical training session. During the latter half, physical analysis was conducted using open and pseudo-data from the experimental projects related to the preceding lectures. Topics included CP violation, the Higgs boson particle, neutrino oscillation, and other areas related to Nobel Prizes in Physics since 2000. Through actual analysis, the students were able to deepen their knowledge of various complex topics that they had come across in their high school classes.

Learning the basics of data science

In particle and nuclear physics experiments involving a large particle accelerator, a target is irradiated with accelerated particles, or these particles are collided with each other, resulting in the creation of new exotic particles. Physics phenomena of interest, however, occur very rarely despite the enormous number of collisions. In analyzing such experimental data, data science techniques are applied to efficiently and accurately select physical events of interest and to make statistical evaluations of the results. Through the various physics analyses carried out during the workshops, students were able to learn the basics of data science involving both programming languages and machine learning.

Server in the cloud

One challenge when holding data analysis training online is the preparation of an analysis platform that is independent of the students' computer environments. For DSPN2020, a Jupyter server was set up on the Google Cloud platform, providing the students access via a web browser to build a programmable environment. To understand the progress of the students, Slack was also used to post graphs of analysis results in a timeline format.

Days Two through Six of the series combined both lectures and practical training for the high school students. 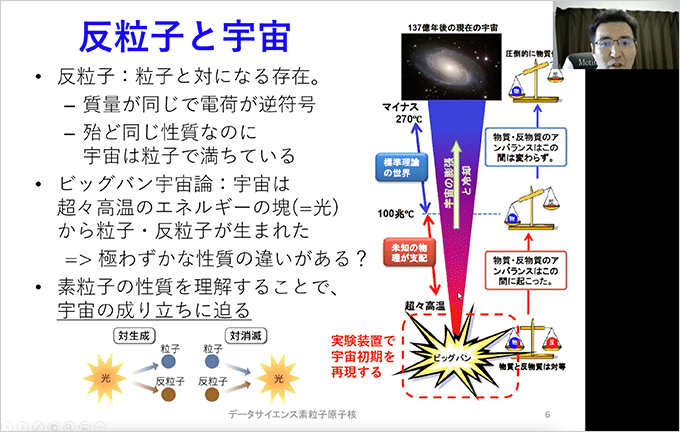 Day Two began with a lecture by Assistant Professor Tomoyuki Konno of Kitasato University, who explained certain aspects of forefront particle physics and the Belle II experiment, currently being commissioned at the High Energy Accelerator Research Organization (KEK) in Tsukuba City, Ibaraki Prefecture, Japan. Students learned about how to seek unknown elementary particles that imply a sign of physics beyond the standard model of particle physics, and the approaches of Belle II in this search for new physics. As an alumnus of Tokyo Tech, Konno also reflected on his research activities as a student. 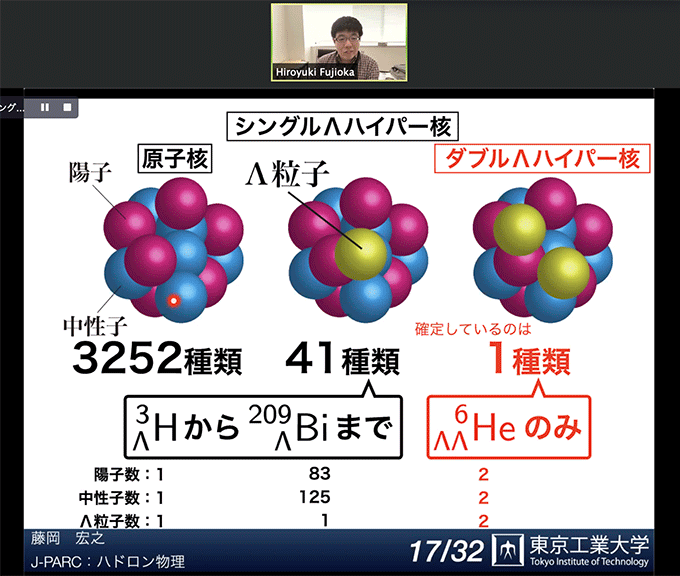 On Day Three, Tokyo Tech Associate Professor Hiroyuki Fujioka spoke to the students about hadron physics and the experiments being conducted at the Japan Proton Accelerator Research Complex (J-PARC) in Tokai Village, Ibaraki Prefecture. Fujioka explained the research being developed to gain a more unified understanding of the two classes of hadrons — baryons, which are made up of three quarks, and mesons, which consists of a quark and an antiquark. He gave particular attention to hadrons with strange (s) quarks which do not exist in nature. 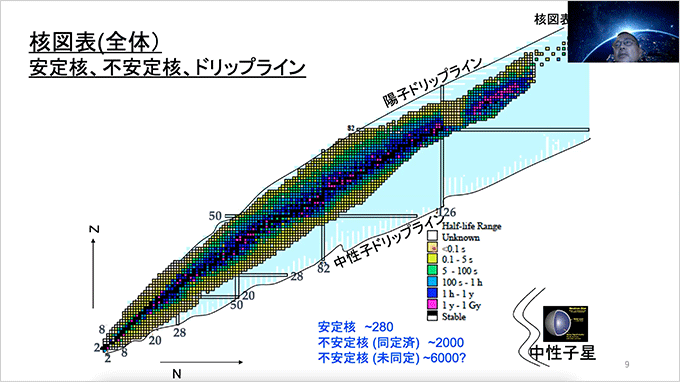 Day Four was all about nuclear physics and unstable nuclei under the guidance of Professor Takashi Nakamura. The Tokyo Tech professor explained that neutron-rich unstable nuclei were deeply involved in nucleosynthesis, the process that followed the Big Bang and formed the current element ratio of the universe. Nakamura also touched on nihonium (Nh), the element discovered in Japan in 2012. 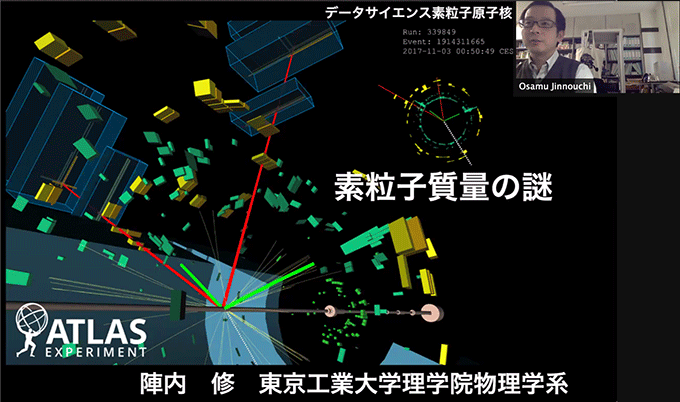 On Day Five of the series, Tokyo Tech Associate Professor Osamu Jinnouchi explained the Higgs mechanism, which gives mass to fundamental particles. He talked about how quarks, leptons, and gauge bosons (Z, W) obtained mass through interaction with the Higgs field, and in particle collision experiments at the Large Hadron Collider. He also showed how the Higgs boson was measured when it was discovered by the ATLAS experiment at the European Organization for Nuclear Research (CERN). 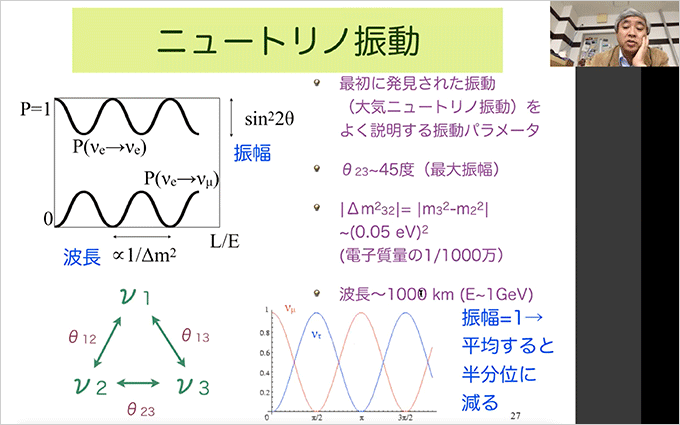 Day Six of the series was spent in the company of Professor Masahiro Kuze and his students from Tokyo Tech. They spoke about neutrino physics, CP violation in the lepton sector, and neutrino measurement experiments such as those conducted at the Super-Kamiokande observatory in Gifu Prefecture. 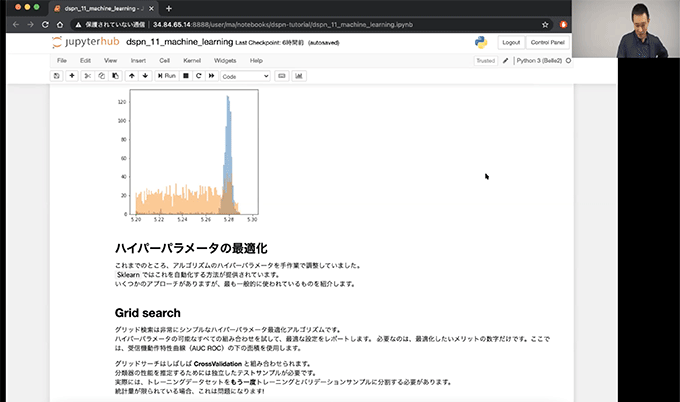 "It's tough, but I want to learn more"

Feedback collected after the six-day series showed that many participants felt the same way — that the topics of elementary particles and nuclear physics were very difficult, but very interesting. Most participants expressed a hunger to learn more.

Tokyo Tech strives to conduct regular educational activities for high school students, and to share and discuss topics from the forefront of science in an open, clear, understandable manner.