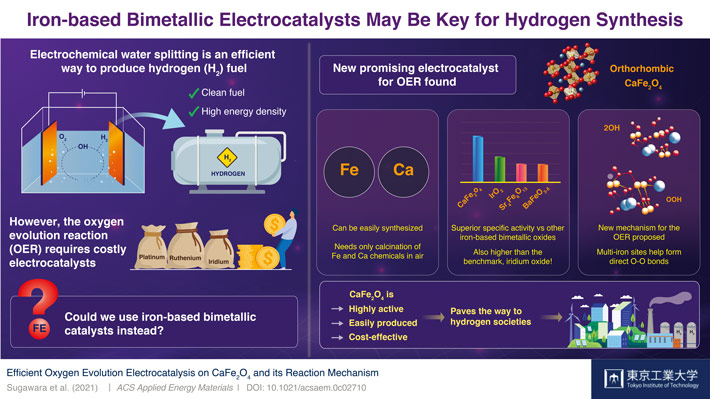 Today, we can say without a shadow of doubt that an alternative to fossil fuels is needed. Fossil fuels are not only non-renewable sources of energy but also among the leading causes of global warming and air pollution. Thus, many scientists worldwide have their hopes placed on what they regard as the fuel of tomorrow: hydrogen (H2). Although H2 is a clean fuel with incredibly high energy density, efficiently generating large amounts of it remains a difficult technical challenge.

Water splitting—the breaking of water molecules—is among the most explored methods to produce H2. While there are many ways to go about it, the best-performing water splitting techniques involve electrocatalysts made from expensive metals, such as platinum, ruthenium, and iridium. The problem lies in that known electrocatalysts made from abundant metals are rather ineffective at the oxygen evolution reaction (OER), the most challenging aspect of the water-splitting process.

In a recent study published in ACS Applied Energy Materials

, a team of scientists at Tokyo Institute of Technology, Japan, found a remarkable electrocatalyst candidate for cost-effective water splitting: calcium iron oxide (CaFe2O4). Whereas iron (Fe) oxides are mediocre at the OER, previous studies had noted that combining it with other metals could boost their performance to actually useful levels. However, as Assistant Professor and lead author Dr Yuuki Sugawara comments, no one had focused on CaFe2O4 as a potential OER electrocatalyst. “We wanted to unveil the potential of CaFe2O4 and elucidate, through comparisons with other iron-based bimetallic oxides, crucial factors that promote its OER activity,” he explains.

To this end, the team tested six kinds of iron-based oxides, including CaFe2O4. They soon found that the OER performance of CaFe2O4 was vastly greater than that of other bimetallic electrocatalysts and even higher than that of iridium oxide, a widely accepted benchmark. Additionally, they tested the durability of this promising material and found that it was remarkably stable; no significant structural nor compositional changes were seen after measurement cycles, and the performance of the CaFe2O4 electrode in the electrochemical cell remained high.

Eager to understand the reason behind the exceptional capabilities of this unexplored electrocatalyst, the scientists carried out calculations using density functional theory and discovered an unconventional catalytic mechanism. It appears that CaFe2O4 offers an energetically favorable pathway for the formation of oxygen bonds, which is a limiting step in the OER. Although more theoretical calculations and experiments will be needed to be sure, the results indicate that the close distance between multiple iron sites plays a key role.

The newly discovered OER electrocatalyst could certainly be a game changer, as Dr Sugawara remarks, “CaFe2O4 has many advantages, from its easy and cost-effective synthesis to its environmental friendliness. We expect it will be a promising OER electrocatalyst for water splitting and that it will open up a new avenue for the development of energy conversion devices.” In addition, the new OER boosting mechanism found in CaFe2O4 could lead to the engineering of other useful catalysts. Let us hope these findings help pave the way to the much-needed hydrogen society of tomorrow!