Novel Fast-Beam-Switching Transceiver Takes 5G to the Next Level

With the recent emergence of innovative technologies, such as the Internet of Things, smart cities, autonomous vehicles, and smart mobility, our world is on the brink of a new age. This stimulates the use of millimeter-wave bands, which have far more signal bandwidth, to accommodate these new ideas. 5G can offer data rates over 10 Gbit/s through the use of these millimeter-waves and multiple-in-multiple-out (MIMO) technology—a technology that employs multiple transmitters and receivers to transfer more data at the same time.

Large-scale phased-array transceivers are crucial for the implementation of these MIMO systems. While MIMO systems boost spectral performance, large-scale phased-array systems face several challenges, such as increased power dissipation and implementation costs. One such critical challenge is latency caused by beam switching time. Beam switching is an important feature that enables the selection of the most optimal beam for each terminal. A design that optimizes beam switching time and device cost is, thus, the need of the hour.

Motivated by this, scientists from Tokyo Institute of Technology and NEC Corporation in Japan collaborated to develop a 28-GHz phased-array transceiver that supports fast beam switching and high-speed data communication. Their findings will be discussed at the 2021 Symposia on VLSI Technology and Circuits, an international conference that explores emerging trends and innovative concepts in semiconductor technology and circuits.

The proposed design facilitates dual-polarized operation, in which data is transmitted simultaneously through horizontal and vertical-polarized waves. However, one issue with these systems is cross-polarization leakage, which results in signal degradation, especially in the millimeter-wave band. The research team delved into the issue and developed a solution. Prof. Kenichi Okada, who led the research team, says, "Fortunately, we were able to devise a cross-polarization detection and cancellation methodology, using which we could suppress the leakages in both transmit and receive mode."

One critical feature of the proposed mechanism is the ability to achieve low-latency beam switching and high-accuracy beam control. Static elements control the building blocks of the mechanism, while on-chip SRAM is used to store the settings for different beams (Figure 1). This mechanism leads to fast beam switching with ultra-low latency being achieved. It also enables fast switching in transmit and receive modes due to the use of separate registers for each mode. 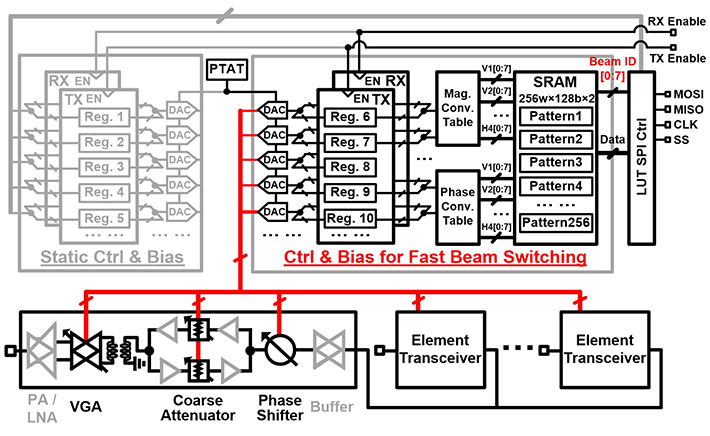 Another aspect of the proposed transceiver is its low cost and small size. The transceiver has a bi-directional architecture, which allows for a smaller chip size of 5 × 4.5 mm2 (Figure 2). For a total of 256-pattern beam settings stored within the on-chip SRAM, a beam switching time of only 4 nanoseconds was achieved! Error vector magnitude (EVM)—a measure to quantify the efficiency of digitally modulated signals such as quadrature amplitude modulation (QAM)—was calculated for the proposed transceiver. The transceiver was supported with EVMs of 5.5% in 64QAM and 3.5% in 256QAM. 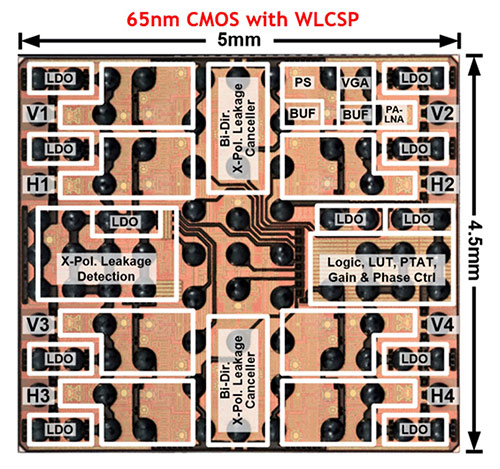 The proposed phased-array transceiver is fabricated using a 65-nm CMOS process and packaged with wafer-level chip-scale package. It is configured in an area as small as 5 × 4.5 mm.

When compared with state-of-the-art 5G phased-array transceivers, the system has a faster beam switching time and excellent MIMO efficiency. Okada is optimistic about the future of the 28-GHz 5G phased-array transceiver. He concludes, "The technology we developed for the 5G NR network supports high-volume data streaming with low latency. Thanks to its rapid beam switching capabilities, it can be used in scenarios where enhanced multi-user perception is required. This device sets the stage for a myriad of applications, including machine connectivity and the construction of smart cities and factories."

This research is supported by the Ministry of Internal Affairs and Communications in Japan (JPJ000254).