Microscopic aspects of ferroelectricity are canonically related to polar atomic displacements that break inversion symmetry of the crystal, leading to a non-zero net electric dipole moment. However, there is a special class of magnetic materials called multiferroics where inversion symmetry breaking occurs by a magnetic order stabilized in an otherwise crystallographically centrosymmetric lattice. The magnetically induced electric polarization can display complex forms of magnetoelectric coupling to the underlying magnetic texture, and its practical realization is one of the key directions towards achieving the cross-control of ferroelectric properties and magnetism in new generation electronic devices. Thus, understanding the microscopic origin of multiferroicity is a foremost goal of both fundamental and practical importance. 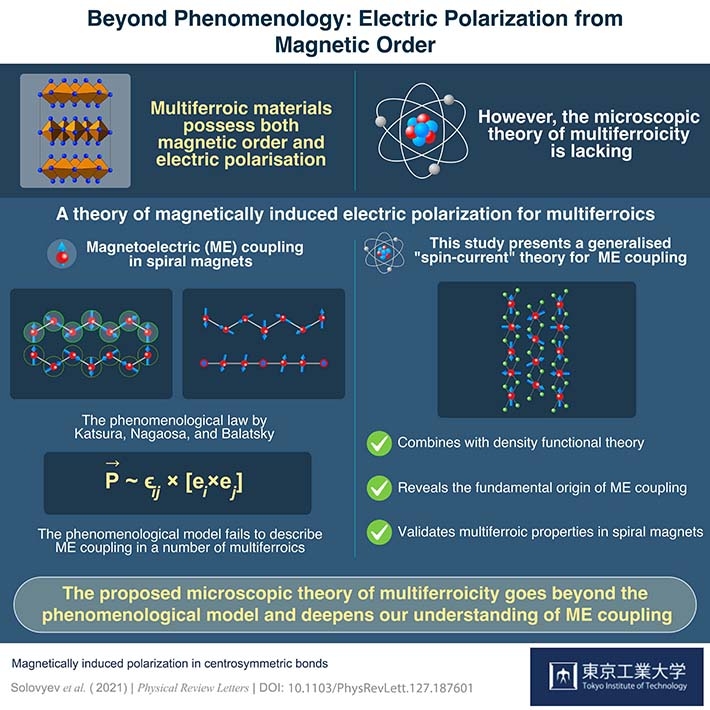 Being proposed almost two decades ago, the phenomenological spin current theory of magnetically induced electric polarization has been a big step advancing our insights about multiferroic activity in spiral magnets. However, this theory remains largely phenomenological and often fails to account for various possible multiferroic scenarios that are realized in real materials, causing in some cases severe misinterpretations of their microscopic origin.

The team of researchers from Tokyo Institute of Technology(Tokyo Tech) collaborated with National Institue for Materials Science and Chiba University resolved the problem related to the emergence of electric polarization in centrosymmetric materials within a much broader theoretical perspective. Starting from the electronic Hubbard model, which captures the essential physics of magnetic insulators, the authors formulated a transparent toy theory for electric polarization uncovering its generic coupling to the material’s magnetic structure. Based on general symmetry arguments, they considered the spin-orbit coupled Kramers pair of electronic states residing at each magnetic site of a single bond and derived an invariant which couples to the spin current and remains finite even when the bond is centrosymmetric, thus permitting finite polarization for noncollinear spins(Figure 1). "Similar to the spin lattice models relating the energy of the system to the directions of magnetic moments, our study shows a rigorous mapping of the electronic model onto the counterpart model for electric polarization, whose properties are eventually dictated by the symmetry of the underlying electronic states", explains Dr. Sergey Nikolaev from Tokyo Tech.

Inversion symmetry I can be broken by a magnetic order inducing electric polarization whose coupling to magnetic moments can have a complex form.

Importantly, the authors showed that the phenomenological spin-current theory, commonly used for the analysis of spiral multiferroics, can be regarded as the special case of a more general spin-current theory proposed in this study and is only correct for certain symmetries of the Kramers states. "We explicitly showed that the material specific symmetry properties can lead to different forms of magnetoelectric coupling, thus providing compelling alternatives for the analysis of multiferroics", says Dr. Igor Solovyev from National Institute for Materials Science.

The main findings of the study were combined with first-principles calculations and applied to a series of spiral magnets in order to demonstrate how the generalized spin-current theory can effectively help to rationalize the properties of multiferroic materials.