Tin selenide (SnSe) is a potential thermoelectric material, but needs complicated synthesis processes to realize a high conversion efficiency in its polycrystal form, which is required for practical applications. Tokyo Tech scientists demonstrate that the simple method of tellurium ion substitution can improve electronic and thermal properties simultaneously, resulting in a 30-fold performance enhancement. This result points to a new way for their practical applications in high-efficiency thermoelectric energy conversion. 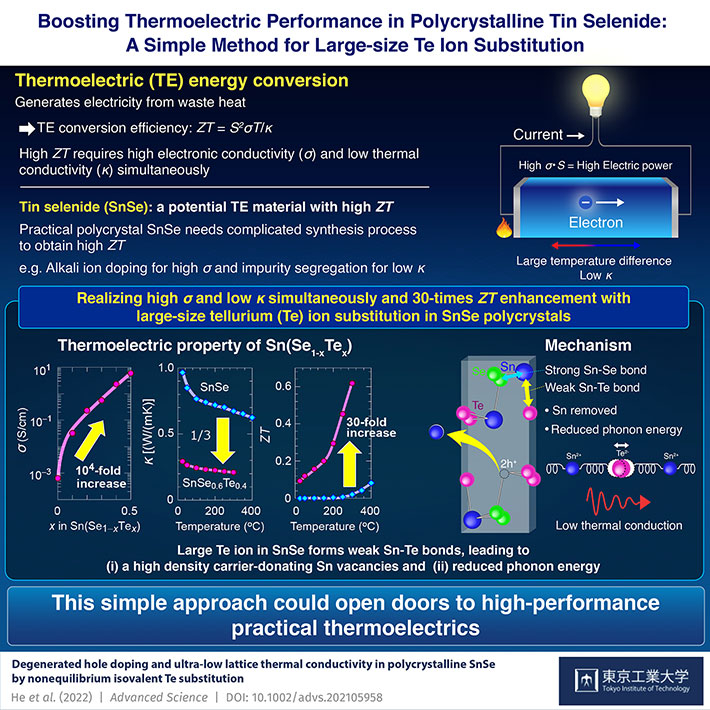 The continued depletion of fossil fuel-based energy resources is leading us towards a growing energy crisis. Consequently, this has set in motion a search for sustainable alternative resources. Thermoelectric energy conversion — a process of generating electricity from waste heat— has gained momentum as the next potential energy harvesting technology. Generators made up of thermoelectric materials are used to harvest thermal energy via the "Seebeck effect." The temperature difference in the thermoelectric material creates a flow of charge carriers, generating electrical energy.

For efficient conversion, a thermoelectric material must have a high conversion efficiency (ZT), which needs a high Seebeck coefficient (S), a high electronic conductivity (σ), and a low thermal conductivity (κ). The material tin selenide (SnSe) is known to exhibit a record high ZT in its single crystal form. However, the performance deteriorates in practical polycrystals because of a low σ and a high κ.

In a recent study published in Advanced Science, a team of researchers from Japan, led by Associate Professor Takayoshi Katase from Tokyo Institute of Technology (Tokyo Tech) managed to enhance the ZT of polycrystalline SnSe by demonstrating a high σ and a low κ simultaneously. The team achieved this remarkable breakthrough by introducing tellurium (Te) ion into the structure of SnSe.

There was a catch, however. The solubility of Te2– ions in the Se2– site of SnSe is extremely low under thermal equilibrium due to a size mismatch between the two ions, which severely limits the ion substitution. The team tackled this challenge by adopting a two-step non-equilibrium growth process, which allowed them to increase the Te2– concentration limit x up to 0.4 in Sn(Se1-xTex) bulk crystals.

"Adding an ion of the same valence state usually do not increase the carrier concentration in ionic semiconductors. However, in our case, substituting Te2– ions at the Se2– site in SnSe increased the carrier concentration by three orders of magnitude, leading to a high σ. In addition, the Te ion substitution drastically reduced κ to less than one-third its value at room temperature," says Dr. Katase.

There have been two major strategies to accomplish the high σ and low κ in SnSe polycrystals. One is adding ions with a different valence state, such as alkali ions, to increase carrier concentration. Another one is controlling the impurity segregation for phonon scattering. Thus, a lot of complications are involved in the synthesis of high performance polycrystalline SnSe.

The team, however, showed that isovalent Te ion substitution increases σ and reduces κ, simultaneously. How? The team carried out first-principles calculations to elucidate the mechanism underlying the improvement in ZT. The calculations showed that the large Te ion in SnSe formed weak Sn-Te bonds. This Sn-Te bond is easily dissociated and a high density of Sn vacancies is formed in the structure, leading to a high hole concentration. In addition, the weak Sn-Te bonds reduces the phonon frequency (frequency of lattice vibration) and enhances the phonon scattering, resulting in the low κ.

The study, thus, presents a new method for adding large-sized ions beyond their equilibrium limits, which could guide future studies on optimizing the electronic and thermal properties of thermoelectric SnSe polycrystals. "We believe that our findings would pave the way to high-performance, practical thermoelectric materials," says Dr. Katase.

We certainly hope his vision is not too far from being realized!