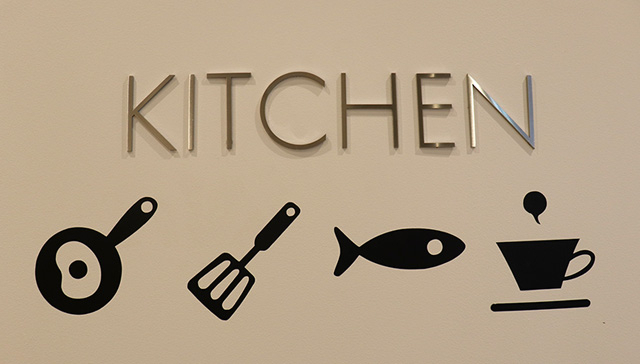 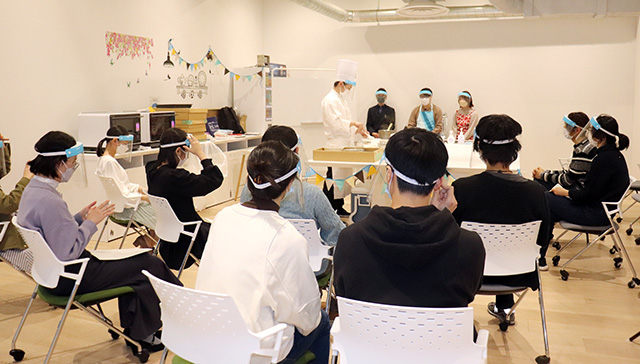 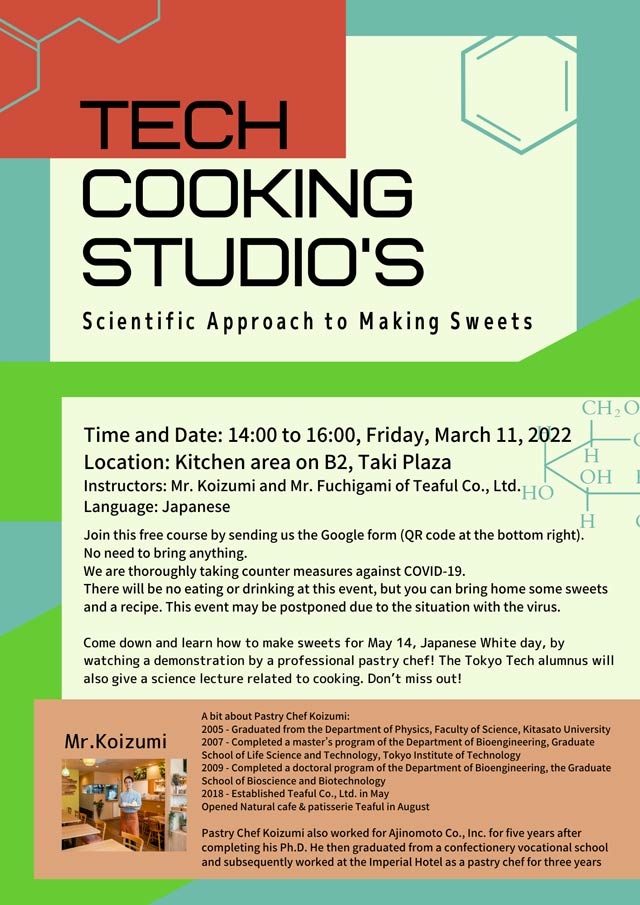 Focused on the science of baking, this event was supported by Gurunavi Inc. Chairman and Director Hisao Taki, a Tokyo Tech alumnus, and was organized as part of the Student Success Support Project. TECH Cooking Studio, the fourth and final session of the project, was held at Taki Plaza's B2F kitchen space. Originally planned as an event where international students would cook a hot-pot dish from their home country or region and share it with fellow students, the plans had to be changed due to restrictions caused by the continuing pandemic. After thorough discussions among project organizers, the theme of the event was altered while attempting to maintain a topic that would be unique to Tokyo Tech. The result was a science-based cooking studio where a guest patissier demonstrated the art of baking and sweet-making, while a Tokyo Tech alumnus explained the preparation processes using chemical formulas and other science-based clarifications.

This event was led by two special guests — Naoya Koizumi, a doctoral graduate from Tokyo Tech's Department of Bioengineering at the former Graduate School of Bioscience and Biotechnology who now operates Teaful co., Ltd, a café and patisserie in the Ookayama area, and Kazuaki Fuchigami, a patissier who works with Koizumi. During the baking studio, Fuchigami provided sweet-making demonstrations, while Koizumi shared scientific explanations of the cooking methods on a whiteboard. Acting as moderators during the event were Yoshiki Fukuda, a 1st-year master's student in Chemistry, and Risako Yanagase, a 2nd-year student in Transdisciplinary Science and Engineering and leader of the Taki Plaza Gardeners (TPGs), the student group in charge of planning and managing activities at Taki Plaza. 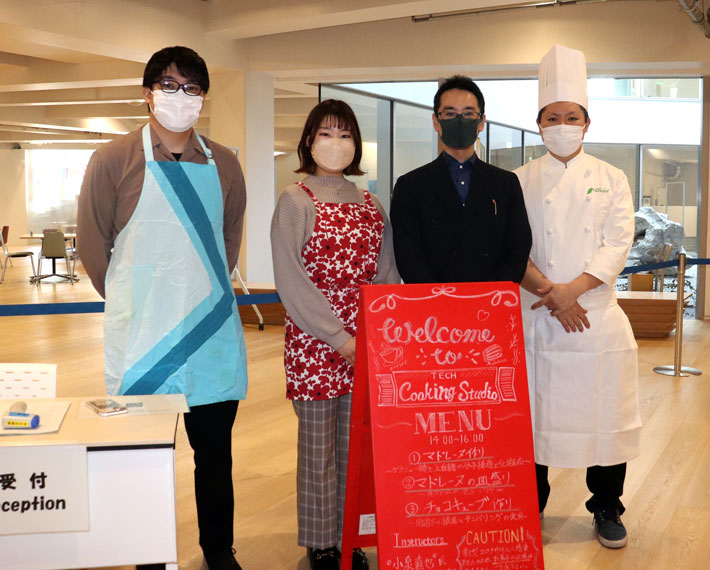 To ensure the safety of all those present, the event was limited to 20 participants who were required to register in advance. Each participant was asked to measure their body temperature and disinfect their hands at the reception, wear masks and face shields, refrain from eating or drinking, and remain seated in the kitchen space during the event.

Once all the preparations had been completed, it was time to introduce the menu — madeleines and chocolate cubes made from scratch, all presented together as a beautiful dessert plate.

Patissier Fuchigami kicked things off by whipping up two types of madeleines — one made with granulated sugar, the other with caster sugar.

While the madeleines were baking in the oven, Koizumi explained the difference in molecular structure and chemical reactions between granulated and caster sugar. The participants listened intently, nodding their heads and taking notes during this unique approach to baking. 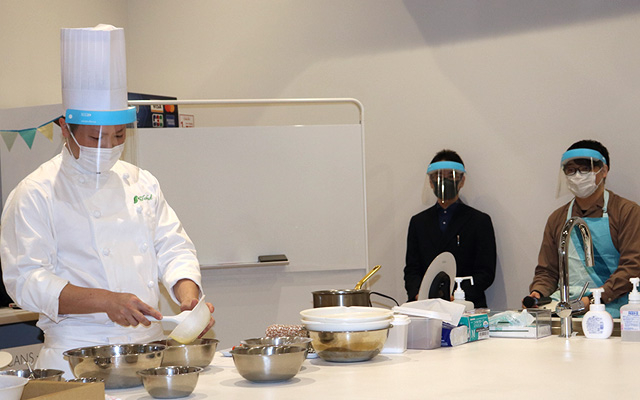 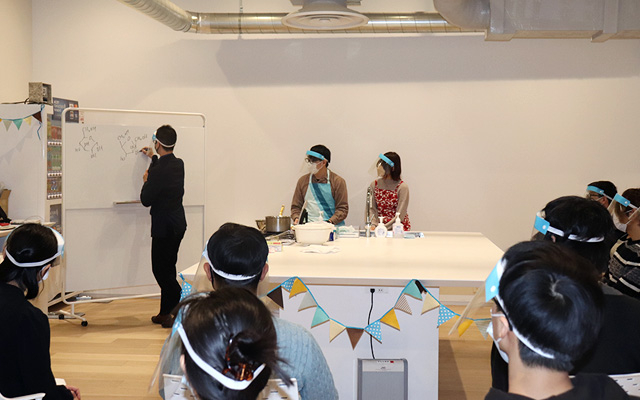 During the explanations, patissier Fuchigami clarified some points on the sugar used. "Caster sugar is considered a carefully refined, high-quality, expensive sugar across the world. It is quite rare to see it used in the making of sweets, but patissiers in Japan often do so."

Once the baked madeleines were ready, Fuchigami showed the students how a professional patissier plates desserts. He topped the madeleines with a laboriously prepared whipped cream, some fruit, and cocoa powder. While the whipped cream was being prepared, Koizumi again chipped in with a scientific explanation for how cream turns from a liquid into a solid.

Chocolate cubes were the final item on the menu. While Fuchigami demonstrated how to make delicious yet simple cubes from granola available at many nearby stores, Koizumi gave a brief overview of the fat composition and tempering of chocolate. Participants found the explanation about the crystal structure of chocolate particularly interesting. Once the cubes had chilled, they were placed onto the plate of madeleines, completing the today's dessert menu. 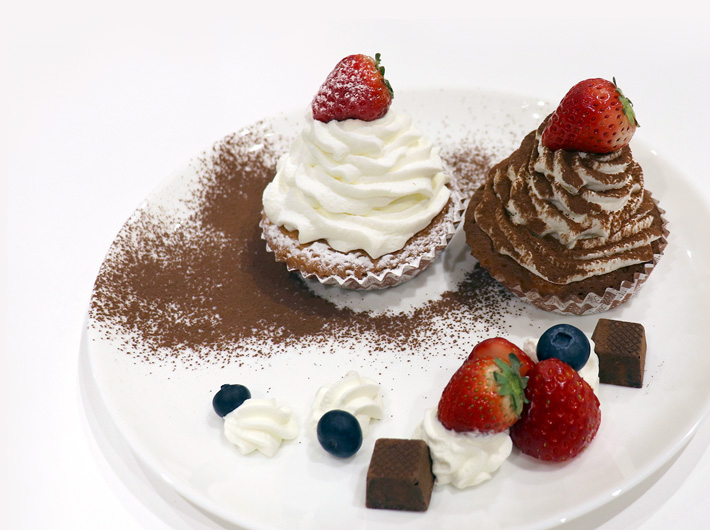 To wrap things up, Koizumi and Fuchigami answered a wide a variety of baking-related questions that the students had prepared beforehand. After some closing remarks from moderator Yanagase, each participant received a bag of madeleines — made with caster sugar, granulated sugar, and a secret recipe — and chocolate cubes to enjoy afterwards, together with the recipe for the goodies created during the session.

The popularity of this event came as a great surprise to all the organizers. All 20 places were reserved one hour after applications opened, and all the students said they would participate again, should the opportunity arise. Based on this feedback, organizers are planning to make TECH Cooking Studio as a regular Taki Plaza event in the future.