Study-Abroad Fair 2022—From Tokyo Tech into the World: The Path to Becoming an Expert in Two Fields 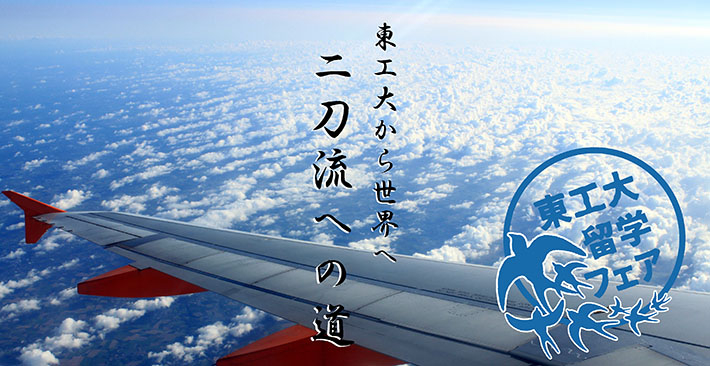 On May 20, Tokyo Institute of Technology held an event themed "From Tokyo Tech into the World: The Path to Becoming an Expert in Two Fields". This hybrid lecture, attended via Zoom as well as in person at the lecture theatre, aimed at promoting study-abroad programs.

The annual events theme in the 2022 academic year places emphasis on the Institute’s hopes that Tokyo Tech students will become experts not only in science and engineering fields, but also in various other fields by gaining international experience and studying abroad. With this in mind, Tokyo Tech faculty, including Institute Professor Akira Ikegami of the Institute of Liberal Arts, current students, and alumni gave lectures.

Dive into a diverse environment!

First, Vice President for International Affairs Nobuhiro Hayashi gave a presentation about the Institute's international education in which he introduced various types of support for those studying abroad.

Next, Institute Professor Ikegami talked about his own experiences abroad when visiting over 80 countries, including his visit to MIT (Massachusetts Institute of Technology in the US). "There are many things in the world that you can't understand until you come face to face with them, and I realized that putting yourself into a diverse group of people and being exposed to different cultures leads to innovation," he said. He also urged students not to worry about their language skills, as the most important thing is what you talk about. "If you are a Tokyo Tech student, that means you already have your area of expertise that you can talk about as well as the ambition to keep learning; there is no need to be worried about languages. Work hard and be well prepared, but also cherish the excitement of being outside of Japan." He also emphasized that it is much more important to spend energy on efforts when in difficult circumstances, rather than wasting it on worries before a problem even exists, and to have confidence in all that one does.

Eri Ota, Specially Appointed Professor of the Center for International Education, introduced the curriculum of Tokyo Tech's educational program, Global Scientists and Engineers Course (GSEC), and said that students can be active globally by deepening their knowledge in their specialized fields with the dual approach of "internationality" gained through this program and "expertise" acquired through Tokyo Tech's education. 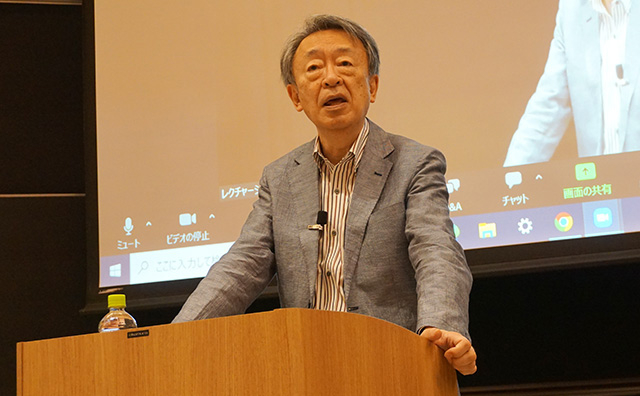 Professor Ota talked about GSEC while showing a picture of Musashi Miyamoto, a historical swordsman famous for his two-fisted swordsmanship.

After a five-minute break, the second half of the program featured current students and graduates.

Saki Sakurai, a second-year master's student of the Department of Life Science and Technology, School of Life Science and Technology, shared that her short-term language study-abroad experience during her bachelor's program at University of Washington and her long-term study-abroad experience during her master's program at Swiss Federal Institute of Technology Zurich helped her to realize that there are many options in life. 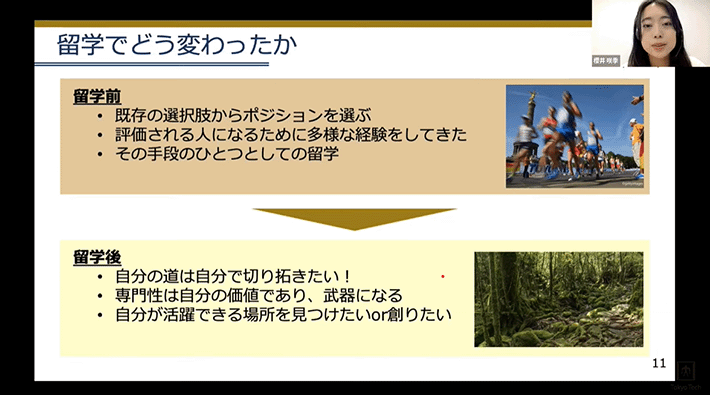 Sakurai said that her study-abroad experience changed the way she thinks about her future. 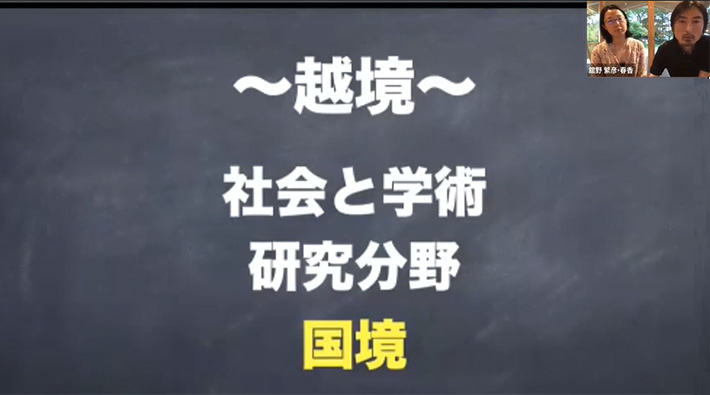 Haruka and Shigehiko Tateno talked about their experiences in "crossing lines in three ways".

Finally, a small talk on study abroad was given by members of FLAP, a student organization at Tokyo Tech that promotes studying abroad, in which two of its members shared their own study-abroad experiences on topics chosen by participants' real time votes.

Vice President Hayashi, who took the stage again for the closing session, said, "Tokyo Tech has a full range of programs and support for studying abroad. It is up to you to decide which program to choose, where to study, and what to do." 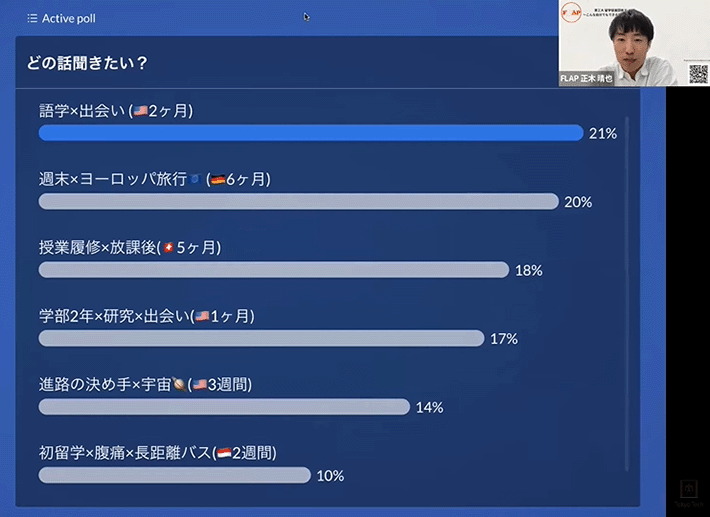 The top two talk themes were selected by real-time vote.

In a survey after the event, positive comments were found such as "I am more interested in studying abroad now than I was before attending the event," "I no longer feel anxious about languages," and "I want to try a short-term study-abroad program while I am still an undergraduate student."

In the following week, people in charge of 11 study-abroad programs offered by Tokyo Tech and an outside internship program gathered on Zoom for a program information session. Approximately 100 students freely moved in and out of each program's breakout room, eagerly listening to the details of the programs they were interested in and to the talks by those who had experience in those programs.

Tokyo Tech offers a wide variety of study-abroad programs and plans to hold information sessions and events on various themes in the future.