Taki Plaza special lecture: Utilizing a love for Tokyo to create the future

"Tokyo's secret charms revealed through excessive love," a Taki Plaza special lecture, was held at Hisako & and Hiroko Taki Plaza (Taki Plaza) on Ookayama Campus on May 18. The event brought together six cultural figures active on the world stage to discuss Tokyo from the perspective of eclecticism and affection while attempting to uncover the hidden charms of the city and its vision for the future. Sixty-seven students were present to listen to the discussions. 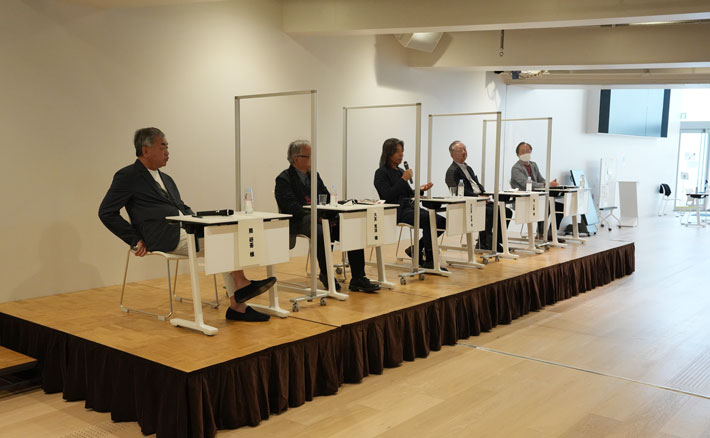 This lecture was planned and co-sponsored by Hisao Taki, chairman and founder of Gurunavi Inc. and NKB Inc. Taki, an alumnus of Tokyo Tech, is also the main donor that led to the creation of Taki Plaza, the new student exchange hub at the Institute.

Tokyo Tech President Kazuya Masu, who kicked off the event with some opening words, emphasized that Taki Plaza was created as a "place to create the future," a place where students can actively discuss a better tomorrow with counterparts from diverse backgrounds. Learning from these globally-minded speakers while at this special venue will surely be a meaningful experience, Masu commented. 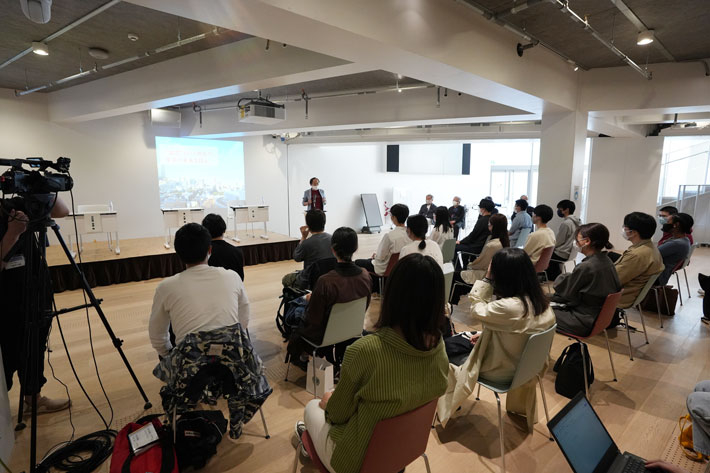 After Masu's greeting, Taki explained "Excessive love for Tokyo," a project that aims to make Japan's capital the top tourism city in the world, and which has attracted Taki's interest for years. In today's society, where information is a mixture of thread and thrum, particularly on social network services, it is particularly important to have a system for updating firsthand information. To do this, we need to establish and follow rules for information sharing by using real names and confirming trustworthy sources, Taki explained. The Tokyo Tech alumnus proposed better use of Tokyo's innumerable local shopping districts to take advantage of the city's functionality, and to provide improved accessibility for all, including the elderly. Reliability of information can also be enhanced by utilizing the eclectic knowledge of Tokyo's diverse communities, whether it stems from an affinity for the city's countless manholes or infinite utility poles, Taki mused.

Joining Taki in the discussion on the wonders of Tokyo were architect Kengo Kuma from Kengo Kuma and Associates, the head designer of Taki Plaza, manga artist and film director Katsuhiro Otomo, the creator of Taki Plaza's central piece of public art, President Katsuhiko Hibino from the Tokyo University of the Arts, and President Masu from Tokyo Tech. Institute for Liberal Arts Professor Hiroichi Yanase was also present, acting as moderator. 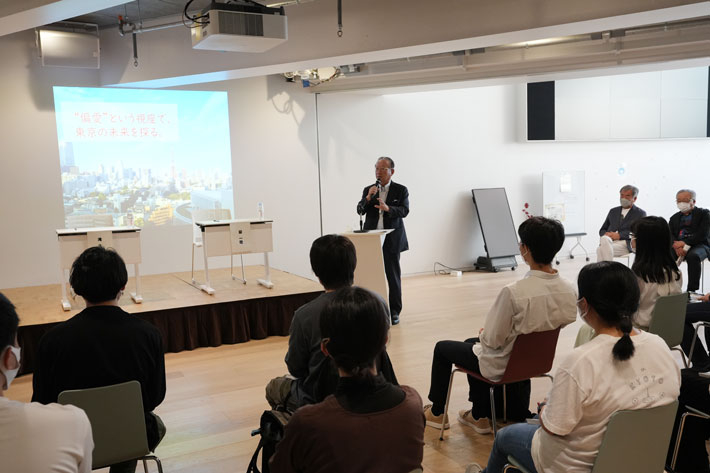 Taki explaining his thoughts on "Excessive love for Tokyo" 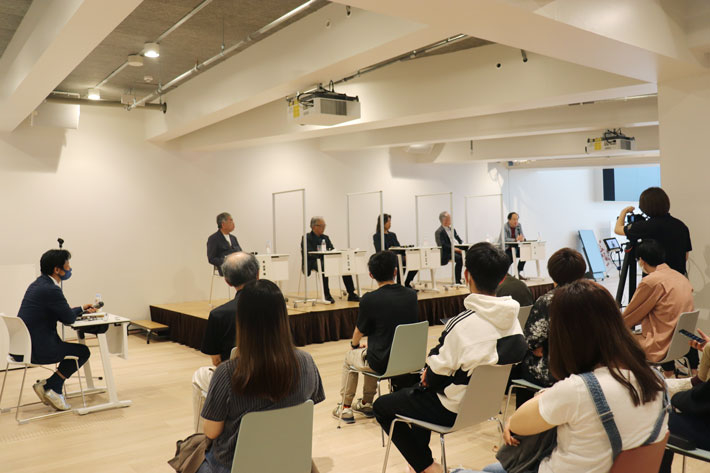 Take adventures to create the future

Manga artist and film director Otomo is the creator ELEMENTS OF FUTURE, a large ceramic wall mural on the first floor of Taki Plaza. The artist is also the writer and illustrator of AKIRA, an internationally acclaimed cyberpunk manga series.

When asked how he predicted the postponement of the Tokyo 2020 Olympics in his AKIRA plot over 30 years ago, Otomo replied, "It was just a coincidence. Neo-Tokyo, the setting for the story, was based loosely on Tokyo in the 1960s, and I did not really anticipate the future. The fact that it actually ended up matching the present day quite accurately was peculiar, but I am glad it was not my fault!" Otomo's frank answer drew plenty of laughter from the audience.

Regarding ELEMENTS OF FUTURE, Otomo continued, "I created this work because I believe that human beings and cities will make the future, and that humans will continue to create an abundance of new science and culture. At times I feel that young people don't create new things or have adventures because they are afraid of failure. I want them to do just that, try new things and take more adventures." 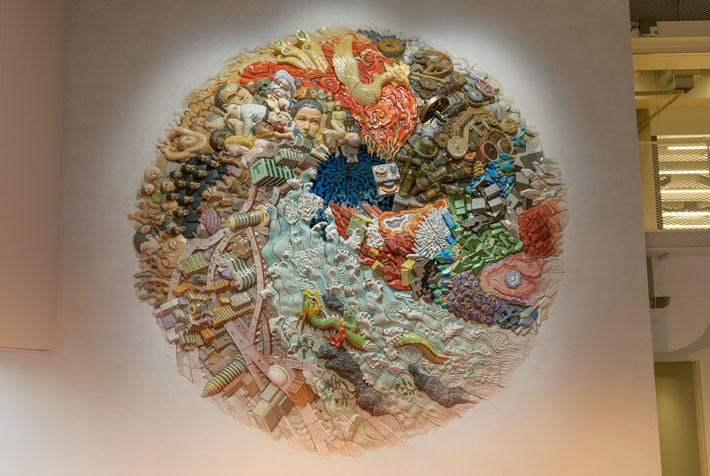 ELEMENTS OF FUTURE: 5 m in diameter with roughly 500 ceramic components

Kuma, who designed the Japan National Stadium for the Tokyo 2020 Olympics, offered his thoughts on Japan's strengths. "The concrete stadium built for the 1964 Olympics dominated the landscape in the Shibuya area of Tokyo, which back then was full of wooden structures, so the transformation of Tokyo was very interesting. When it was decided that a stadium would be built for the 2020 Olympics, we thought of using wood, since concrete was the focus in 1964," he explained.

Kuma also noted that Tokyo's special ability to love the small details is something that creates appeal around the world. "On the global scene, competing via larger concepts may not be suitable for us as the decision-making system is just too complicated. On the other hand, I believe that we can show our unique talents through these intricate 'alleys' that connect small details and human networks," Kuma explained.

Connection between Tokyo and its diverse people

Hibino offered his ideas from the perspective of the arts. "To shift gears, sometimes I just go to the vibrant streets of Tokyo alone and look at the city. For me, the hustle and bustle of strangers passing by is the most 'Tokyo' of all. In art, being different is appealing. I am who I am because I am different from those around me. Accepting the signs of others who are different from you is one characteristic of art, and this creates diversity," Hibino commented.

The Tokyo University of the Arts president also believes that Tokyo's strength lies in its accessibility. "This city allows people to go anywhere on foot, whether they are a wheelchair user or an elderly individual with disabilities."

Hibino added, "Art has as many values as there are people. Like a communicator connecting art with its viewers, this project connects the city of Tokyo with its people."

"As President Hibino mentioned, Tokyo is home to an immense amount of people," President Masu commented. "I think that in a city where this many people gather, I have been able to share with others my research and the questions I have in my daily life, and to experience a sense of mutual empathy. The opportunity to meet a wide variety of people at Tokyo Tech, and to share and empathize with these people, has brought me great satisfaction. I think the "Tokyo" that encapsulates "Tokyo Tech" has led me to this sharing and empathy."

Masu also pointed out that, unlike around the time of the 1964 Olympics, he feels there is now a stronger awareness of technology, society, and Tokyo itself all working together to create better lives. People are no longer simply looking to improve the quality of existing products. Instead, they are taking a broader view to examine how and what these products are used for, and have a stronger desire to make technology that is truly useful to the world.

Masu also offered direct words of encouragement to the students present at the event. "When I was a bachelor's program student, I focused on physical electronics, and therefore I was interested in the symmetry of electrical circuits. When I succeeded in creating wonderfully symmetrical experimental devices, I experienced a real love, a true affection for my research. The basic CMOS circuit, discovered in 1968, was symmetrical, and I have been researching integrated circuits that could exceed this symmetry to this day, but I have not yet succeeded. I believe that if we look at the city of Tokyo with the same kind of dedication, the same kind of 'excessive love' that have for our research, then we will again discover something truly unique." 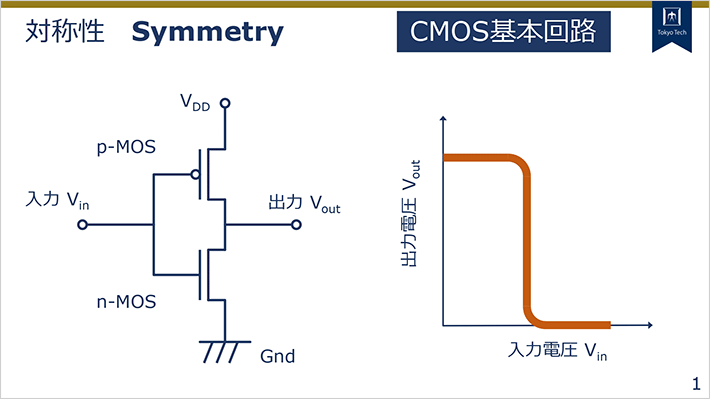 To close the event, Tokyo Tech Executive Vice President for Education Jun-ichi Imura offered the participants and students his thoughts. "After listening to today's discussions, I have enhanced my understanding on the eclecticism, the affection that Tokyo generates — the connection of fine details, the changing environment, and the value that diversity creates. I am sure that the students here today were able to broaden their perspectives. I hope you can project this shared awareness onto a blank canvas on which you paint your own unique thoughts. I also hope that the students sitting in the audience today will one day make up our future panel of speakers." 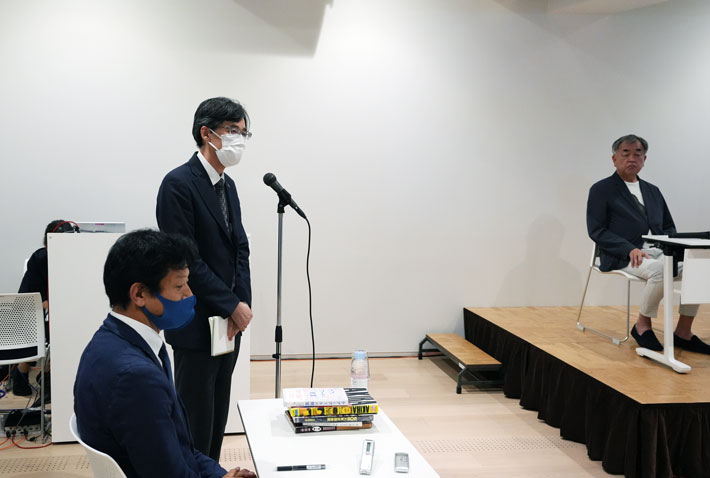 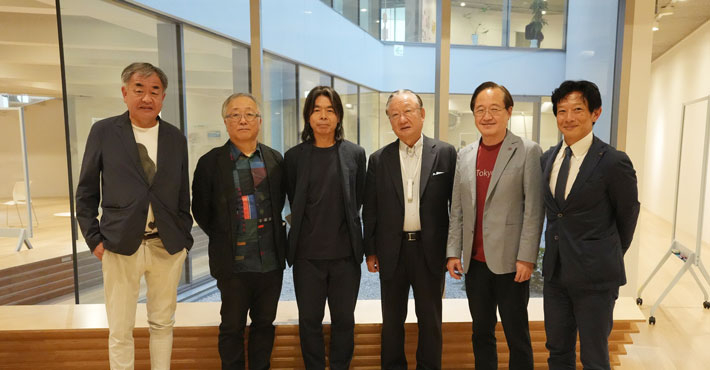