Three Tokyo Tech young researchers were awarded the 2022 Suematsu Digital Technology Award and a ceremony was held on September 1.

The Suematsu Digital Technology Award was established in 2018 to provide a broad range of support for young researchers and their work in areas such as computers, robotics, networks, and the application of digital technology. 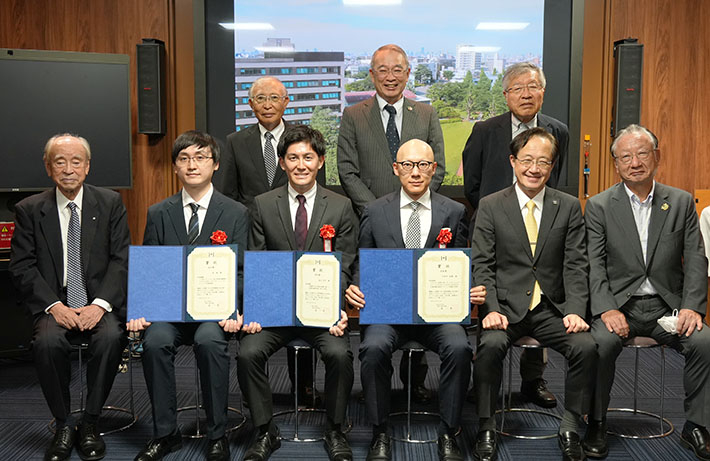 As a non-invasive technique, the radio wave has been widely studied for medical usages such as abnormal tissue detection and bio-imaging. However, the used frequencies mainly concentrate on several GHz which limit the resolution of the measurement. Recently, the development of communication technologies with mmWave and THz-wave has evolved rapidly. Meanwhile, since the wavelength is short, it is promising to be utilized to realize high-resolution imaging. In this research, the mmWave and THz-wave propagation inside the human will be comprehensively analyzed and the emerging machine learning technologies will be exploited to figure out the relationship between internal structure and wave propagation characteristics. Then, algorithms will be developed to reconstruct the sub-surface structure with high accuracy. In the future, this research aims at developing the fundamental technology for high-resolution sub-surface imaging towards biomedical application.

Research Topic: A study on low-latency logical circuit based on optical likelihood calculation

Today's digital society has been supported by electrical circuits made of complementary metal oxide semiconductor (CMOS). However, as circuits become smaller, processing delays increase, which is a major problem. To solve this problem, there is an effort to introduce optical signal processing in electrical circuits. This approach is expected to improve processing delay as the size of the circuits become smaller, since the processing is completed as light signal propagates through the circuit. Based on the background, the author has been engaged in research on optical likelihood calculations and has succeeded in realizing its operation. This research applies the calculation technology to logic circuit. In particular, the author approaches the input-output relationship of the circuit as likelihood calculation. This will enable optics and electrons to share processing in a suitable manner and is expected to open the way to lower latency digital technology.

Digital electronics based on silicon (Si) semiconductors is the fundamentals of modern society, and further development is necessary in the future. However, miniaturization of semiconductor device, which is the guiding principle of performance improvement, has reached its essential limit. Once miniaturization is completed, performance will improve by only 3% per year. Furthermore, a significant increase in the energy consumption of semiconductor devices due to a rapid increase in the amount of information communication is an urgent issue on a global scale. Therefore, tungsten diselenide (WSe2), which has no dangling bonds and exhibits high mobility of electrons and holes exceeding that of Si even with a single molecular layer and ambipolar conduction, has attracted much attention as a semiconductor to replace Si. The purpose of this study is to establish the device technology of WSe2 CMOSFET and to realize digital electronics with high energy efficiency by ultra-low voltage operation. By independently establishing source/drain technology with alloy and compound metals and self-aligned gate stack technology, a CMOS inverter gain of 15 at low voltage 0.5V operation will be demonstrated.

At the ceremony to present the recipients with their award notices, the researchers gave presentations on their respective research topics. This was followed by Q&A and words of encouragement from Honorary Professor Suematsu and other attendees.

About the Suematsu Award "Fundamentals and Developments of Digital Technology"

Former Tokyo Tech President and Honorary Professor Yasuharu Suematsu was awarded the Japan Prize in 2014 for his contributions to the development of high-capacity, long-distance optical fiber communications through his research at the Institute, particularly his groundbreaking research related to dynamic single-mode lasers. He donated a portion of the prize money to Tokyo Tech in hopes of encouraging young scientists and engineers to pursue research in diverse fields, develop new technology systems, and delve into the unexplored domains of science.

Suematsu hopes to create a rising tide of activities that will reveal the now-hidden shape of the future. The Tokyo Institute of Technology Fund created the Suematsu Fund to promote research in line with Suematsu's wishes. President and Representative Director Hisao Taki of Gurunavi Inc., a Tokyo Tech alumnus and supporter of the Tokyo Institute of Technology Fund since its inception, also donated a significant additional sum, making the creation of this award possible.

This activity is supported by Tokyo Tech Fund