It features a silicon bridge interconnection structure via a fine "MicroPillar" for broadband communication between chips and a manufacturing process called "All Chip-last." The structure and the process provide the requirements for chiplet integration in the simplest form. This technology is expected to accelerate the evolution of future semiconductor integrated circuit system technology, replacing miniaturization, which is predicted to slow down.

This research was conducted jointly with Aoi Electronics Co., Ltd. and four other companies ahead of the Chiplet Integration Platform Consortium (described later) to be established on October 1. Detailed results will be presented at the international conference IMAPS 2022, which will be held in Boston, USA, starting October 3 (Monday) at 10 p.m. (Japan time).

Since their invention in the middle of the 20th century, semiconductor integrated circuits have become the driving force behind the world's digital transformation thanks to Moore's Law, which improves performance, reduces power consumption, and lowers costs through device miniaturization and improved integration. However, in recent years, the size of semiconductor circuits has been miniaturized to several nanometers. Due to the physical limitations imposed by the size of the atoms that make up a semiconductor, industry now recognizes the law's demise.

Meanwhile, chiplet integration technology (Fig. 1) is in the spotlight as a new evolutionary path to scale up integration and improve performance/reduce power consumption in place of miniaturization. This consists of assembling major systems from a collection of integrated circuit chips that are more tightly coupled than in conventional semiconductor packaging technology. This goes beyond the physical/manufacturing technology dimensions of semiconductor wafers and chips and integrates different functions and structures on a large scale. This makes it possible to provide improved performance through heterogeneous integration and integration scalability, which were not achieved with conventional semiconductor integrated circuit technology. 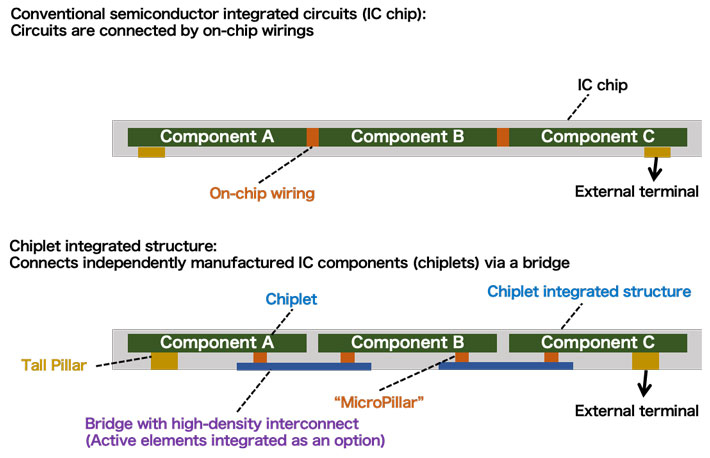 In view of the above background and challenges, we devised Pillar-Suspended Bridge (PSB) technology as a chiplet integrated structure/process with simplest scheme, and made a proof-of-concept prototype to prove its feasibility. Figures 1 and 2 show a PSB bridge connection structure. Only a pillar-shaped metal called a "MicroPillar" is interposed at the connection between the chiplet and the silicon bridge. The chiplets are sealed with mold resin together with the bridge, and is connected to an external electrode by a "Tall Pillar" penetrating the mold on the silicon bridge side. This structure makes it possible to improve the inter-chip connection density and electrical properties by minimizing the chiplet/bridge interconnect element, and to improve the high-frequency properties of the external connection wiring and heat dissipation performance. Another advantage it has is that the type of bridge wiring can be selected, there is no yield problem when scaling up integration (Known Good Bridge), and the size and manufacturing units of the integrated module can be expanded to large panels. This structure was created by (1) high bonding accuracy and reducing "die shift" (phenomenon in which the chip moves during mold sealing) during the manufacturing process with the All Chip-last process, and (2) a bonding process with matching linear expansion (Coefficient of Thermal Expansion: CTE). 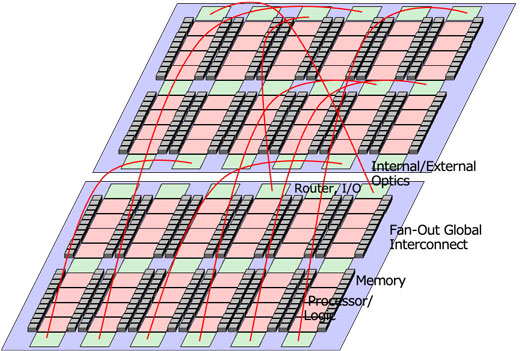 While the miniaturization of semiconductor integrated circuits is expected to slow down due to Moore's law, chiplet integration technology will likely be a new evolutionary path for improving system performance. This platform technology is expected to have a large effect on human society in the long term, and the emergence of a huge industry accompanying it. This technology and its component technologies and applications are expected to contribute to these trends.

In addition, we will establish the Chiplet Integration Platform Consortium on October 1, 2022 for the purpose of research and development in the value chain from manufacturing technology and element technology to applications and its industrialization, targeting chiplet integration platform technology in general, including this research. Along with Tokyo Tech, the main consortium members are Osaka University (Specially Appointed Professor and Professor Emeritus Katsuaki Suganuma) and Tohoku University (Associate Professor Takafumi Fukushima), and 32 companies are scheduled to participate (as of September 2022). It covers research on chiplet integration platform technology in general, including 3D integration technology and optical integration technology.