Using Carbon-Carbon Clumping to Detect the Signature of Biotic Hydrocarbons

The mystery of the origin of hydrocarbons found in extraterrestrial environment may finally be resolved, thanks to a technique developed by researchers at Tokyo Tech based on a 13C-13C abundance analysis. By measuring the abundance of clumped 13C-13C isotope in the hydrocarbons, it can be inferred if a hydrocarbon was produced via biological processes. This could open doors to distinguishing such hydrocarbons from abiotic ones, aiding our search for extra-terrestrial life. 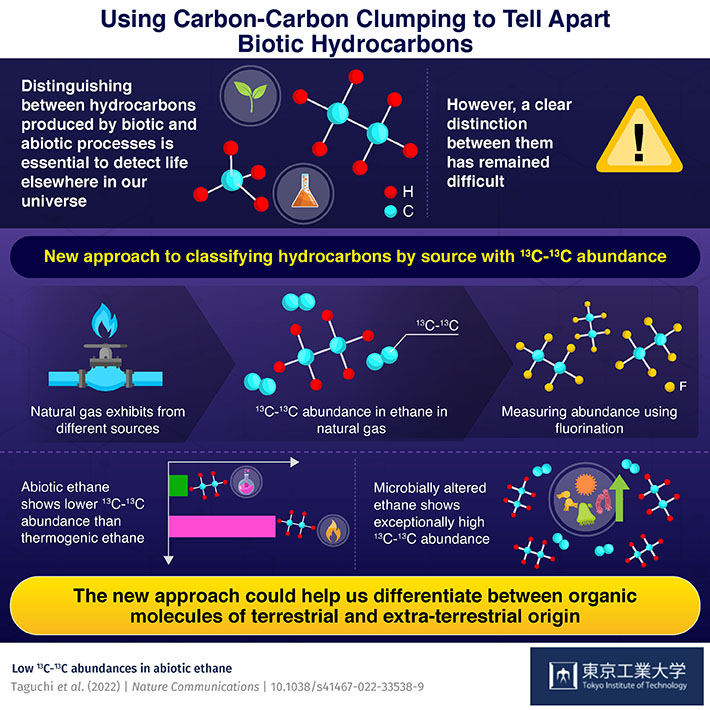 An important signature of life is the existence of organic molecules that have originated from biological processes. The most common organic molecule found in all life forms are hydrocarbons. However, they need not be of biotic origin, i.e., produced from thermal decomposition of sedimentary organic matter or microbes. So, while hydrocarbons have been found in several places outside Earth, they are not necessarily indicative of extra-terrestrial life. These hydrocarbons could well have formed from abiotic, or non-biological processes. Therefore, finding out whether a hydrocarbon is of biotic or abiotic origin is key to inferring the existence of life. Unfortunately, this has proved to be tremendously challenging task so far.

Luckily, a team of researchers led by Professor Yuichiro Ueno from Tokyo Institute of Technology (Tokyo Tech) has now risen to the occasion. The team reports a novel and robust approach to distinguishing the sources of hydrocarbons by looking at the relative abundance of an isotope of carbon, namely 13C-13C, in organic molecules. Talking about their research, published in Nature Communications, Professor Ueno comments, "While methods to distinguish the source of the hydrocarbon, such as compound-specific isotope analysis, are available, they require a whole set of molecules, all of which are not always available to sample. In contrast, our method allows us to use the information contained in the molecule to find the source of its origin."

"This new approach can help us identify the origin of organic molecules, both on earth and in extraterrestrial environments. It can easily differentiate between thermogenic, abiotic, and microbially produced hydrocarbons," highlights Professor Ueno. "While more interlaboratory work needs to be done for further calibration of the method, we believe it can potentially help detect the signatures of life elsewhere the universe."

And we're excited to find out!