Tokyo Tech Academy for Leadership held an online event Leadership Symposium on August 5. Seventy-two people attended from Tokyo Tech and the general public. The event was structured in two parts. In part one, Tokyo Tech students made presentations on various topics in breakout rooms on Zoom, and in part two, Dr. Haim B. Gunner, a professor emeritus of University of Massachusetts and an active researcher at the age of ninety-eight made a keynote presentation.

In part two, Dr. Gunner gave a presentation on his life and research in the microbiology and biotech fields and answered questions from the audience. Dr. Gunner was born in Ottawa, Canada, gained his bachelor's degree at the Ontario Agricultural College, now Guelph University, and his master's degree at the University of Manitoba before contributing to the development of Kibbutz Sasa in Israel and to the establishment of a Regional Center for Arid Zone Research in Be'er-Sheva. He then earned his doctoral degree at Cornell University where he engaged in groundbreaking research on the fungus Fusarium oxysporum, which was then devastating the banana plantations in Guatemala. In 1963, after his post-doc at the Department of Agriculture in Canada, he was invited to serve as professor of soil microbiology at the University of Massachusetts Amherst where he spearheaded the establishment of the Department of Environmental Sciences. He founded two companies while continuing his research, and he now works as Chief Scientist at LidoChem, Inc. 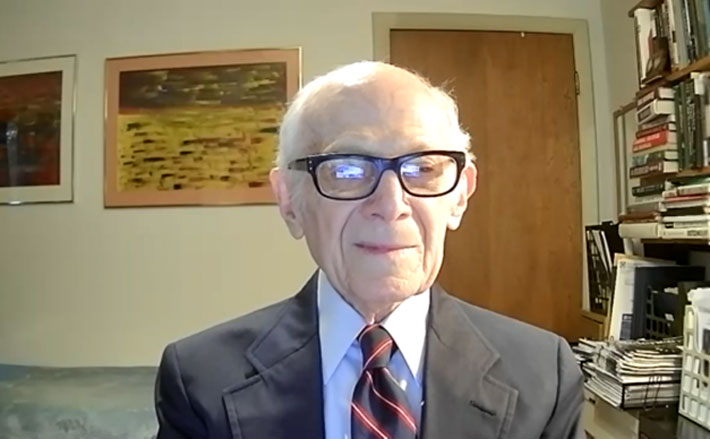 In his presentation, Dr. Gunner described the persecution of the Jews in Eastern Europe in the 1920s and 1930s, the period of his childhood, the role this played in his decision to study agriculture to participate in building a homeland for the Jews in Israel, and how he later became interested in microbiology. He also described his work and research in Israel, Jerusalem and Cornell University. Then, Dr. Gunner explained about his work at the University of Massachusetts where he studied the environmental impact of insecticides and the benefit of biological control by viewing soil as an ecosystem filled with multitudes of microorganisms. Dr. Gunner explained that his research on the fungus Metarhizium led him to found his first company to commercialize a product designed to suppress cockroaches through biological control.

He shared the difficulties he experienced during the start-up and operation of his company and the positive aspects of running a business -- such as watching his idea go to market as a product. Dr. Gunner also spoke about his experience founding another company while continuing his research, and he described his current work at LidoChem Inc. where he works as a chief scientist researching agricultural practices as the ecosystem management of soil systems and studying microorganisms as biological agents to control plant disease and insect pests. Based on his experiences, Dr. Gunner emphasized that students and researchers should not be isolated by the research they are doing but should be sensitive to world affairs and should ask themselves what role they can play as engineers, sociologists and professionals in other fields. He added that people should realize that they are part of an ecosystem, a much larger ecosystem then they think, and recognize that they each have a critical role to play in that ecosystem.

During the Q&A session after his presentation, Dr. Gunner answered some questions that he received from the participants in advance. He gave advice to students who are thinking of starting their own business or pursuing a career in academia, and he commented on points to consider when collaborating with other researchers, on how to cope with demotivation while continuing research and on how to continue doing novel research after doctoral studies. In addition, participants had a chance to ask Dr. Gunner questions on the spot. He gave his thoughts on what we can each do as individuals and as members of a community to bring about positive change in a chaotic and uncertain world. He also described what he regards as the best accomplishment of his long career. Dr. Gunner gave an answer full of optimism to the last question concerning the possibility of the emergence of a fungus that could exterminate an entire population of an ecosystem.

To conclude the event, Jerome Sardido Silla, a researcher at United Nations University and a former ToTAL student who served as chairperson of the entire event, expressed gratitude to Dr. Gunner, who gave an inspiring talk from early in the morning in Massachusetts, to the presenters and facilitators of part one of the event and to the participants of the symposium. Dr. Gunner commented that this event was a wonderful experience for him, and he expressed his thanks to all the participants. 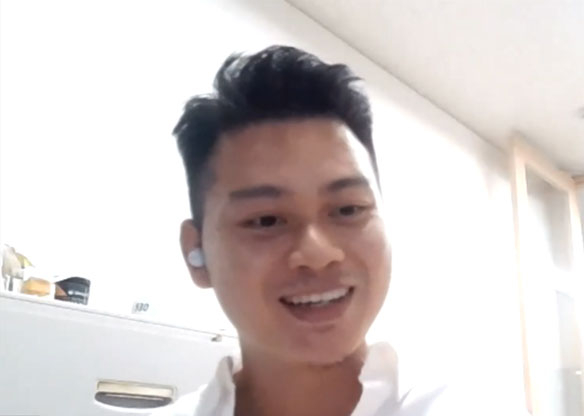